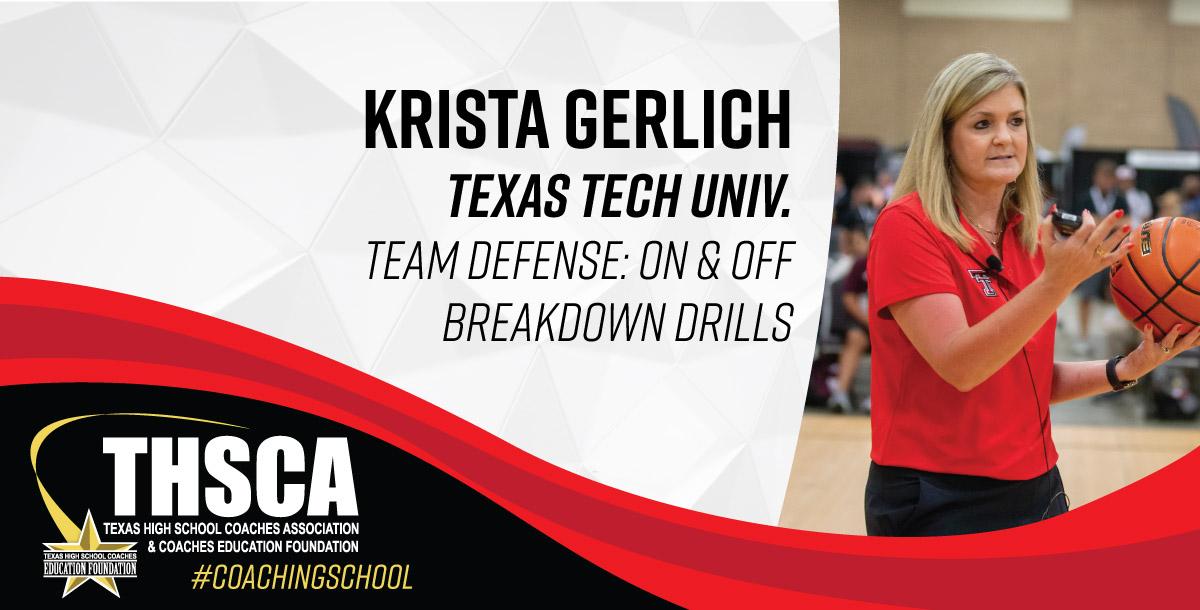 Lecture Title: Team Defense: On and Off Breakdown Drills

Lecture Title: Team Defense: On and Off Breakdown Drills

Krista Gerlich Krista Gerlich, who was born in Lubbock, Texas, grew up throughout West Texas! She was a three-time all-state selection and claimed a high school state championship in 1987 at Sudan H.S. while playing for her father, Jim Kirkland, then junior year moved to Spearman when she graduated with a cross country state championship! She continued her playing career at Texas Tech getting to play for the legendary, Marsha Sharp! As a Lady Raider she was a part of the 1993 National Championship team, was named an honorable mention All-American and a 3- time all-Southwest Conference selection. Statistically she currently ranks third in career assists, third in career three-point field goals made, fourth in three-point field goal percentage and 13th in career scoring. With all that she was able to accomplish as a Lady Raider, Texas Tech chose to retire her #21 jersey making her one of three Lady Raiders to have their jersey number hanging in the rafters.

At the conclusion of her playing career Krista Gerlich chose a career in coaching! She held multiple high school coaching positions throughout the state of Texas before returning to Texas Tech as an assistant coach on staff for her former coach, Marsha Sharp. From there she took the step to take over her own collegiate program by becoming the head coach at West Texas A&M University. Gerlich led West Texas A&M to stellar 168-53 overall record, four consecutive South Division Lone Star Conference titles and three consecutive Lone Star Conference championships in seven seasons leading the Lady Buffs. She is quickest coach in West Texas A&M history to reach each of the 100, 125 and 150-win benchmarks. Her teams appeared in the NCAA Tournament five of her seven years leading the program, including the team’s first Elite Eight appearance in 11 years in 2009. She was named the Lone Star Conference South Division Coach of the Year in 2007 and 2010.

Krista then took over the re-building challenge of Division 1 UT-Arlington where she led the Lady Mavs to three 20-win seasons! In her seven seasons at UTA she accumulated 121 wins to become the all-time winningest coach in program history. Gerlich was named Sun Belt Coach of the Year in 2019, following a successful campaign in which her Lady Mavs tied the program record for single season wins, and picked up the program’s first postseason win as well as UTA’s first Sun Belt women’s basketball regular season title. The team earned an automatic bid to the WNIT, marking the sixth postseason tournament appearance and fourth postseason WNIT appearance in program history.

In August of 2020, Krista accepted the head coaching position for her alma mater, Texas Tech University. Gerlich hit the ground running and led the Lady Raiders to a successful first season of the new era that brought plenty of firsts. Gerlich led the Lady Raiders to the most conference wins under a first-year Texas Tech head coach in 14 years, while steadily improving throughout the season. Under her guidance, Tech also recorded its highest conference finish under a first-year head coach in the Big 12 era. In year two she led the Lady Raiders to 3-top 25 wins, which included a big win over #9 Texas in Austin! Gerlich is married to Bryan Gerlich, who is also a Texas Tech graduate and former Red Raider football player. Bryan is currently the Director of Athletics for Friendship ISD. They have two children, Bryn, who currently plays for the Lady Raiders and Brayden, who plays football for West Texas A&M.

NEW!
Building a Culture of Toughness by Michael Jagacki
Views: 122
$20