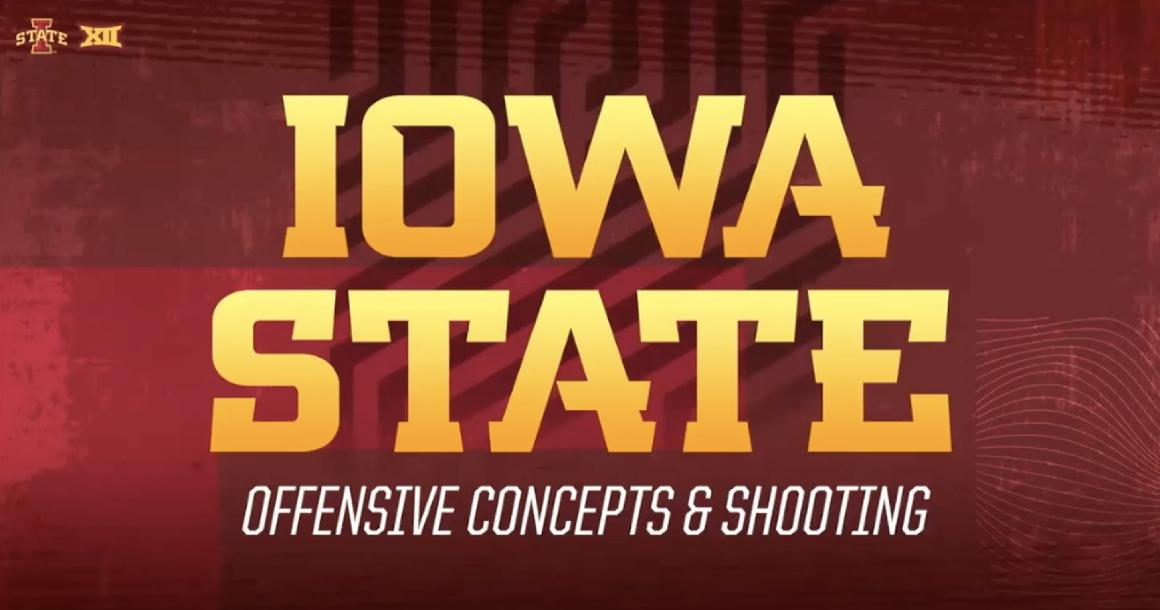 Coach Bill Fennelly is taking us through his Offensive Concepts. He starts by talking about his teams culture and how to maintain a good life balance with basketball. Coach Finnelly then gets into his keys for a succesful offense. Finally Coach Finnelly shows us some great drills he has picked up along his career to build and reinforce his offensive concepts.

The dean of Big 12 women's basketball coaches, Bill Fennelly built Iowa State women's basketball into one of the nation's elite programs. He has instant credibility with student-athletes, administrators and fans, establishing a solid foundation for his program based on academics, athletics and character. That foundation has grown into a model of success that has been matched by very few women's basketball programs across the country.

Fennelly is one of the nation's most respected coaches and his numbers bear witness to the success he has achieved in his career. He has accumulated over 500 career wins (689-326) and averaged 21 wins per season in his 25 years at Iowa State (523-273). His teams have made 21 NCAA Championship appearances in his 30 seasons as a head coach and he ranks among the nation's top 25 active women's basketball college coaches with a .681 winning percentage. Fennelly has guided the Cyclones to an unprecedented 11 NCAA appearances in the last 14 seasons, one of just 15 schools to do so.

Former ISU president Gregory Geoffroy and athletics director Jamie Pollard awarded Fennelly a lifetime contract following the 2006-07 campaign, displaying their ultimate confidence in his ability to lead the Cyclones for the long term.

Fennelly invigorated the Iowa State women's basketball program from the first day he arrived on campus. He took a program that won just 237 games in its first 20 years and guided it to 20 postseason appearances, a pair of NCAA Elite Eight berths, five trips to the NCAA Sweet 16, a pair of Big 12 Championship titles, a regular-season conference crown and 14 20-win seasons in his 24 years at the helm.

Iowa State shocked the women's basketball world when it knocked off top-seeded Connecticut to advance to the school's first NCAA Elite Eight in 1999. Ten years later, the 2009 Cyclones put their stamp on women's basketball history by overcoming a seven-point deficit with 1:30 left to defeat Michigan State and advance to the school's second NCAA Elite Eight. Under Fennelly, ISU made five NCAA Sweet Sixteen appearances, including a streak of three straight from 1999 to 2001 and back-to-back appearances in 2009 and 2010. Iowa State was one of just five schools to reach the NCAA Sweet 16 in both of those seasons.

The Cyclones have been a consistent contender in the Big 12, the nation's best conference, since its inception in Fennelly's second season (1996-97) at ISU. The 1999-2000 ISU squad shared the school's first Big 12 regular-season crown and Iowa State has finished in the upper half of the league's final standings in 17 of its 24 seasons.

Iowa State has enjoyed more success than almost any other team in the history of the Big 12 Championship, winning 26 tournament contests. Iowa State captured Big 12 tournament titles in 2000 and 2001 and played in the championship game six times, most recently in 2019. The Cyclones are third in all-time Big 12 regular-season victories with 219.

Fennelly's leadership produced ISU All-Americans Stacy Frese, Angie Welle, Anne O'Neil, Lyndsey Medders, Alison Lacey, Kelsey Bolte, Chelsea Poppens,Hallie Christofferson and most recently Bridget Carleton and Ashley Joens. His Cyclones have earned all-conference recognition over 50 times, while 14 of his players have been selected in the WNBA professional draft. Lacey was taken as the 10th pick in the 2010 draft by Seattle, marking Iowa State's highest draft pick in school history. Lacey became the first Cyclone to win a WNBA Championship in 2010 when the Storm defeated Atlanta. In 2013, Iowa State was one of just five schools with multiple players selected in the WNBA Draft when Chelsea Poppens (2nd/18th) was picked by the Seattle Storm and Anna Prins (2nd/23rd) went to the Connecticut Sun.

Most recently, Carleton left Iowa State as one of the most decorated player in school history in men’s or women’s basketball. She was honored as an All-American by every outlet and wa the first Cyclone to be named Big 12 Player of the Year. As capstone to her legendary Cyclone career, she became the first Cyclone to earn a position award by the WBCA and be named a WBCA All-American. Carleton was named the Cheryl Miller award winner, honoring the nation’s top small forward and was included in the 2019 Naismith Starting Five.

The turnaround in Ames has been noticed on a national level as Fennelly's squads spent the better part of 10 seasons in The Associated Press national poll, including 34 weeks in the top 10.

Fennelly has served four stints as a member of USA Basketball, most recently capturing the gold medal as head coach at the 2011 World University Games in Shenzhen, China.

Previously, Fennelly won gold as an assistant at the 2009 FIBA U19 World Championships in Thailand, the 2008 FIBA Americas U18 Championship in Argentina and the 1994 U.S. Olympic Festival in St. Louis, Mo.

Fennelly made academics a top priority for his Cyclone squads, and his student-athletes have flourished in the classroom. Every student-athlete who has completed her eligibility under Fennelly has graduated from Iowa State with a degree. Former Cyclone women's basketball players are scattered all over the globe with careers as doctors, lawyers, broadcasters, teachers, accountants and coaches. Many also have continued their playing careers professionally overseas and in the WNBA.

Family
For the Fennelly family, basketball is a way of life. Fennelly insists his wife, Deb, is his all-time greatest recruit, and she has been an integral part of ISU's success, making each new Cyclone feel like a part of her own family. The couple's oldest son, Billy, has gone into the family business and joined the Iowa State staff as the Director of Player Development in July 2010 before moving into an assistant role in 2012. Billy is married to former Cyclone great Lyndsey Medders, who ranks second all-time in assists at ISU. Steven, the youngest son of Bill and Deb, graduated from ISU in 2011 and served as a graduate assistant for the Cyclones (2011-13) before being named an assistant at Cal State-Fullerton in 2013. He began working with the Idaho Vandals as an assistant coach in the summer of 2016 and is currently on staff at Northern Iowa.

Fan Support
Fennelly took a personal approach to expanding the Iowa State fan base into one of most envied crowds in all of women's basketball. The Cyclones' yearly attendance average has grown from 733 fans per game the season before Fennelly arrived at ISU to nearly 10,000 a contest last season, ranking third nationally. ISU's attendance has ranked among the top 11 schools nationally in each of the last 17 seasons, peaking at second in 2013, 2014 and 2019. The Cyclones enjoyed their first-ever sellout crowd in a 2004 WNIT/NIT doubleheader against Saint Joseph's.

Coaching Tree
Fennelly has mentored a number of former assistant coaches and players who have gone on to successful head coaching careers across the country. Brenda Frese spent four seasons on Fennelly's ISU staff before taking over the reins of her own program. She led Maryland to the 2006 national championship. After three seasons on Fennelly's coaching staff, Robin Pingeton was named head coach at Illinois State before being named the head coach at Missouri prior to the 2010-11 campaign. At Illinois State, she guided the Redbirds to a pair of Missouri Valley Conference tournament titles and earned MVC Coach of the Year honors.

Former Fennelly assistant Katie Abrahamson-Henderson was named the head coach at UCF in the spring of 2016 following six successful seasons at the University of Albany, leading the Great Danes to three NCAA Tournaments. Prior to Albany, she spent five seasons as head coach at Missouri State, where she led the Lady Bears to two regular-season Missouri Valley Conference championships, three NCAA appearances and a WNIT crown. Chris Kielsmeier started his coaching career as a student manager for Fennelly. Now the head coach at Cleveland State, Kielsmeier also spent 10 seasons as head coach at Wayne State, the all-time winningest coach in program history with a career record of 237-72, setting his winning percentage at 76.5 percent. Another All-Big 12 performer Heather Ezell is currently an assistant coach at Wyoming.

A native of Davenport, Iowa, Fennelly acquired an extensive background in coaching before becoming Iowa State's sixth head coach on July 10, 1995. Fennelly went 166-53 in seven years as head coach at the University of Toledo. He still is the Mid-American Conference's winningest coach with a .758 win percentage. He compiled six 20-win seasons and six postseason tournament berths at Toledo. Fennelly coached the Rockets to second-, third- and fifth-place finishes in the WNIT and three NCAA Championship appearances. He is a member of Toledo's Varsity "T" Hall of Fame.

Fennelly spent 12 years as an assistant coach, including stops at William Penn University (Oskaloosa, Iowa), Fresno State and Notre Dame. He graduated from William Penn with a bachelor's degree in business administration and economics in 1979.

I Loved this Course everything was very detailed and i was able to learn a lot watching this i highly recommend this video.

Coach Bill Fennelly is taking us through his Offensive Concepts. He starts by talking about his teams culture and how to maintain a good life balance with basketball. Coach Finnelly then gets into his keys for a succesful offense. Finally Coach Finnelly shows us some great drills he has picked up along his career to build and reinforce his offensive concepts.