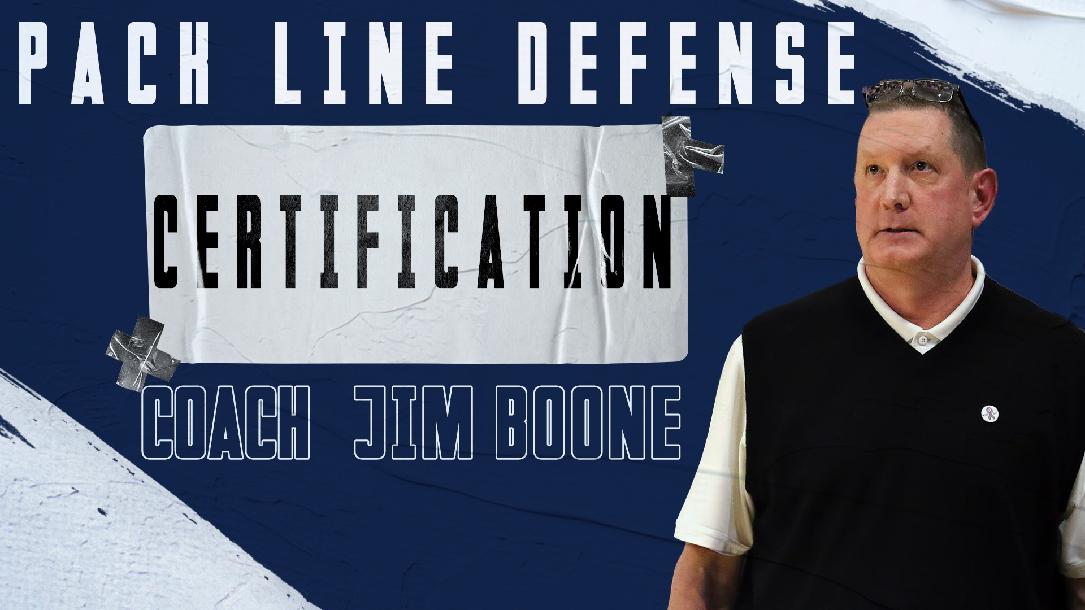 Coach Boone provides you with the teaching tools and Development Drills to maximize ball pressure while sealing gaps and Protecting the Lane. Boone also gives examples of his “jump up, jump back” and “leverage seeking” close out drills which are highly effective in both contesting perimeter three point shots and preventing penetration. His 4-on-4 Conversion Drills teach all elements of the Pack Line Defense and Emphasizes Player Communication. Boone walks you through the complete system from A-Z; including Ball Screen Defense and Defending the Low Post with the Post Trap, through extensive video review of teaching drills and game footage, along with Q & A opportunities, and much, much more.

The Pack Line Defense has proven to be effective at all levels from elementary teams to the NBA, and it will provide you and your Team with an effective defensive approach that allows it to compete successfully with the best teams on your schedule, in your conference or region. And, regardless of your Defensive Philosophy or System, The Pack Line Certification Course, will offer you and your system of play something of benefit. Make this investment and begin the process of developing your players into "Tough, Fundamentally Sound Defenders" by learning with one of the best teachers in the nation, and install this Defense into your system and culture today.

This is a must for any basketball coach looking to improve their defensive play! Coach Boone has done an amazing job of providing a very thorough instruction in teaching Pack Line Defense. This is the most comprehensive teaching course and is put together so well to follow and implement. The access he has given into his programs is awesome!

Coach Boone has done an outstanding job on showing coaches how to teach Pack Line Defense. He covers every aspect of the defense and his attention to detail , along with his teaching points make it easy for any coach at any level to understand how and why the defense is to be played. I highly recommend this for all coaches.

This course on the Pack Line Defense taught by Jim Boone is fantastic! There is not a better instructional course on Pack Line Defense than this one. This course gives you everything you will need to teach the Pack Line defense to your team. Coach Boone has laid out for you the sequence of drills to use to teach the defense. During live practice sessions, his players demonstrate all the drills while coach Boone is explaining and correcting what they are emphasizing with each drill. As he conveys in the course, “It is not what you teach but what you emphasize that matters.” This course reminds me so much of the instructional tapes the late Don Meyer authored. This course will give you the tools to effectively teach and master the Pack line defense with your team.

Much think to Coach Boone for opening up his program to give us a detailed look at how he teaches defensively. It's hard to imagine a more thorough look into the Pack Line system. So appreciative of the game and practice footage along with Coach Boone sharing his thoughts on philosophy and his drills used to implement the system. Even if you don't play Pack there is something here to improve your team defensively!

This is truly a comprehensive course breakdown of the Packline. I love the passion Coach brings to his team in the drills as well as the accountability.

Coach Boone does a great job teaching the Pack Line Defense from the ground up. We benefit greatly from his knowledge and experience. He combines philosophy, X/O's, drills, film, practice plans, and game plans to give one a true picture of how this defense is truly a cultural commitment for a team and/or program.

Great course! Coach Boone dives deep into the Pack Line Defense! Explains and gives great drills to learn and implement! Coach Boone is a great teacher but even better person! Highly encourage coaches to purchase this course! Well worth it!!!!

Thank you Coach Boone. Great teaching content and detail available to help us prepare for our season with implementing this defense.

Great course, would highly recommend it. My only regret was that I didn't buy it years ago. Learned a lot about defense and has drastically improved our team defense this season from last year. Helps us to compete with other teams in our district/region that are quicker or have a dominant big man. We play this defense against every opponent and do not have to scout "plays" so much as "actions". We work on defending multiple actions daily and thus we are able to play this defense constantly rather than having to change defenses based on opponent. By taking away driving lanes and trapping in the post, naturally teams are forced to shoot deeper shots. Started putting this in the first two weeks we were allowed to practice back in November and our team is getting better all the time with it. Looking forward to building on it and getting better throughout the rest of our season and future seasons. This will be the staple of our program.

Anyone who is interested in running the Pack Line defense this is a must have. Coach Boone does an excellent job in breaking down the overall defense to the nuts and bolts. The added videos are great visual tool in teaching the basic fundamentals and principles to build your overall defense. Even if you are not going to run the Pack Line it is still a great tool in teaching fundamental defensive skills, great points on culture, and what it means to be a basketball coach at any level. Coach Boone thank you for giving all you have to basketball in trying to make the overall game of a better product by sharing your knowledge and experiences.

It was an excellent course that is 100% worth your time and money. Jim Boone goes in-depth to all aspects of the Pack Line system but explains it in a way that is easy to understand. We implemented Pack Line with a varsity boys team that won 4 games in 2 years giving up 72 PPG. We have won 21 games the last 2 years while playing some of the best teams on our schedule very competitively. We also set the school record for defensive points allowed last season.