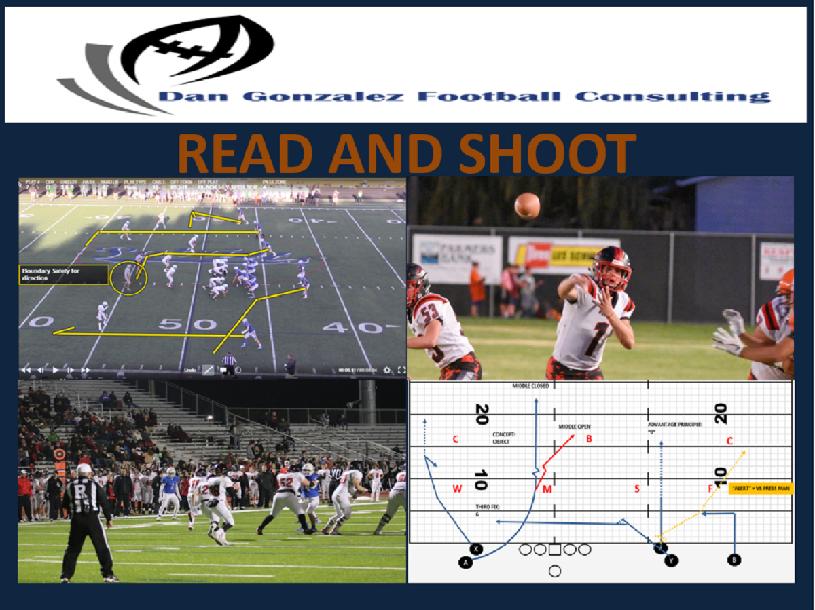 Coach Gonzalez shares this season’s edition of his READ AND SHOOT installation teaching videos, which had only previously been made available to his consulting clients.   He gives the explanation of not only each play concept and coaching point, but how each piece fits into the rest of the puzzle and how the teaching principles will allow for carry over between concepts.

This year, there is a ton of new pass combinations, derived from study of defensive trends and responses from the last couple years.  Further, Coach Gonzalez offers the terminology in two different language versions that he has created.

In eleven seasons as a college and high school football coach, Dan Gonzalez has coached or recruited the single season or career passing leader at every school he has coached. His career began when he was given the responsibility of handling passing game quality control during his senior season as a player at the University of Texas. After graduation, he served one season as an assistant at Ranger College, and then moved on to serve as the quarterback coach at Abilene Christian University for two seasons before returning as the offensive coordinator at Ranger College. Gonzalez then spent two years as the offensive coordinator at North Lamar High School in Paris, Texas. Making the switch from a wishbone offense to a multifaceted passing attack, North Lamar High School enjoyed back-to-back winning seasons for the first time in 20 years. Moreover, his quarterback, a converted safety, emerged as the 18th-ranked prospect in the nation. After two seasons, he joined the Lenoir-Rhyne University (formerly Lenoir-Rhyne College) staff in January 2002 as the quarterback and wide receiver coach and co-offensive coordinator. During his first season at Lenoir-Rhyne University, the team’s quarterback led the South Atlantic Conference in passing and set single-season school records for most yards, touchdowns, and completions. Three different quarterbacks in three seasons each netted top 10 passing seasons in the school’s record books, including the second- and fourth-best receiving careers in school history. He then returned for a second stint at ACU. Gonzalez graduated from The University of Texas at Austin, where he played football for four years and lettered as a wide receiver on the 1994 Southwest Conference championship team. He has two Master’s degrees from Liberty University, including an MBA. Gonzalez and his wife, Lori, reside in the Dallas suburb of Allen, Texas with their three children, and offers consulting services to high schools across the country, resulting in record-setting passing games, deep playoff runs, and state championships.

Dan does a great job of teaching these concepts. He walks you through the concept then uses video to show what it looks like. No one is better at teaching the passing game.

If you know about Dan Gonzalez and his passing game - you know he gives you the keys to a great passing attack. With the install courses - you not only have the keys - you have step by step instructions how to drive it!!! I highly recommend!

This series of install videos ending in 7 and 8 is amazing and thorough. It structures the learning for the players and coaches in a progressive way that builds off of each other. These passing concepts can work in any offense. Here coach is addressing ways for any coach who wants to strengthen his teams passing game production including allowing the QB to learn reads that are simple. Coach Dan strikes again with his offensive brilliance!