A SINGLE WING STYLE POWER RUN SERIES FOR USE IN ANY OFFENSE- FEATURING POWER, SWEEP, COUNTER XX AND WEDGE. 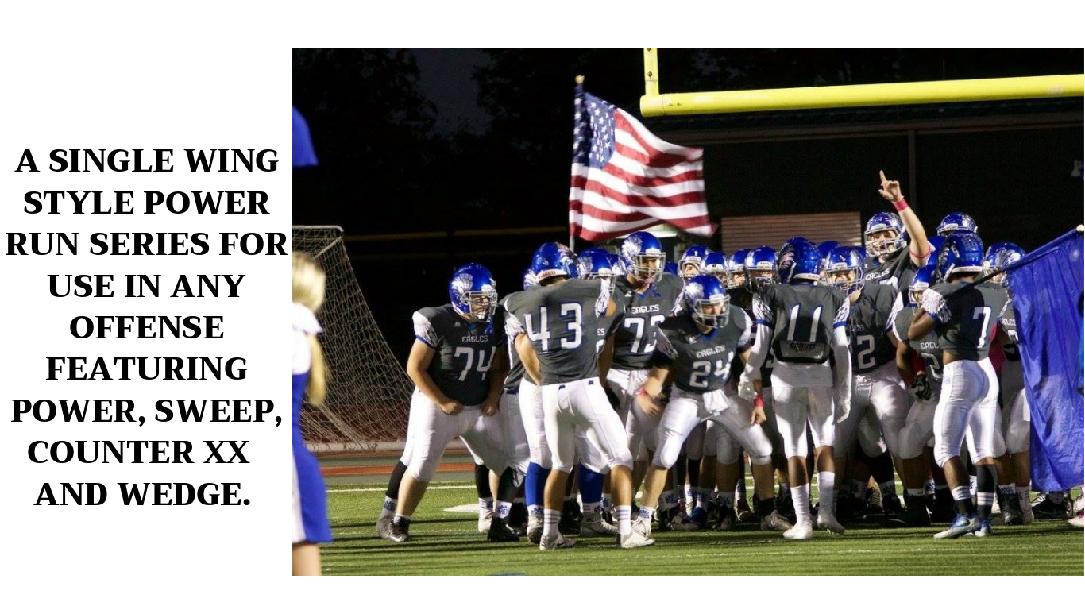 In this course, Coach Woolley will use presentations and video to share with you the philosophy behind the offensive series, tips for what to look for when selecting personnel, basic formation, line splits, blocking rules and techniques for the 4 base run plays.

Learn the in's and out's of these 4 base plays that have been the driving force behind Coach Woolley's successful tenure as Head Coach at Scott HS (Taylor Mill, KY). These plays were the foundation of his high powered rushing offense which averaged 6.57 YPC, a touchdown run every 12.2 carries, increased the team's win percentage by 158% and increased points scored per game by 124% when compared to all previous seasons in school history.

As a player (1994-1997), Coach Woolley was an All-State Defensive Lineman and member of 3 State Championship and 1 State Runner-Up teams at Beechwood High School in Fort Mitchell, KY. At the collegiate level, Coach Woolley was a 4-year letterman and Honorable Mention All-American Defensive Lineman at Georgetown College (KY) where the teams won National Championships in 2000 and 2001, were National Runner-Up in 1999 and were Mid-South Conference Champions from 1998-2001.

From 2002-2008 Coach Woolley served as an Assistant Coach at Lloyd Memorial High School and from 2008 to 2012 he served as Assistant Head Coach and Offensive Coordinator at Scott High School.

After taking over as Head Coach in 2012, Coach Woolley helped transform Scott from a perennial losing program to a Top 10 team in Northern Kentucky and in Class 4A.  In his 7 years as Head Coach, Scott increased its winning percentage by 158% and increased points per game by 124%, as compared to the previous 34 years in school history.

Coach Woolley led Scott to its first football championships: 2015 and 2017 District Champions, 2018 District Co-Champions and 2015 Regional Runner Up. During Coach Woolley’s tenure, Scott won 5 playoff games (as compared to 1 in the previous 34 years) and were ranked as the #5 team in class 4A following the 2015 season.  Coach Woolley has been recognized by his peers by being named K.F.C.A. District Coach of the Year in 2012 and 2015. After the 2018 season Coach Woolley resigned his position as Head Coach to spend more time with his growing family and served as Offensive Coordinator at Scott High School in 2019-2020, where the team was once again District Champions and Regional Runners-Up during the 2019 season. He is currently the RB coach at Simon Kenton High School

Under Coach Woolley’s guidance, multiple players were recognized at the local and state level. These awards include 4 different K.F.C.A. District Players of the Year (2015-2017, 2019), 2017 and 2019 N.K.A.C. Player of the Year, multiple players on All-State Teams, 2019 That’s My Boy Finalist, 2018 Cincinnati Enquirer NKY Male Athlete of the Year and a 2018 KY-TN Border Bowl Participant.

Coach Woolley consults with coaches across the nation and several foreign countries on his version of the Single Wing Offense.  He has spoken at national clinics including the 2016 and 2019 Cincinnati Glazier Clinics and the 2018 Single Wing Conclave in Wilkes Barre, PA.

Dan gives a great presentation of his Single Wing offense! He goes into detail on the complete play system with detailed diagrams, rules and variations! He also gives a detailed video analysis to give the viewer a visual representation of the plays! This video series is a must see for anyone who wants to learn or expand their football knowledge of the Single Wing Offense! A+++ 5 Stars!

A well put together course, coach does a phenomenal job of showing detail and explaining the Scheme's. I would recommend this course to all coaches!

This was a great course! I especially enjoyed the in depth look coach took with explaining and showing film of Power and Counter! Loved the course

Coach Woolley does an incredible job of presenting- 4 Base Plays from his Single Wing Offense, together with wonderful cut-ups of the plays. I would strongly suggest this course for coaches looking into traditional high school offenses that use the run game to control the tempo & clock in high school games.

Great information on implementing SW package. Whether you want to go wholesale SW and use this as a starting point or just have it as an offensive package, it is a presentation filled with useful information and user-friendly terminology.

Coach Woolley does a great job with this presentation! Great job in describing the plays and breakdown the film. It’s something that every offense can use either as complete offense or change of pace. I highly recommend this for anyone interested in the SW!

Coach Woolley's course on his flavor of the Single Wing is very well done. He goes through the core running plays from his Power series with thorough explanation and film to back it up. If anyone is interested learning about the Single Wing or looking to further their education on the offense, I recommend this course.

Great presentation! Even if you don't run this system exclusively, it can be used an effective situational package within your offensive system.

As a spread football coach I am always looking for something to spice up my short yardage and goal line package. This presentation gives me some great ideas moving forward. Worth the purchase for any OC.

Coach Wooley does a great job explaining the SW offensive system. The unique way he runs his Counter-XX is very effective and safe from the typical ever-present fumble risk on that exchange...worth taking a look at! Many take-aways and the film with breakdown on common issues is perfect!

You just booked "A SINGLE WING STYLE POWER RUN SERIES FOR USE IN ANY OFFENSE- FEATURING POWER, SWEEP, COUNTER XX AND WEDGE. "

A SINGLE WING STYLE POWER RUN SERIES FOR USE IN ANY OFFENSE- FEATURING POWER, SWEEP, COUNTER XX AND WEDGE.

In this course, Coach Woolley will use presentations and video to share with you the philosophy behind the offensive series, tips for what to look for when selecting personnel, basic formation, line splits, blocking rules and techniques for the 4 base run plays. 1. Power 2. Counter XX and XX Keep 3. Sweep Strong 4. Wedge Learn the in's and out's of these 4 base plays that have been the driving ...