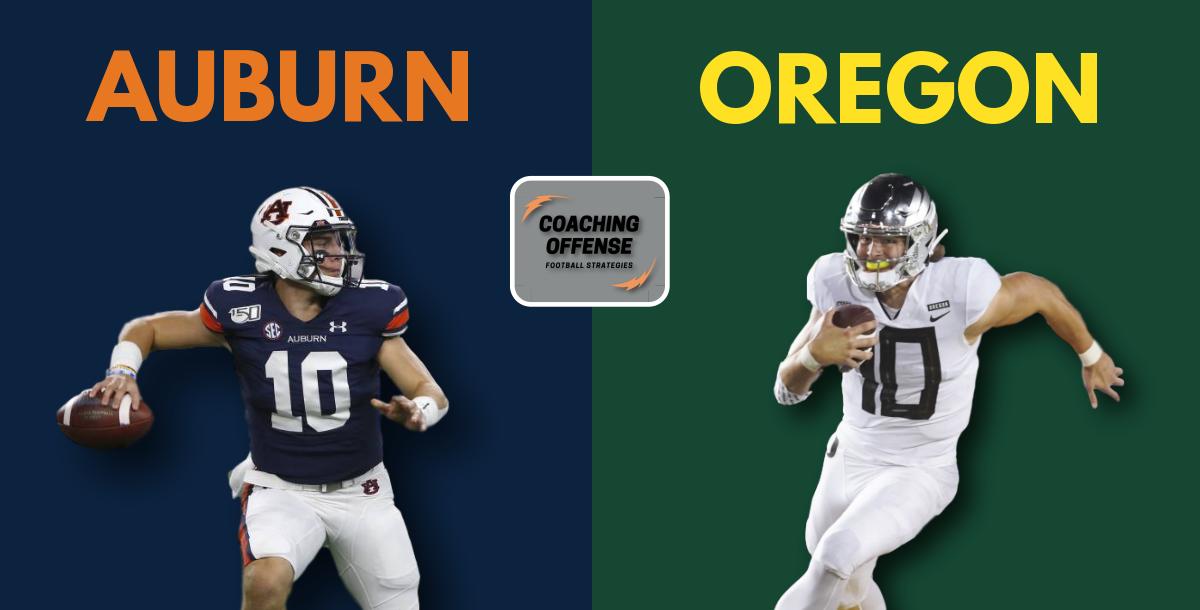 The 2019 Season is here and we have broken down 16 of the best new plays from the Auburn vs Oregon game.

In this thrilling first week matchup, Oregon and Auburn went toe to toe in a leadoff game that would significantly impact their entire seasons opportunities at the CFB Playoff system.

Both Auburn and Oregon demonstrated two offenses that were highly effective and also creative.

In the end, Auburn won out however by sticking to their core plays and out executing Oregon when it counted the most.

But there were many plays from each offensive system that are worth a much deeper look and could be beneficial to your team.

In this course you get not only a full playbook diagram of each play but also the position assignments. You also get a fantastic video walkthrough of the play along with the key strategies necessary for proper execution.

Finally, each play has the clip conveniently attached for you to view exactly how the play was run in the game.

For lifetime ownership of these strategies, Book it now!

At East Central Community College he coached Running Backs and Tight Ends in 2013.

His High School coaching experience then started at Denham Springs in Louisiana where he coached Offensive Line from 2014-2016.

As an Offensive Coordinator he coached in Morgan City HS, Louisiana in 2017 and now currently coaches the Offensive Line at Patterson High School, Louisiana.

Great course . Helps me get insight

Great course . Helps me get insight

Helpful. Great resource for someone looking to add a few wrinkles to what you already do.

Coach Wilson does a great job breaking down two of the most dynamic offenses in college football. This is a great concept to review some of the innovations we are seeing in the game today. What's more, Coach Wilson does a fantastic job of explaining the assignments of all the players including the blocking. I will be looking for more of these films from Coach Wilson!