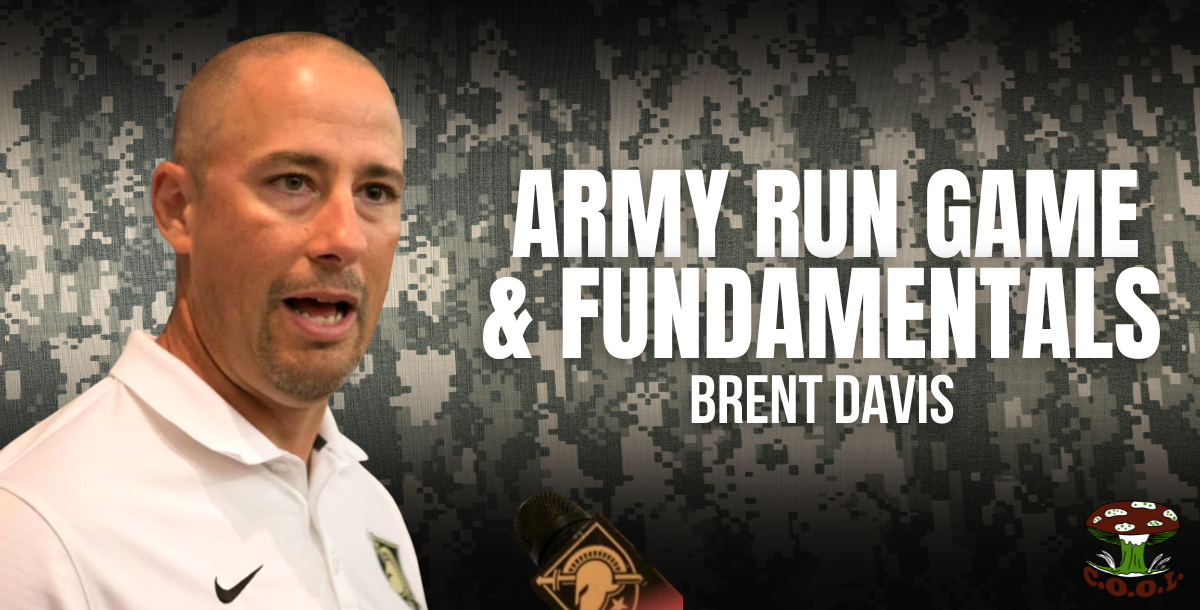 Army West Point Offensive Coordinator Brent Davis uses team objectives and practice film to break down the importance of creating an identity, commitment as a staff, and the ownership of standards utilizing base philosophy, superior effort, as well as competitive courage through repetition.

Brent Davis is in his sixth season with the Army West Point football team serving as the offensive coordinator and offensive line coach.

With help from Davis the Black Knights have enjoyed success over the past three seasons posting a 29-10 record, including back-to-back wins over Air Force, three-straight wins over Navy and three consecutive bowl-game victories.

Under his guidance, the Cadets’ offense has ranked in the top three nationally the last three seasons. Last year the Cadets finished second with 312.5 rushing yards per game. They also ranked first in three different categories to close out the year: third down conversion percentage (.571), fourth down conversion percentage (.861), and time of possession (38:33). Davis coached six players to Phil Steele All-Independent Team honors in 2018, including two linemen in Bryce Holland and Jaxson Deaton.

In 2017, Davis was honored as a nominee for the Broyles Award, which is given to the top assistant coach in the country, after leading the Black Knights to an NCAA rushing title with 362.3 yards per game. Army also set a new Academy record scoring 50 rushing touchdowns to finish second in the nation in that category. The Cadets led the country in total rushing yards with 4,710 on the year as well.

That year quarterback Ahmad Bradshaw broke the single-season service-academy rushing record with 1,746 yards, which was high enough for fifth in the country at the end of the year. Bradshaw finished sixth in the nation with 134.3 rushing yards per contest. He averaged an impressive 7.21 yards per carry, which was also in the top 10 nationally.

Offensive lineman Brett Toth was a participant in the 2017 Reese’s Senior Bowl and the East-West Shrine Game. Toth was also a member of the Associated Press All-Bowl Team, while linemate Holland was awarded with a spot on the ESPN All-Bowl Team.

In 2016 the offensive unit ranked second in the nation in rushing offense with 339 rushing yards per game and 5.6 yards per rush. Army ran for over 500 yards twice that season and racked up 4,412 total rushing yards, which was the third most in Academy history for a single season. Under Davis, the Black Knights ran for a then Academy record 46 touchdowns, which eclipsed the 1945 national championship team that had 45 that season. Army was aided that year by fullback Andy Davidson and Bradshaw, who both ran for over 900 yards. Davidson rushed for 12 touchdowns for eighth all-time in a single season and the most since Trent Steelman achieved 12 in 2011.

Davis led a Black Knights offense in 2015 that was 12th in the nation with 244.3 rushing yards per game. He guided six players to 100-yard rushing games during the season, including two from Bradshaw and Aaron Kemper. Bradshaw and Chris Carter made their career debuts under Davis and ran and threw for 100 yards in their first game in an Army uniform.

Prior to Army, Davis spent four seasons as Georgia Southern’s offensive coordinator and offensive line coach in his second stint in Statesboro, Ga. A veteran triple option coordinator, Davis helped the Eagles to three consecutive trips to the national semifinals. Georgia Southern boasted the top rushing offense in two consecutive seasons in 2011 and 2012.

Davis also coached at Georgia Southern from 1997-05 when he guided the offensive line and running backs as the Eagles won seven conference championships and made eight playoff appearances during that time. With Davis’ charges blocking up front, Georgia Southern captured four consecutive FCS rushing titles as well as the 2004 scoring title with 47.0 points per contest. Eight linemen earned All-Southern Conference honors and three were voted All-American. Charles Clark won the Jacobs Blocking Trophy in 2002, presented to the best offensive lineman in the Southern Conference.

Davis guided the running backs from 1997-99 and worked with Adrian Peterson, the 1999 Walter Payton Award winner and SoCon Offensive Player of the Year. Peterson collected All-America honors and amassed over 2,600 yards in 15 games. Peterson was drafted in the sixth round by the Chicago Bears and played eight seasons in the NFL.

Davis later moved to coaching the offensive line before departing for Virginia Military Institute as its offensive coordinator. Davis spent four seasons at VMI, his final season as interim head coach, before returning to Georgia Southern.