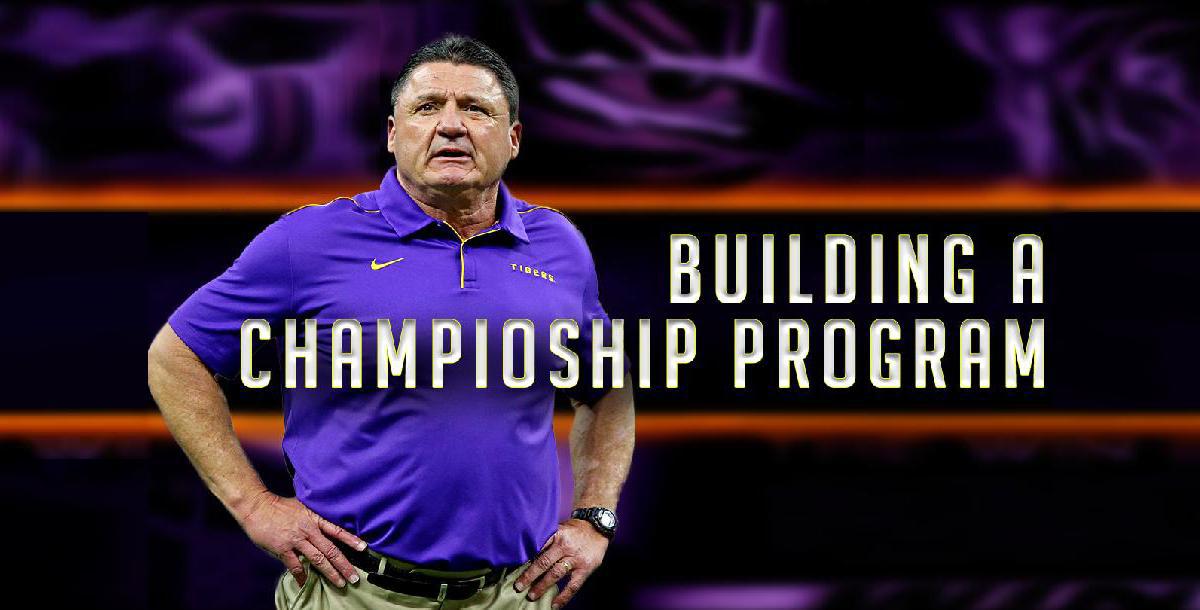 When it comes to building a championship football program, there’s none better than LSU head coach Ed Orgeron. A driven leader with a vision on how to achieve success, Orgeron needed only three years to fulfill a pledge he made at his introductory press conference on Nov. 26, 2016 when he vowed to “build a championship program at LSU.”

Orgeron did just that in 2019, earning numerous National Coach of the Year honors on his way to leading LSU to the most dominant season in college football history with a 15-0 record and the CFP National Championship.

But Orgeron’s definition of a championship program goes much farther than winning championships on the football field. It’s also about developing young men, both on and off the field; it’s about fielding a team of high-character players that are determined to compete at the highest level on the field, while pursuing an education off the field; it’s about players focused on the success of the team, not individual awards; it’s about players doing the right thing, all of the time. It’s known as the LSU Standard of Performance, not just on Saturday nights during the fall, but year-round.

And with that mentality, which starts at the top with Orgeron – a coach who never takes credit for his team’s success, but instead praises his staff and his players – LSU stormed its way to the 2019 national title, winning 12 of 15 games by double-figures and beating seven Top 10 opponents along the way. LSU had five wins over teams that finished the 2019 season ranked in the Top 10.

Since taking over the Tigers four games into the 2016 season, Orgeron has guided LSU to a 40-9 mark – which ties for the most wins by any coach in school history during the first 49 games of their career. He’s also led the Tigers to five postseason victories – one in the SEC Championship Game, two bowl games and two in the College Football Playoffs.

Of LSU’s 40 wins under Orgeron, 31 have come by double-figures and 12 have been over Top 10 teams. The 12 Top 10 wins rank as the second-most for any coach in LSU history, trailing only Les Miles who won 16 games over Top 10 opponents in 12 years.

LSU has a 24-7 record under Orgeron against SEC teams, which includes a 37-10 win over fourth-ranked Georgia in the 2019 SEC Championship Game.

Under Orgeron, the Tiger program has produced 11 first team All-Americas, four national award winners, including the 2019 Heisman Trophy winner in quarterback Joe Burrow, and 32 NFL Draft picks, which includes nine in the first round. In the 2020 NFL Draft, LSU set an SEC record with five first round picks and tied the all-time mark with 14 players selected during the seven-round event. Quarterback Burrow went No. 1 overall and LSU became the first school in the history of the NFL Draft to have a quarterback, running back (Clyde Edwards-Helaire) and wide receiver (Justin Jefferson) picked in the first round.

When it comes to recruiting, there’s none better than Orgeron and his staff who continue to assemble the best roster in college football with a focus that includes keeping the best players in Louisiana at home, while also attracting the top talent from coast to coast.

Now entering its fourth full season under Orgeron, LSU has used the “One Team, One Heartbeat” philosophy along with the ability to “block out the noise” to become the premier program in college football.