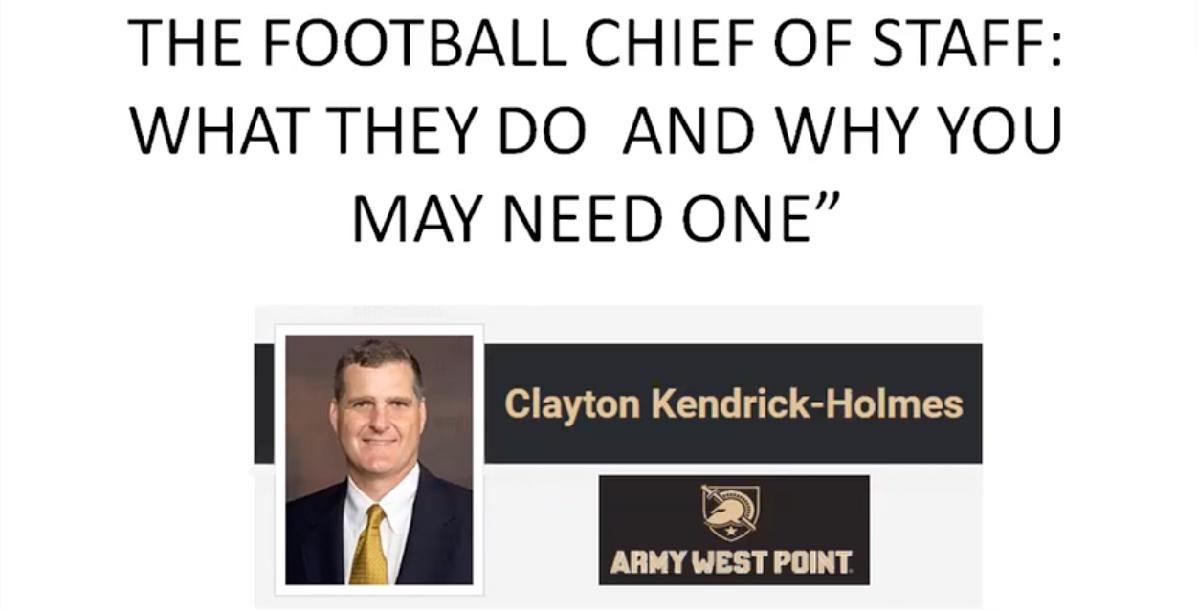 Army West Point's Chief of Staff, Clayton Kendrick-Holmes, for  discusses what role a Chief of Staff has and why organizations should get one.

Clayton Kendrick-Holmes was named the Director of Football Operations in August 2018. He came to West Point after a successful 13-year stint as the head football coach at SUNY Maritime College. He started the Privateers NCAA Division III football program from scratch in 2005 and turned it into an established, championship-level program. Kendrick-Holmes was also instrumental in the establishment of the Eastern Collegiate Football Conference and has served in several regional and national posts to include: NCAA East Region Advisory Committee, NCAA National Football Championship Committee, American Football Coaches Association Board of Coaches, AFCA Division III Coaches’ Poll and the AFCA Region 1 All-American Committee. Kendrick-Holmes’ overall record at Maritime was 63-55 (.534) with a conference record of 39-22 (.639) and was 15-5 (.750) against Maritime Industry rivals; Massachusetts Maritime, Maine Maritime and the U.S. Merchant Marine Academy. He led the team to an undefeated regular season and NCAA tournament playoff berth in 2010 and his final two seasons at Maritime concluded in bowl game invitations. He served as the team's defensive coordinator from 2016-2017 and as offensive coordinator from 2005-09, and 2014-15. In 2010, Maritime football received unprecedented levels of national attention as the wins piled up and Kendrick-Holmes’ impending mobilization to serve in Afghanistan as a Naval Reservist drew near. The team finished the regular season ranked 33rd in the national poll and ninth in the ECAC Lambert-Meadowlands D3 poll. Kendrick-Holmes received Coach of the Year honors from the American Football Coaches Association (Region 1), D3Football.com (East Region) and the Eastern Collegiate Football Conference. He was a national finalist for the Liberty Mutual Coach of The Year award and was nominated by the NFL’s New York Jets for the inaugural Don Shula Coach of The Year award. The 2010 undefeated season and berth in the national championship playoff is the crown jewel in the program’s short history.

HOW TO GET RECRUITED AS A HIGH SCHOOL ATHLETE - ALL ATHLETE RECRUITS by allathleterecruits
Views: 1308
$75

You just booked "Clayton Kendrick-Holmes - The Chief of Staff Role"