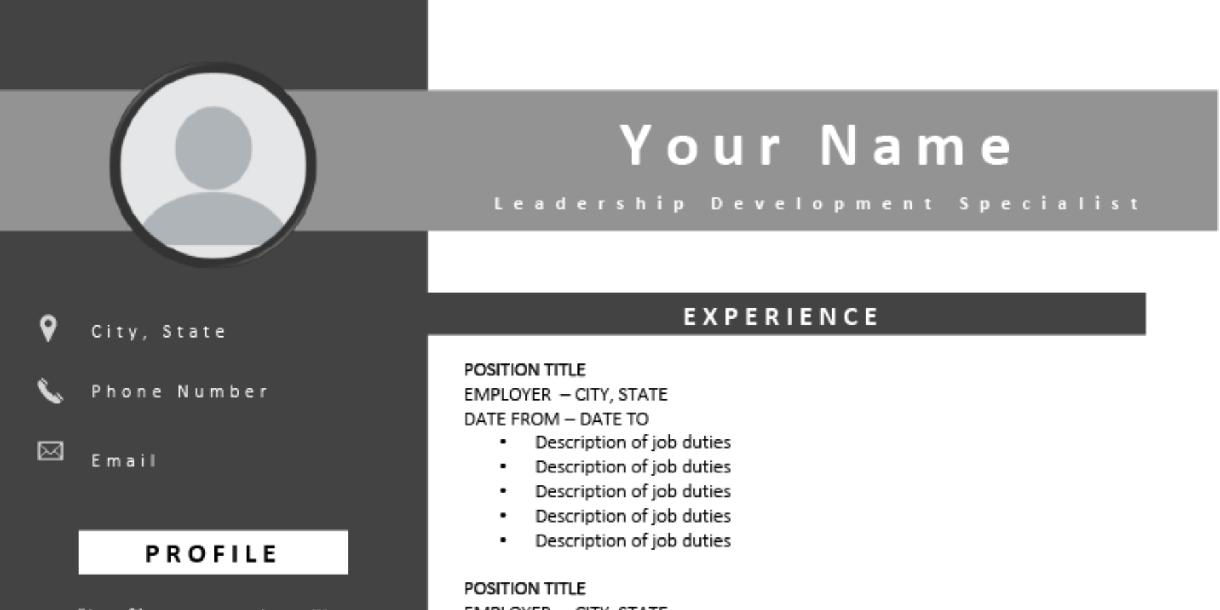 Writing a resume isn't easy. Stop the never-ending struggle with Word! You’re tired of being passed over for positions that you know you’re the right fit for. You want to make your resume writing process a heck of a lot smoother.

Stand out with this eye-catching resume template. Don't worry about creating a resume from scratch, use this free resume template to kick start your job search from its launch point! Find out what you can accomplish with the power of a well-designed resume. Personalization is key, this template is a tool to catch the attention of whoever looks at it. It’s your story to tell within the margins, everything you need is there on the page. You can either run with it, or use it as the basis for your own unique resume.

Don’t worry about technical issues or design skills. This template makes the entire process more simplistic. You can change just about every aspect of the template. If you’re not happy with the profile image, swap it out with a new one. If you think the color, or font isn’t your style, choose something that better reflects the message you want to send.

Give your job hunt the boost it needs by showcasing your talents. All you need to do is make it your own!

This resume template is a great foundation to start a professional resume for any Coach, Athletic Director, or Professional. The purpose of this template is to guide you in the creation of a resume that clearly outlines your objectives in your job search, career direction, and experience background. A resume is the first impression that any potential employer has of you. It is an absolute necessity to capture their attention in the first 10 seconds that they view your resume. This template is certainly an attention grabber!

With seven years of coaching experience, including coaching at Otterbein University and two stints in Indiana's MIC conference, Coach Cross has seen a thing or two when it comes to the organization of a football program. Pairing his coaching experience with Bachelors’ degrees in Sports Management & Business, as well as a Master's in Business Administration, he is a coach who understands the importance of the delicate balance between football knowledge, team culture, and program organization.

In addition to his hands-on coaching experience, Coach Cross has spent countless hours of professional development devoted to football principles, techniques, and schematics. Having attended The Ohio State University's coach's clinic the past seven years, as well as a myriad of lectures and programs at the Indianapolis, Cleveland, and Cincinnati Glazier Clinics, Coach Cross brings a unique perspective of passion and knowledge of the sport to his coaching method.

Coach Cross spent three years as an assistant coach at Circleville High School (OH) where he worked with the offensive line and inside linebackers. He followed that up with a Graduate Assistancy at Otterbein University (OH) coaching O-line. When his wife of four years took a job opportunity back Indiana, he was tasked as an Assistant Coach for Coach Graves at Pike High School (IN). After coaching at Pike, Coach Cross made the transition to being a Freshman Offensive Coordinator for John Rodenberg’s Lawrence Central program (IN). Most recently, Coach Cross was the Offensive Coordinator at Crispus Attucks High School (IN). For the upcoming fall 2021 season, Coach Cross is bringing his offensive expertise to Juco. startup ALN Sports Prep. Academy in Indianapolis, Indiana.

Writing a resume isn't easy. Stop the never-ending struggle with Word! You’re tired of being passed over for positions that you know you’re the right fit for. You want to make your resume writing process a heck of a lot smoother. Stand out with this eye-catching resume template. Don't worry about creating a resume from scratch, use this free resume template to kick start your job search from it...