by The Spread Offense 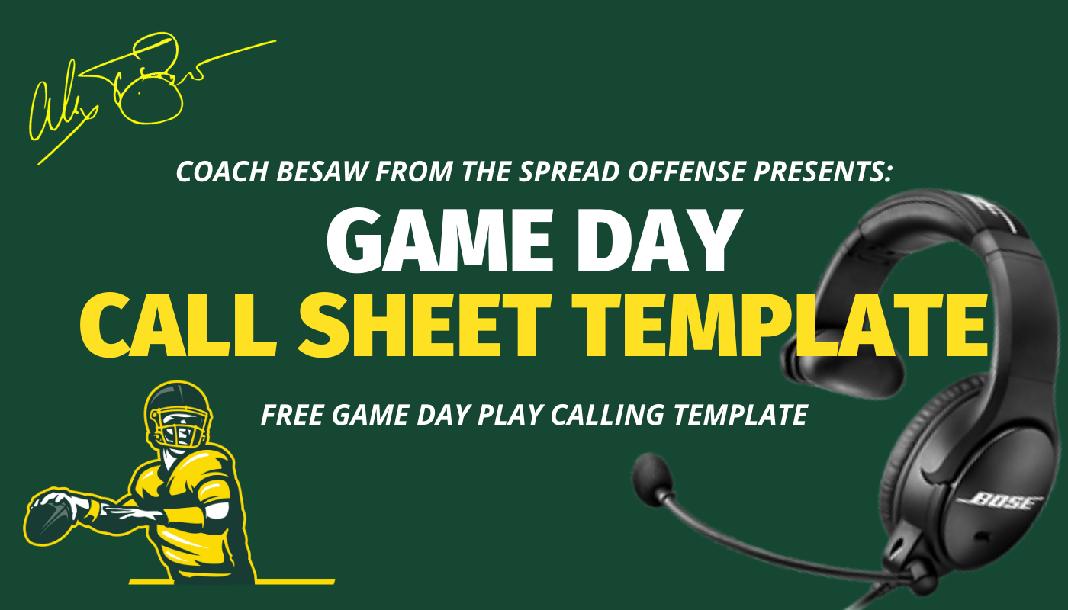 Build your game day call sheet with this template.

You can print online at a nearby FedEx Office store to keep the margins the same, and even have it laminated.

"The Spread Offense" (spreadoffensefootball.com) was founded by Alex Besaw who was born and raised in the Spread Offense (Eugene, OR) but currently reside in Salinas, CA as a High School Varsity OC/QB coach for the past 8 years.

Alex always been around the game of football and has studied the Up Tempo - No Huddle Spread Offense for the last 15 years. Alex played QB in the Spread Offense in High School, but chose to pursue baseball in college as a pitcher. He was drafted by the Tampa Bay Rays in 2009, but turned it down to pitch for UCF. His career came to an end at UCF when he tore up his throwing shoulder and could no longer throw.

While at UCF, he learned the art of 3 Dimensional coaching first hand from Jeff Duke who has revolutionized the coaching framework. Shortly after graduating from UCF, Alex began coaching football and has been a QB coach and Offensive Coordinator in Salinas for the past 8 years.

Solid template. Will use and tweak a few things.

Great starting point that can be useful for any Offensive Coach in any system. Clean & Clear which is one of the most important aspects of a Call Sheet!

Excellent template. Well organized I plan on using it this fall.

Well put together call sheet, simple yet gets the job done!

Loos easy to use, and allows for a play caller to keep track of the tops plays week in and week out

A useful template of how your call sheet should look on game day. Some stuff (routes) seemed unnecessary but overall a good example and can use when making own sheet.

Login to Download Add to Wishlist
Have a coupon?

Build your game day call sheet with this template. You can print online at a nearby FedEx Office store to keep the margins the same, and even have it laminated.