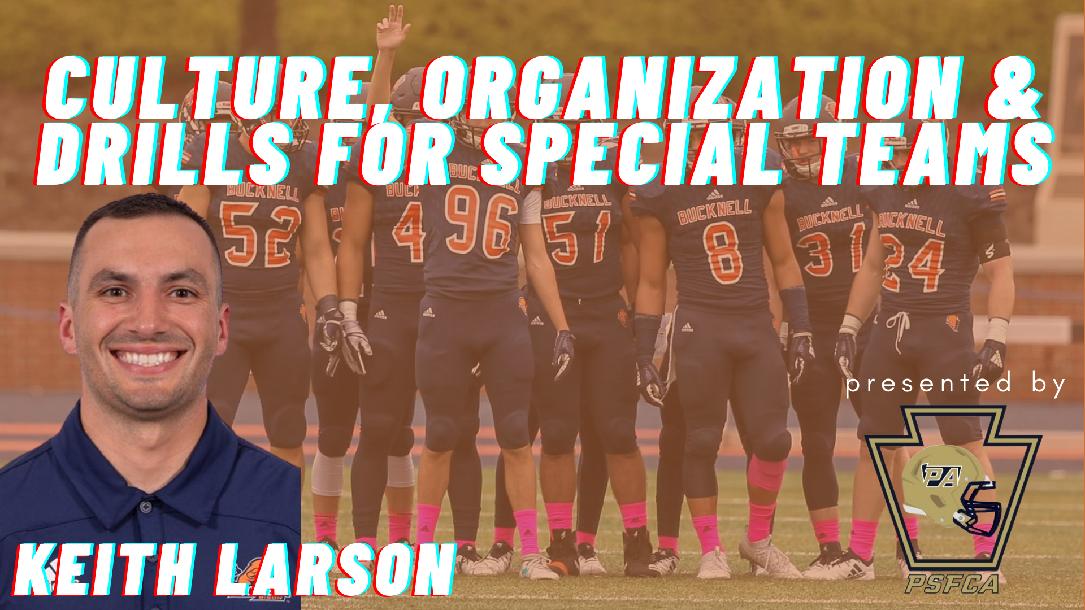 Culture and organization pave the way to greatness when it comes to team sports, creating a positive atmosphere when athletes can thrive and elevate their game. Drills are the ideal way to perfect your vision and standards.

In this course, Coach Keith Larson discusses the culture, Organization, and drills he instills into his special teams. He goes through the team's goals as a unit, S.W.A.G., and assignments. He also demonstrates the drills he incorporates into his practices.

Simply click the ‘Book This Course’ button at the top right of this page, place your order, and you’ll immediately be logged into the training with full access. Take a look into Coach Keith Larson's full special team development today!

Keith Larson was added to the Bucknell football staff as a wide receivers coach on February 28, 2019. He was elevated to special teams coordinator in November 2020 and switched to defensive backs coach ahead of the 2022 campaign.

Larson was on the Rensselaer Polytechnic Institute staff since the spring of 2016. Originally the defensive backs coach, he was promoted to special teams coordinator ahead of spring practice in 2018. Over the course of his final two seasons in Troy, the Engineers went a combined 18-5 (8-2 Liberty League) and won two Liberty League titles. As Liberty League champions, they qualified for the NCAA Division III Championship each year; in 2018, they advanced to the NCAA quarterfinals for the second time in program history.

Before his time at RPI, Larson worked with the defensive backs at Robert Morris University (Ill.) as a graduate assistant coach for the 2014 and 2015 campaigns. There, he worked closely with the defensive coordinator, helping the Eagles finish 8-3 in 2014.