Effective Team Tackling with the 3 C’s: Contact, Chase and Converge 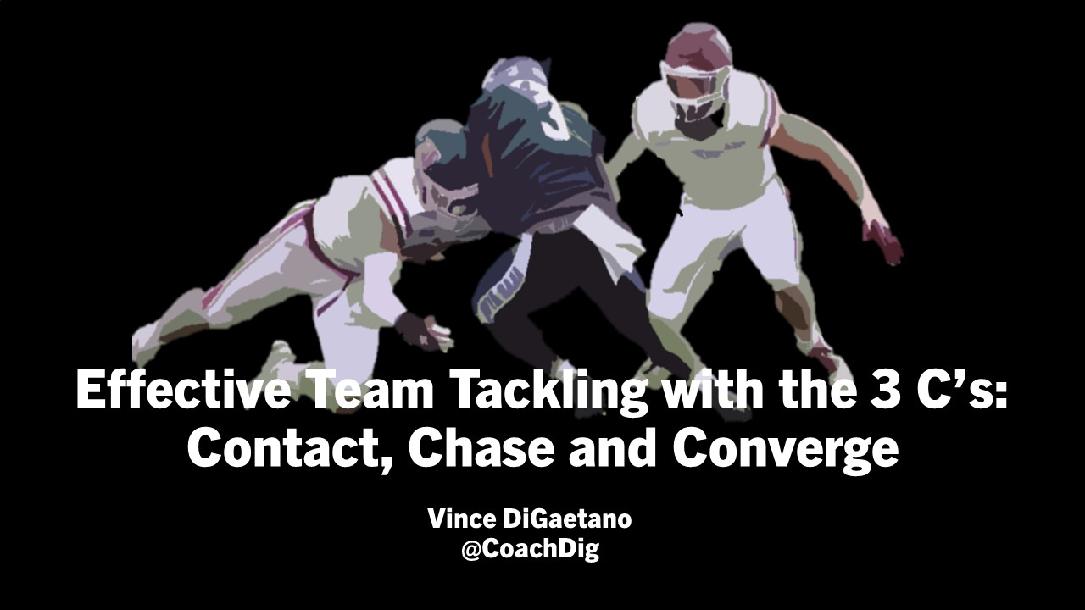 This course take an in depth look on how to utilize tackling to play effective team defense. The course incorporates tackling basics that can be utitilzed to help develop a coaches eyes when making on field and off field corrections. Through the coaches eye we develop the ability to narrow the focus on tackling evaluation and incorporate our assessment into the defensive scheme to measure its effectivness and get more players to the ball. This leads to better leverage for your defense and decrease yardage for the offense you are facing. This course helps to create value for your defense in three main aspects: Contact, Chase and Converge in simple terms that are relatable to your coaching staff and players.

Vince DiGaetano is currently an Assistant coach at Fordham University in New York. .Prior to Fordham, DiGaetano served as head coach at New York Maritime in 2018, leading the Privateers to a 7-4 mark and a berth in the New England Bowl.DiGaetano originally began his time with Fordham in the Summer of 2018 before the last minute need at Martime  A veteran coach, DiGaetano served for two years at Wagner College where he served as a defensive assistant, having previously worked on the defensive side of the ball for several football programs within the New York City metropolitan area.Prior to his stint at Wagner, DiGaetano was the linebackers coach at Nassau Community College in 2015, having previously spent ten years on the staff at SUNY-Maritime. From 2008-2014, the 1999 Wagner College graduate served as defensive coordinator for the Privateers, which followed a three-year stint (2005-07) where he served as special teams coordinator at SUNY-Maritime from 2005-07. Prior to Maritime, DiGaetano spent four seasons as the defensive coordinator at DeWitt Clinton High School in the Bronx. In 2014, Coach DiGaetano was a finalist for the AFCA Assistant Coach of the year in Division III. He also served as Defensive Coordinator of the USA Select Team for the 2015 International Bowl which defeated the IFAF World Team 20-15 at the Dallas Cowboys’ AT&T Stadium.In 2016 he served at Head Coach for the USA National Team-Select earn a victory over Canada in the International Bowl.

A lifelong educator in June 2017, he was a recipient of the 2017 Sloan Public Service Award. Widely regarded as the Nobel Prize of NYC government, this honor is annually bestowed upon six outstanding civil servants whose work performance and commitment to the public transcend not merely the ordinary but the extraordinary.

Coach DiGaetano is an expert on tackling and his twitter videos made me want to see this course. It goes in-depth on the science of tackling and how to train players to tackle in game situations with different angles, leverage, and most importantly, how to work with your teammates in group tackling situations. Most tackling videos will show you good tackling drills for the individual tackler but Coach Dig goes into group tackling and shows you the drills to teach it. The course also shows you how to evaluate your tackling on film and give feedback to your players.

DiG is a master at anything tackling. Worth every penny.

I loved it!!! I thought the video was well thought out and opened my eyes to some of the details of tackling that we as a program were missing!

You just booked "Effective Team Tackling with the 3 C’s: Contact, Chase and Converge "