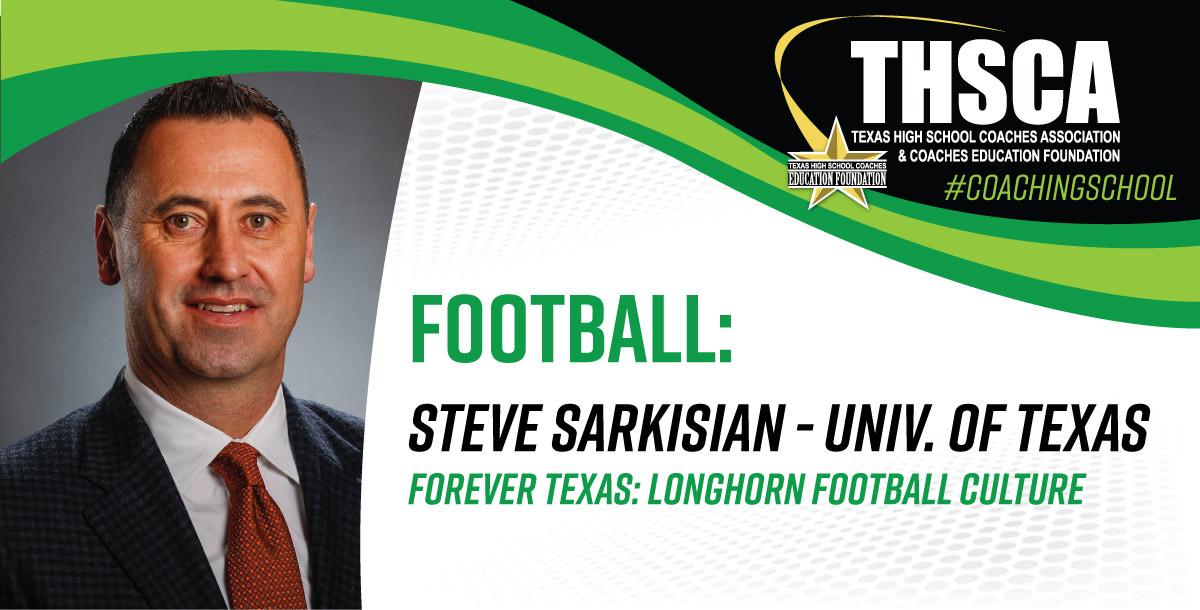 The 2020 Broyles Award winner (best assistant coach in college football) as offensive coordinator at Alabama, and the former head coach at USC and Washington, Steve Sarkisian was named the 31st Head Football Coach at The University of Texas on January 2, 2021.

In the past two seasons as the offensive coordinator and quarterbacks’ coach at Alabama, Sarkisian was the architect of 24 straight games in which the Crimson Tide’s offense scored 35 or more points, the longest streak in major college football history. Despite coming up just short of that in a 31-14 win over Notre Dame in the College Football Playoff semifinals, the victory propelled Alabama to the National Championship Game where they defeated No. 3 Ohio State, 52-24.

Sarkisian not only boasts play-calling experience at the highest levels of football, but seven years as an FBS head coach. He guided the Southern California program in 2014-15, and the Washington Huskies from 2009-13. He posted a head coaching record of 46-35 over those seven seasons while leading his teams to five bowl appearances.

At USC, Sarkisian coached Heisman Trophy-winning quarterbacks in Palmer and Leinart, along with NFL signal-callers Mark Sanchez, John David Booty and Matt Cassel. The Trojans went 23-3 during his tenure as the offensive coordinator.

Prior to his start in coaching as quarterbacks’ coach at El Camino College in 2000, Sarkisian starred at the quarterback position at the prep, collegiate and pro levels. He spent time with the Saskatchewan Roughriders of the Canadian Football League for three seasons (1997-99) following his collegiate career at BYU.

While with the Cougars from 1995-96, He was the WAC Offensive Player of the Year in 1996 and earned second team All-America honors. Sarkisian earned his bachelor’s degree in sociology from BYU in 1997 after getting his associate degree in general studies from El Camino College in 1994.He is married to the former Loreal Smith, who competed and coached in track and field. He has two daughters, Ashley and Taylor, and a son, Brady.

Connecting Your Football Program to the Community by Kyle McElvany
Views: 2385
(1) FREE