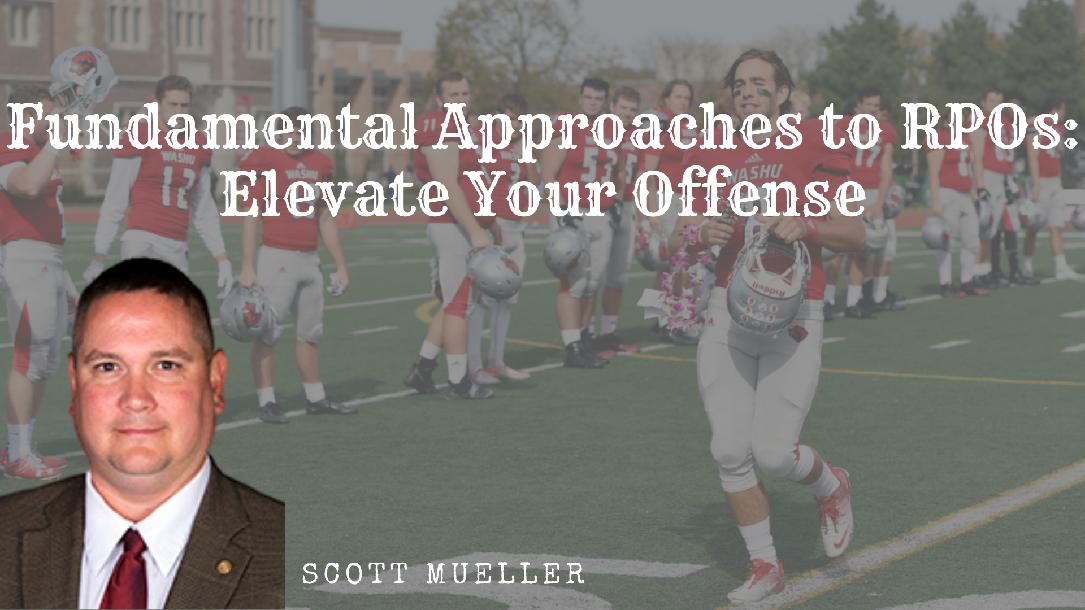 RPOs are used widely across professional and collegiate levels. Although, to have a successful RPO game, you must have Pre snap understanding. Recognizing key alignments the defenders make pre-snap to determine what coverage they're using. Afterward, Recognize post-snap movements to determine whether to throw it or hand it off. These fundamental approaches can elevate your RPO game.

In this course, Coach Scott Mueller discusses his fundamental approach to RPOs. He talks about the 3 point play and the flex right 5. He follows by demonstrating video examples of plays, progression, and adjustments.

Simply click the ‘Book This Course’ button at the top right of this page, place your order, and you’ll immediately be logged into the training with full access. Take a look into Coach Scott Mueller's fundamental approach to RPOs today!

Scott Mueller begins his 15th season as a full-time assistant coach with the Washington University in St. Louis football team and 19th overall with the program. After serving the last 10 seasons as offensive coordinator and coaching the quarterbacks, Muller will oversee the running backs in 2020.

Mueller has been part of six University Athletic Association (UAA) championships and the 2016 Southern Athletic Association (SAA) in 17 years on the sideline with Kindbom, including NCAA Playoff appearances in 2013 and 2016. He has also mentored UAA Offensive Player of the Year award winners Easton Knott (2011) and Eric Daginella (2013) and coached WashU’s all-time leading passer J.J. Tomlin and second-all-time leading passer, Johnny Davidson.

Mueller’s first season as the offensive coordinator in 2010 was a success, helping lead the Bears to a 7-3 overall record and second place in the UAA. In 2013, Mueller and the Bears’ offense helped lead the Bears to finish to an 8-3 overall record. WashU won the UAA Championship for the second-straight season and made an appearance in the NCAA playoffs for the second time in school history.

You just booked "Fundamental Approaches to RPOs: Elevate Your Offense"