Gap Scheme Combos and GT Counter to a 3 Man Surface 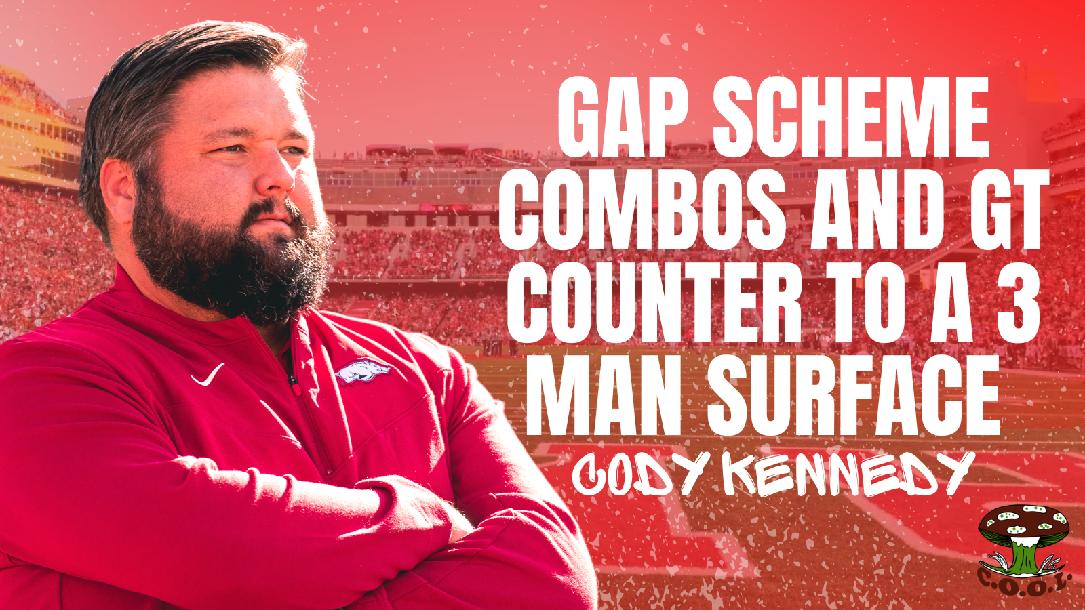 In this course, Coach Cody Kennedy teaches the Gap Scheme Combos along with the GT Counter to a 3 man surface. He begins with foundational goals of run blocking which piece together into the Gap Scheme combos and the full install of GT Counter.

He shares the details of the different steps which build the combos.  Positional, Timing and Attack Steps set the OL up for success.  He teaches how the different combos work in getting 600 pounds on 300 pounds in order to get vertical displacement.

He shows it in action with both practice film and game film.

After watching this course, you will have the details you need to install this scheme into your offense, or the answers you need to make it better.

Cody Kennedy begins his first season as Arkansas’ offensive line coach in 2021 after originally being hired to coach the Razorbacks’ tight ends following a brief stint at Southern Miss during the 2020 offseason as the team’s run game coordinator and offensive line coach.

He joined new Southern Miss head coach Will Hall in Hattiesburg after spending the 2019 and 2020 seasons working with Hall, then Tulane’s offensive coordinator, as the Green Wave’s offensive line coach. Kennedy helped Tulane establish one of the nation’s premier rushing offenses, ranking inside the FBS top 20 in each of his two seasons in New Orleans.

In 2020, Tulane scored 32 touchdowns on the ground, tied for seventh-most in the nation, and ranked 17th nationally averaging 217.1 rushing yards per game, leading the American Athletic Conference in rushing for the second straight year. Kennedy helped guide Tulane to its second bowl berth in as many seasons, mentoring offensive linemen Corey Dublin and Sincere Haynesworth to All-AAC Second Team recognition.

great insight on one of the most popular plays and techinques