Identifying & Attacking Coverages with the RPO 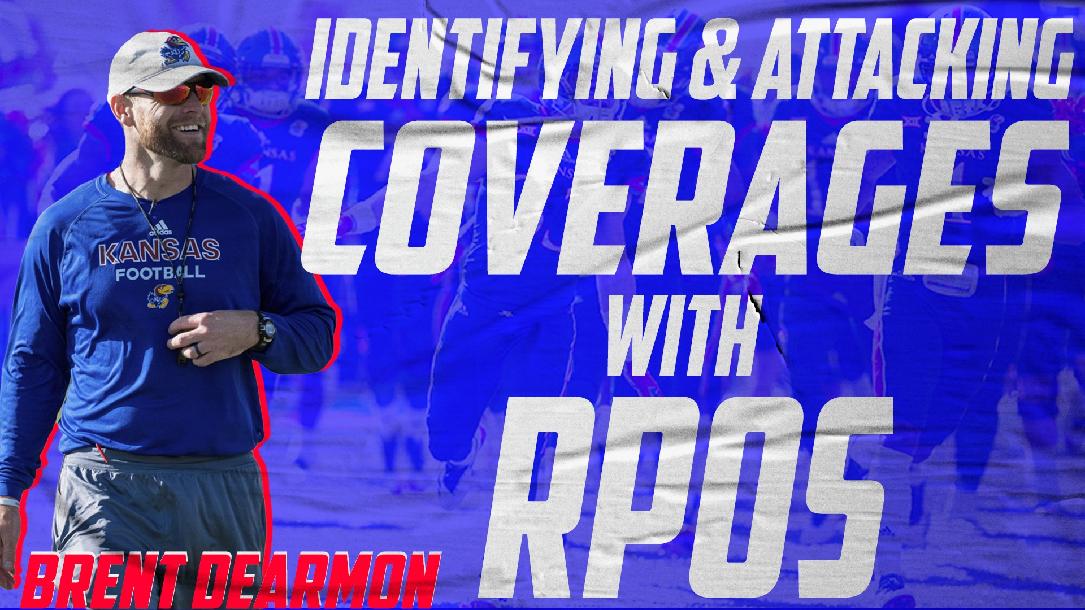 Get an up close look at one of the most electrifying schemes in football today, taught by one of the guys who knows it best, Coach Brent Dearmon at Arkansas Tech!   The Offense That Produced Unbelievable Numbers After working under Gus Malzahn at Auburn, Coach Dearmon engineered the biggest offensive turnaround in college football at Arkansas Tech, and his offenses now average 36.5 points and 458.8 yards per game.

Change Up Your Reads Coach Dearmon walks you through his thought processes when designing plays and explains how he thinks about the different pre-snap and post-snap RPOs.   Stay One Step Ahead of the Defense Coach Dearmon takes an in-depth look at the many different coverages designed to stop the modern spread offense, and shows you exactly what the defense is thinking with each one.   If you're looking to get better on offense, you owe it to your team to get your hands on this incredible resource!   Book this course now!

Brent Dearman is now the new Offensive Coordinator at Kansas.

His third year as the offensive coordinator at Arkansas Tech, after spending the previous two seasons on the staff of Gus Malzahn at Auburn University. In his first year at Arkansas Tech, the Wonder Boys produced the biggest offensive turnaround in college football - including a 360% increase in rushing yards from the previous season. Tech's offense was the second-rated offense in the GAC, racking up 36.5 points and 458.8 yards per game.  Along the way, Chris Eastburn,  Bryan Allen, Jabyes Cross, Trey Martin and Arsenio Favor earned all-conference accolades. Dearmon has had a QB make the all-conference list in each of his two seasons at Arkansas Tech. Dearmon’s offense has been in the top 4 in the league in the last two seasons in rushing offense, turnover margin, redzone offense, and fourth down conversions.

During his time at Auburn, Dearmon spent the 2013 season as a Running Back Analyst and the 2014 season as a Wide Receiver Analyst. While Dearmon was at Auburn, the Tigers posted a combined 20-7 record, including an 11-5 mark in SEC play. The 2013 Tigers captured the SEC title en route to an appearance in the BCS Championship Game in 2013. Dearmon was at Auburn during “The Miracle in Jordan-Hare” hail mary play verses Georgia and the “Kick Six” Field Goal return touchdown verses Alabama. Dearmon brought extensive experience in the high school ranks to Auburn, as he spent three seasons as the offensive coordinator at Vigor High School in Prichard, Alabama before taking the reins of the program at B.C. Rain High School for two seasons. Dearmon won a state championship at Vigor in 2008 as his offense averaged 36 ppg.  He began his coaching career at his alma mater, Bethel University, in 2007, where he served as a student assistant, coaching the defensive backs as the team posted an 11-2 record. Dearmon started for four years at Bethel University, where he re-wrote the school's record book en route to the school's first conference title, first playoff appearance, and first playoff victory. He remains the school's career and single-season record holder in passing yards and touchdowns. Dearmon spent time after college playing in the arena and indoor football leagues as a quarterback. (Evansville Bluecats, Tennessee Valley Vipers, San Angelo Stampede Express)  Dearmon is married to Amanda Dearmon and they have two amazing children, Carter (5) and Isabella (3).

Excellent job of explaining what players should be looking for to identify various pass coverages.

This is one that is worth the price. Very informative, especially the coverages section.

Great setup for instruction on RPO's and basic coverages.

Excellent! Coach Dearman does a great job of explaining his offensives schemes and has great video as well.

Great course. I've watched it at least a half dozen times and I learn something from it each time.

If you want to run RPOs buy this

Great breakdown of coverages and how to attack them by a rising superstar in the coaching world.

You just booked "Identifying & Attacking Coverages with the RPO"