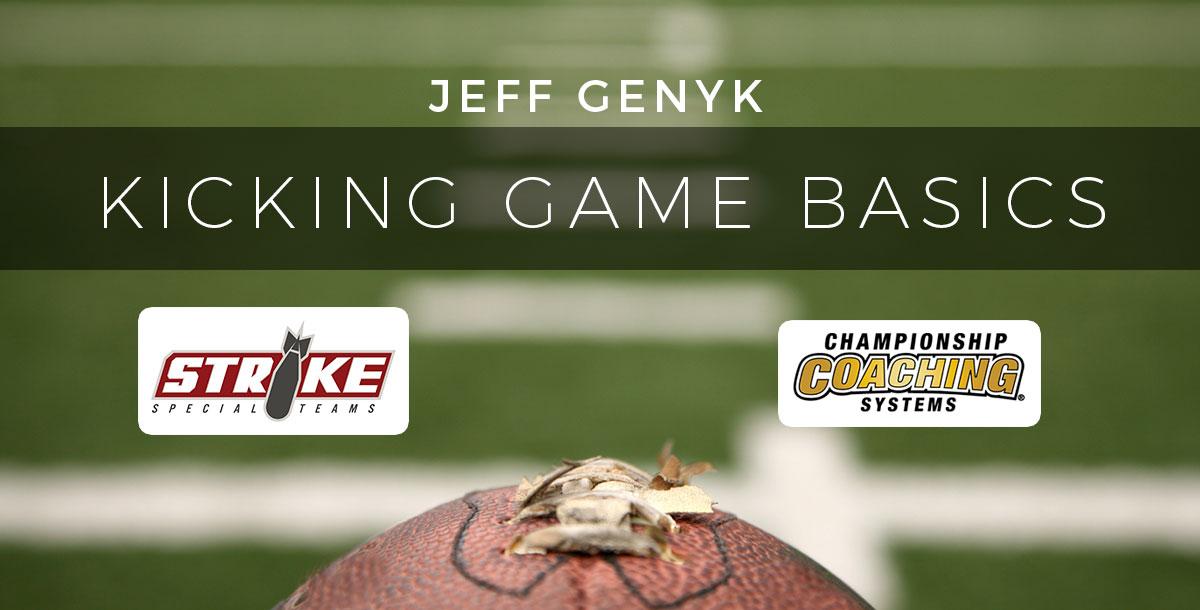 Here it is, a great collection of kicking game strategies to sure up your special teams. In this course, we offer the basics of PAT, kick-off, and shield punt. As a bonus, we are offering a recent clinic presentation by Coach Genyk on football's most important play: the punt. Every coach will get something out of this course, no where in the game are there such dramatic swings in field position and momentum, use those swings to your advantage.

Jeff Genyk, one of the nation’s most respected special teams instructors and a former collegiate head coach, enters his first year on the Commodore staff. Genyk will serve as Vanderbilt’s special teams coordinator and running backs coach.

“I’m very pleased to announce the addition of Jeff Genyk to our Vanderbilt staff,” Mason said. “Jeff is recognized as one of the nation’s leading coordinators of special teams and an outstanding offensive coach. He brings a great deal of knowledge and expertise to our staff. Jeff has enjoyed plenty of success coaching special teams and offense, and I look forward to that continuing here in Nashville.”

In 2015, Genyk rekindled a working relationship with Northwestern University, serving as a consultant to Head Coach Pat Fitzgerald on special teams, offense and game management. The Wildcats matched their highest win total in the last decade, going 10-3 and playing in the Outback Bowl.

In 2013-14, Genyk coordinated special teams and worked with tight ends at the University of Wisconsin. During the two years at Wisconsin, he worked with Vanderbilt offensive coordinator Andy Ludwig under Badger Head Coach Gary Andersen.

Genyk served as the head coach at Eastern Michigan from 2004-08. He coached the Eagles to their best conference finish in seven years in 2004 with a third-place showing in the West Division of the Mid-American Athletic Conference.

While at Eastern Michigan he coached three All-Americans in linebacker Daniel Holtzclaw, defensive end Jason Jones and placekicker Andrew Wellock. Jones was a second-round selection of Tennessee in the 2008 NFL Draft who just completed his eighth professional season. Wellock was a finalist for the 2004 Lou Groza Award given annually to the nation's top placekicker. He also coached offensive tackle T.J. Lang, who was selected by Green Bay in the fourth round of the 2009 NFL Draft and continues as a standout on the Packers’ offensive front.

After his tenure at Eastern Michigan, Genyk spent one season at ESPN, serving as a color analyst for Atlantic Coast Conference games.

From 1994-2003, Genyk worked at Northwestern, with responsibility for the special teams unit during each of his final five campaigns with the Wildcats. He was also the running backs coach and recruiting coordinator for five seasons (1999-2003) after having worked with the safeties in 1998 and the outside linebackers in 1997. During his first five campaigns, he was the school's Director of Football Operations from 1994-96 and a defensive graduate assistant from 1992-93.

Genyk was on the Northwestern football staff for three Big Ten championship teams and four bowl appearances. The 1995, 1996 and 2000 teams all won Big Ten titles. The 1995 squad played in the Rose Bowl, the 1996 team was in the CompUSA Florida Citrus Bowl and the 2000 club played in the Alamo Bowl. The 2003 squad participated in the Motor City Bowl.

At Northwestern, Genyk mentored Fitzgerald as an All-America linebacker and defensive player of the year. He coached several other standouts at Northwestern, including linebacker and eventual first-round NFL pick Napoleon Harris and running back and Heisman Trophy finalist Damien Anderson.

A native of Milan, Mich., Genyk was a quarterback and punter at Bowling Green State (Ohio) University from 1978-81. He earned a Bachelor of Arts in Business Administration from Bowling Green in 1982. He later earned a Master’s of Business Administration and Marketing from Western Michigan University in 1989 and a Master’s of Education and Social Policy from Northwestern in 1994.