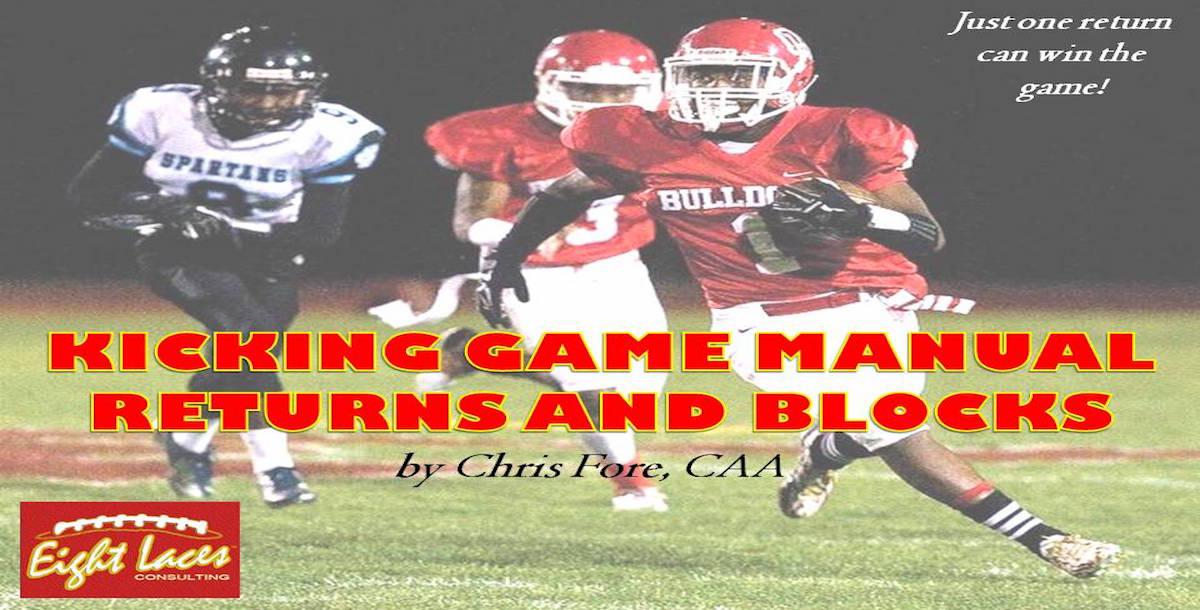 “This is really good stuff. I definitely think that coaches would be interested in having this.  Just don’t sell it to any of my competitors!” – T. Williams, Football Coach

What if I told you that a $14 investment would win YOUR TEAM  a football game next season?!

Would it be worth the small investment?

Let me share a story from the 2014 season where one of these returns helped us win a game!

We were playing the #1 team in San Bernardino County, San Gorgonio High School.  (We weren’t even in the top 10 at the time.)  We upset them.

How did we take the lead and never look back?

We had them on their 30 yard line, with 7 minutes left, a tied score.

I knew this play could turn the ball game around, and I wanted to block their punt, so at first I called for a PUNT BLOCK.

But I changed that to a punt return as I saw the punt team lining up.  And here is what happened (excerpt from local newspaper):

"The Bulldogs and Spartans were tied at 10 with just over 7 minutes to play when San Gorgonio was forced to punt at its own 30.
Knight caught the punt and returned it 75 yards UNTOUCHED to give Oak Hills a 16-10 lead.
As soon as I saw the opening to go right, I cut back right and followed my team and the blocks,” Knight said. “The blocks were wonderful. I credit my team all the way for that.”

Here is the punt return we put in that very week!  It was a return right up the middle of the field.  And you will see on the video, that’s what we did!  A man assignment return.  It worked!

Our Punt Return team had the highest punt return average in the state of California in 2014!

Without a doubt, we had a very talented returner.  But we also created man return schemes each week to take advantage of what the opponent was giving us.

When I took over as the Special Teams Coach at Oak Hills in May of 2014, I tried hard to find some great punt returns online.  I had never coached Punt Return, my Defensive Coordinators always did.  I couldn’t find any!

So, I’ve put together this KICKING GAME RETURNS AND BLOCKS MANUAL!

It features more than 60 pages with 10 Kick Returns, and 20 Punt Returns/Blocks.

WHAT COACHES ARE SAYING ABOUT THIS MANUAL

“We have always ran the same old vanilla zone returns and this manual will help change things up a little and also give me some ideas since this is my first year.” – J. Graham

“I think there are many coaches that would be interested in a manual like this. Especially new head coaches or new special teams coordinators at a high school. It also could be valuable as a supplemental tool for experienced coaches.” L. Miller, Athletic Director and Football Coach

“Your idea is great.  It seems that you’re intending something specific and to the point.  There has been helpful information on philosophy and organization of special teams, but always thin on strategy, tactics, and examples and nothing outside the box.”  T. Bomar, Football Coach

“I think coaches would definitely be really interested in something like this, especially if you provide some highlights of do’s and don’ts on a powerpoint.”  – A. Ibarra, Football Coach

Chris Fore is a veteran Athletic Director, Football Coach and Teacher from Southern California.  Currently, he teaches Special Education at Sultana High School, and is the Special Teams Coordinator at Victor Valley College.  Fore also serves as an Adjunct Professor in the Department of Kinesiology program at Azusa Pacific University where he teaches Leadership and Administration of Athletic Programs in the graduate program.

Fore currently serves as the Special Teams Coordinator at Victor Valley College.  He has coached high school football for sixteen years (eight as a Head Varsity Coach), and has been an Athletic Director for six.  His education includes: a Master’s degree in Coaching and Athletic Administration, Education Specialist Credential (CA), and a Bachelor’s degree in Religious Studies.  His Administrative Services Credential (CA) will be finished in December, 2018; he will also finish two classes to earn his Masters in Educational Leadership.