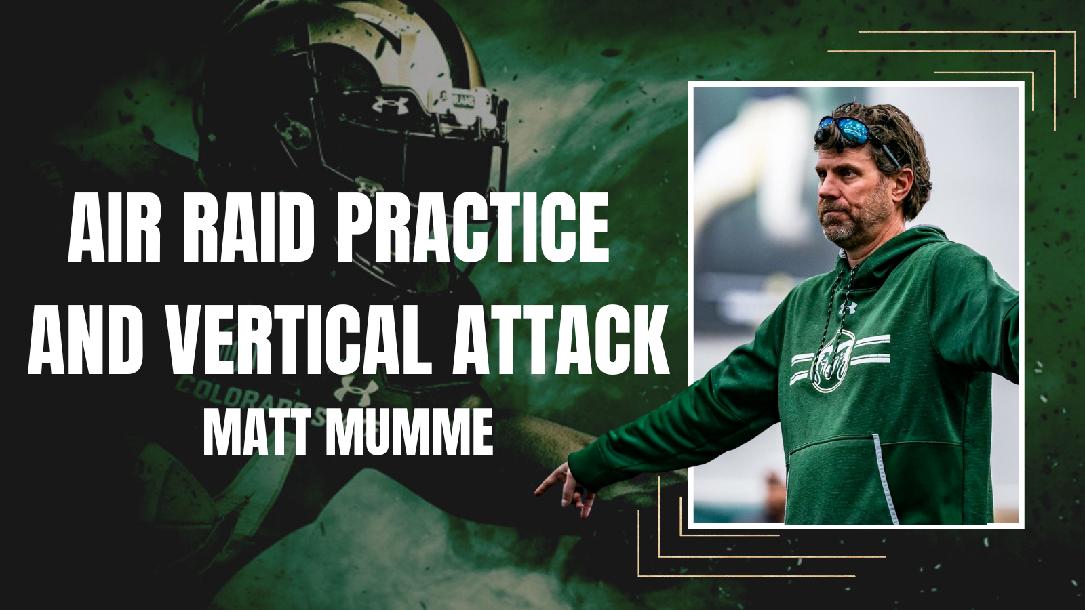 In this course, Coach Matt Humme teaches the Ari Raid and vertical attack during practice. He demonstrates his insight into how they practice and plan the Air Raid effectively, getting the most reps possible. He reveals their vertical passing concepts as well as how to read certain coverages. Coach Humme covers a variety of drills, routes, and more. Everything you need to know about the Air Raid and vertical attack is right here.

Simply click the ‘Book This Course’ button at the top right of this page, place your order, and you’ll immediately be logged into the training with full access. Learn how Coach Matt Humme teaches the Air Raid and vertical attack today!

Matt Mumme, A disciple of the noted “Air Raid” offense, enters his first season as the Colorado State quarterbacks coach in 2022. He previously served for five seasons at Nevada as OC/QB Coach. The 2020 campaign marked a high point for the Pack offense as well as its quarterback play, putting together one fo the top seasons of any single caller in the nation. Carson Strong became the first Nevada player to be named Mountain West Offensive Player of the Year and was named to the All-American West First Team.

Mumme adopted the Air Raid scheme right away with Nevada to much success. The Wolf Pack passing attack ranked 12th in the nation, while the Nevada offense was also a top 50 figure in the FBS. In Mumme’s second season as the offensive play caller, the Wolf Pack increased its production in many statistical categories including passing offense, scoring offense, total offense and red zone offense. Nevada ranked in the top five in the Mountain West, a top 25 team nationally in passing offense.

Matt Mumme breaks down a basic Air Raid practice and explains how to get the most reps possible. Great examples of Nevada 6 concept, as well. Mumme explains how they read Safeties in the vertical passing games.

A great deal like watching one of his Dad's lectures. The emphasis on practice routine is very familiar. I picked up a couple of things off of the vertical concept so the course was worthwhile.

This was a great look at Nevada's AR concepts and into the thought process of coach Matt Mumme.