Offensive Innovators: Breaking Down the Tom Herman Offense and RPO’s 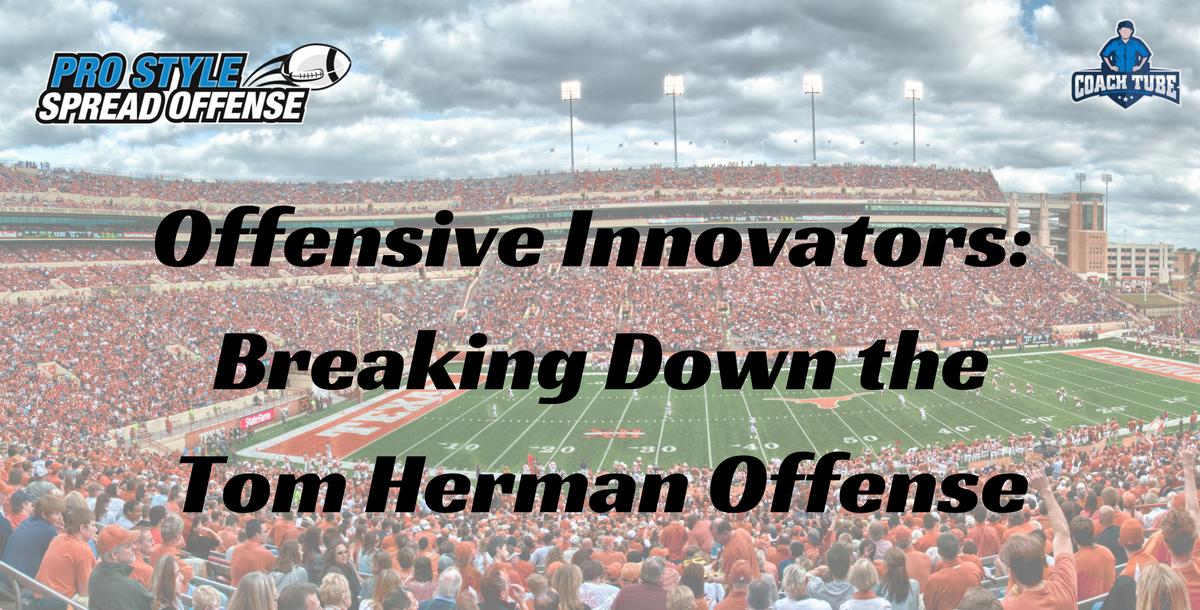 Get a step by step breakdown of Tom Herman's Offense! DOWNLOAD FREE SAMPLE HERE Also Join our Free Facebook Group "Pro Style Spread Offense Insiders Only" to get access to Live Video and Group Discussions where you can get your questions answered! Request Access Here: https://www.facebook.com/groups/560227550797321/ How do you get the most innovative new plays in your playbook? Every football season there are coaches that really stand out. They stand out because they have the vision to create new and amazing things from their offenses each year. These are the coaches you can learn from to help you find the winning edge for your team! Introducing Offensive Innovators: Breaking Down the Tom Herman Offense My name is Jason Hahnstadt, I’m the founder of ProStyleSpreadOffense.com Over the past two months I’ve released multiple courses where I’ve broken down today’s top offensive systems and the system we used successfully. In this short time over 300 coaches have booked these courses to learn more about the latest in football strategies. This project draws from the best offensive innovators in the college game today. And I want to share with you every single strategy that I have uncovered from this season’s top coaches. Here's what you get:

- 20 of Tom Herman's top offensive plays each broken down and described in a 2-4 minute video whiteboard lesson. - How to adjust each concept to different defensive looks. Even and Odd front variations covered for run game. Pass game includes 2-high Safety and 1-high Safety adjustments. - Techniques and offensive position skill development recommendations at key positions for each play. - Individual 10-15s clips of each play in HD quality slow motion. - Practice drill suggestions - Breakdown of play installation and rationale for running each play. - Full Playbook for downloading and printing of every single play to share with staff and easy reference. Do the Plays Work for Normal Offenses? My whole purpose for doing this is to show you that many of these play can be executed in normal offenses. When you dig into these offenses you will see that they are not as complex as some might think. Many coaches have a limiting belief but I want to show you that you can be an innovative offensive coach with your team and win more games because of it! Reviews of my other current courses (I cannot access these reviews from my previous CoachTube courses) “I'm a youth coach always wanting to learn a little more. At our level, it's great when you can access videos that break things down for you. I can seek out those plays and concepts I can modify down to our level. Coach Hahnstadt's course on JMU's offense gives me a lot to work with this off-season. Coach has done a great job isolating what makes the plays work. There are definitely several concepts I'll be able to bring to this season with my 11 and 12 year olds. Thanks Coach Hahnstadt!” “Very well done. Breaks down these plays and responsibilities in a way that is very simple to understand. Nice job.” “Very helpful... I'm just moving up from youth to high school...And I'm studying different RPO systems... So this is real good material to use and coach up.” “Great course. Very comprehensive and detailed with varied backgrounds/scenery and explanations. Good for the easily distracted haha. He even discusses how to install it step-by-step with your team. Lots of videos and materials in the course.” Frequently Asked Questions: Will this course continue to be updated? At any point I learn or gain some new information regarding the strategies these teams are using I will update the course - all coaches will receive these updates. Why did you choose Tom Herman's offense and not other FBS, FCS, Div 2,3 and High School's to break down? In the case of this course, I choose Coach Herman's offense since he is one of the most innovative coaches in the game today. In the future, I would love to cover more teams from different levels - one of my previous courses was on JMU who was this season’s National Champion at the FCS level and they did some outstanding things. How are each of these concepts created? Each coach has their own method for creating and calling plays. I can best speculate that it’s a combination of all their previous experience as well as what they have been able to test in practices and develop with their own staff. What terminology should be used for calling these plays? Each play is listed with a sample of a recommended terminology for installing the play. Coaches should be able to adapt to their own systems easily if they wish to. I tend to use a lot of words to help describe the play in the course, but prepping for a game you would probably want to cut down terminology as much as you can. How do I install these plays in practice? Under the practice drill section for each play, I will cover some of the ways to install these plays so that your offense can be executed like the teams you are modeling it after.  Will OL blocking schemes be broken down? Yes, within each video breakdown, the offensive line scheme will be covered. For example if it is a zone run, I may discuss uncovered/covered rules or numbering system as to how the team determines who they are supposed to block. How simple is it to install/adapt to my current offensive scheme? As I break down each play I will discuss the concepts of the play and why it works. How each team runs it (formations/personnel) is the icing on the cake, but the concepts can be adapted to any offensive system.

Jason has been studying the game of football since he first became a coach at the collegiate level in 1999. His passion led him into a variety of coaching positions where he enjoyed learning new systems from a wide variety of coaches at multiple levels. Jason is as passionate about coaches education as he is about coaching the game of football. Check out Jason's appearances on the Winning Youth Coaching podcast as well as The Sports Parenting Podcast. He was also the first coach to pioneer taking the flipped classroom into physical education and coaching under the influence of John Bergman, the pioneer of the Flipped Classroom Movement. As an author, Jason has been published in John's book titled "Flipped Learning: Gateway to Student Engagement". Currently, Jason teaches Physical Education in Chicago's North Suburbs and is also the founder of The Pro Style Spread Offense Football System.   Football Coaching Experience: Special Team Coordinator, 2012 – 2013, New Trier High School, Winnetka, Illinois Offensive Coordinator, 2009 – 2011, North Shore Country Day School, Winnetka, Illinois Defensive Coordinator, 2007 –  2009, North Shore Country Day School, Winnetka, Illinois Offensive and Defensive Line, 2005, Muncie South Side High School, Muncie, Indiana Assistant Football Coach, Wide Receivers, 2000 to 2005, Taylor University Football, Upland, Indiana (Under Head Coach Steve Wilt) Assistant Football Coach, Wide Receivers, 1999 to 2000, Trinity International University, Deerfield, Illinois (Under Head Coach Andy Lambert)

Well put together course. The lessons include play breakdown and video clips. Also some extra drills and PDF's that any coach can use.

Great breakdown of Coach Herman's offense. I'm a huge fan of this style of offense and this breakdown is BIG TIME!!!

Excellent course on spread football. Great format with video clips and diagrams with explanations! Lots to take away for your own offense.

You just booked "Offensive Innovators: Breaking Down the Tom Herman Offense and RPO’s"