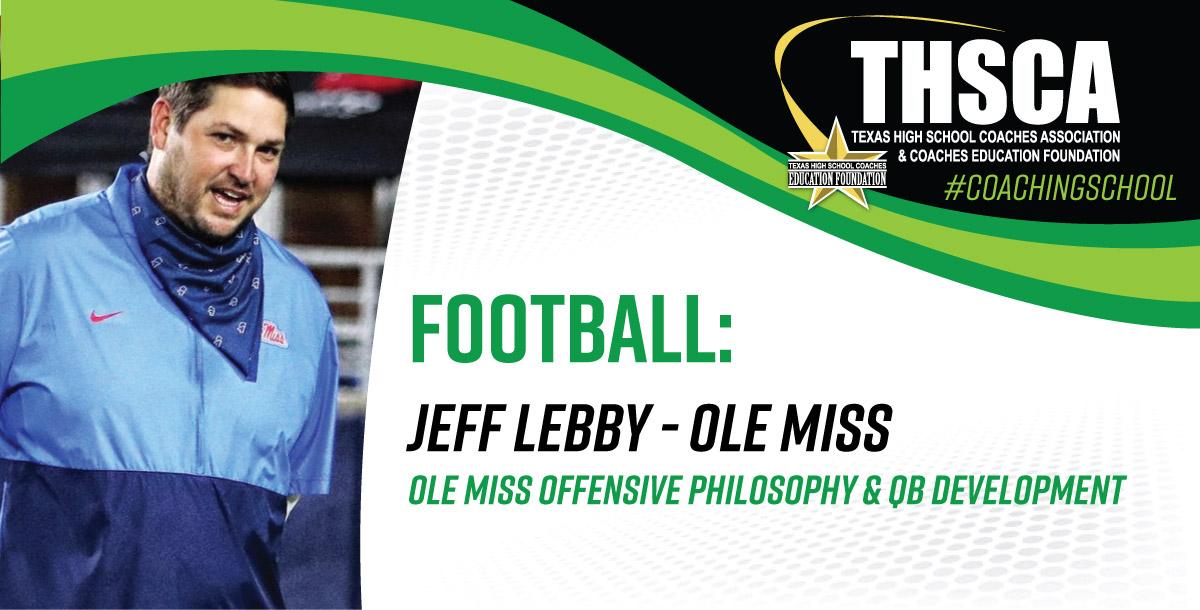 Jeff Lebby was announced as Ole Miss’ offensive coordinator on Dec. 12, 2019 after spending his prior two seasons at UCF.

Lebby joined the Knights in December 2017 as quarterbacks coach before being promoted to offensive coordinator prior to the start of the 2019 season.

Lebby found immediate success in his first season in 2018, helping lead the Knights to their second straight undefeated regular season, another American Athletic Conference Championship, a berth in the 2019 Fiesta Bowl and a national ranking as high as seventh.

He tutored McKenzie Milton, who threw for 2,662 yards and 25 touchdowns on his way to his second American Athletic Conference Offensive Player of the Year honor. Milton finished sixth in the Heisman Trophy voting.

Lebby came to Orlando (2017) after one season as offensive coordinator at Southeastern University in Lakeland, Florida. He helped lead Southeastern to a 5-0 conference mark and a berth in the NAIA playoffs. Southeastern had the No. 1 scoring offense and the No. 3 total offense in the NAIA in 2017.

Prior to joining the Southeastern staff, Lebby served in various capacities on the football staff at Baylor. He was the passing game coordinator and offensive recruiting coordinator for two years. He coached the running backs for five years. Prior to those roles, Lebby was the assistant director of football operations in charge of offensive quality control, while also serving as the team's liaison to the NFL.

Prior to his tenure at Baylor, Lebby served as the offensive line/tight ends coach at Victoria Memorial (Texas) High School. Lebby played high school football for his father Mike Lebby at Andrews (Texas) High and earned all-state honors as a senior. He signed with Oklahoma, but an injury ended his playing career. He then spent four years with the Sooners as a student assistant coach.
Lebby earned a bachelor’s degree from Oklahoma in 2007. He is married to the former Staley Briles. The couple has a daughter, Kora, and one son, Kane

Coach Lebby has great insight on the development on QBs! I'm excited to implement some of his ideas.

Coach Lebby has great insight on the development on QBs! I'm excited to implement some of his ideas.

Everything You Need To Know About Being A Quarterback or Quarterback Coach by Go NoHuddle
Views: 2961
$33.33