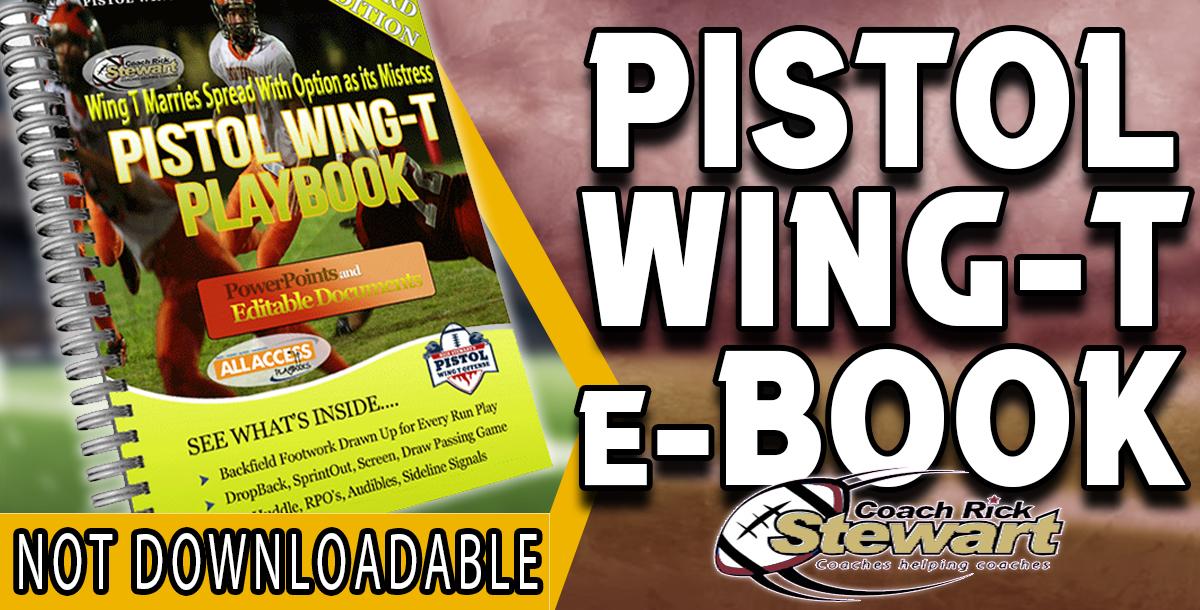 You own it for life, including all future updates.  When Stewart makes a change, you will see it next time you log on.

Since the original videos were published in 2010, over a thousand copies have been sold.  12 teams have won state titles running this exciting offense.

DISCLAIMER:  This is NOT a downloadable product.  I used to offer that and the book showed up as a Facebook download and on Scribd.  It took me over 300 hours to write this book and 8 years running the offense so I do not want this to be a free download on the internet.  You will get a dropbox link with tons of drawings & powerpoints when you purchase.  I

In addition to running the offense, I have corresponded with hundreds of coaches running the offense and have installed the offense at over 50 schools in 15 different states.  This 3rd Edition Playbook contains many updates and wrinkles to this exciting offense contributed by this vast pool of coaching knowledge.

--> Read UNBLOCKED defenders on every play.  The QB can turn every run play into Option

--> Every play has step by step drawings of the backfield footwork

--> Go back under center on any play in case of bad weather or your backup center is in the game.

Forty pages explaining easy to learn terminology, No-Huddle, and how to install the offense.  This is a fast offense using 7 different tempos with a hybrid HUDDLE - NO HUDDLE system.

These tempos range from calling the play in the HUDDLE and sprinting to line, running the play in 3 seconds; or waiting to call the play after the defense lines up; or letting the QB “check with me” based on defensive alignment; or running MUSTANG / NASCAR tempo, snapping the ball 1 second after ball is in play.

Several different NO HUDDLE systems are discussed, allowing you to choose the one that is best for your program.  Wristbands, hand signals, and sideline cards are all explained in this section.

Every traditional Wing-T family is covered in this section: Buck); Belly; and Down.  There is also Midline and Veer.  The Jet & Rocket section shows how to run the entire offense using the flat Jet motion.  There are two short yardage packages, a special “check with me” package, and trick plays.  The combination plays combine a run play with a perimeter pass play and the QB decides where the ball goes as both plays are being ran.

Detailed diagrams show the backfield steps on every play.

While I believe that the Wing-T offense is the best high school offense, I also agree with the criticism that it can lack a passing game.  But it is the not the Wing-T system that lacks a passing attack, it is the coaches that are refusing or not understanding how to pass.

This Third edition has a completely expanded Pass Section that will show you how to simply attack each coverage in terminology that matches the Wing-T run game using the same concepts used by spread & air-raid systems.

¨      PASS ROUTE concepts in a simple language so a few concepts combined with a few formations gives the defense a lot to worry about;

¨      Three SCREEN concepts that can go to any of your 5 players out of 12 formations;

¨      QUICK passing game that gives your athletes the ball in space;

¨      SPRINT OUT off Jet motion putting edge defenders in conflict with the QB run threat.

Every pass route is diagrammed versus Cover 1, 2, 3, 4 and man coverages.  Stewart shows which concepts are better against each defense.

¨   Detailed explanations of what to look for when watching opponent’s film.

¨   Flow charts of “If-Then” statements using plays that are most effective vs defenses.

¨   How to call the plays on Friday night so that the defense is in conflict.

I absolutely can not stop looking at this!! There is so much information contained in this playbook. This playbook is well written and gives you answers to just about anything you may face from a defense during the course of a game. I highly recommend this play book to any and all coaches who run or are interested in running the wing t!

Very Good, giving adjustments to ways the D will try and take it away as well. Could use Video to support it.

This is a great resource with plenty of detail. What I find the most helpful is the consideration for the "if then" philosophy - plenty of explanation on what to do if you see certain defenses/have certain issues, etc. Each series of plays are explained in detail with blocking against 3-4, 4-3, 4-4/4-2-5, and 3-3 stack fronts. The other chapters that cover topics other than the actual play families are very good. The previous review citing fuzzy images is no longer valid; images are now very clear and can be read. Some text is small; simply zoom in to read it. Highly recommended! Also, customer service is outstanding. I had e-mailed Rick previously about the images and he got back to me immediately and corrected the issue. I will be looking at Coach Stewart's site first when looking to expand my library from this point forward.

Excellent resource. The attacking defences "if-then" section particularly useful. Just got to work out how and where to scale it back for use in a youth situation.

I think this course was very well put together. Was very thorough in explaining how to run this system. I couldn't have been more prepared to install this offense.

Loved this playbook! Coach Stewart gives you insight on each scenario that could play out. He gives you an inside look in the if and then situations. He also explains to you every detail and reason why his play calling and formations are called what they are. I actually purchased the online playbook and a hard copy of his playbook to utilize. Hoping to get some of his stuff implemented and be able to make the playoffs in 2020. Something that hasn't been done at my school since 2012.

No clue how the one review said pictures were fuzzy. The book was very easy to read and every page is in color. In fact the problem is there is probably to much information. When I emailed Coach Stewart he sent me a dropbox link with all kinds of drawings and powerpoints to support the book

The if-then statements were worth the price. And the chapter on everything to think about going no-huddle. And when you email Stewart, he responds immediately

So much detail. All the pages in color. And email from Stewart. Buying this book is a no brainer.

Excellent book. One of the best I own. And Stewart answers all your questions on the phone and thru email...he even sent us TONS of handouts.

After reading this book I can see why so many schools have switched to it. The book has so much detail, it is almost information overload. Not sure about the review of fuzzy pages...all the pages are in color and very easy to read. Stewart is very helpful via email.

Love the depth each play that he gave so I can teach my coaches.

Awesome course everything is well explain !!

This is a great fusion of wing-t and the pistol passing offense! Easy to learn and teach.

Informative and well worth the money.

Would’ve appreciated being able to download or print. Should’ve gotten the print copy. Pretty good material nonetheless. Very thorough. I think the series are organized better than traditional Wing T. Play calling is much like what I’m used to.

I love the step by step break downs on each play.