Play Action Passing in the Wing-t 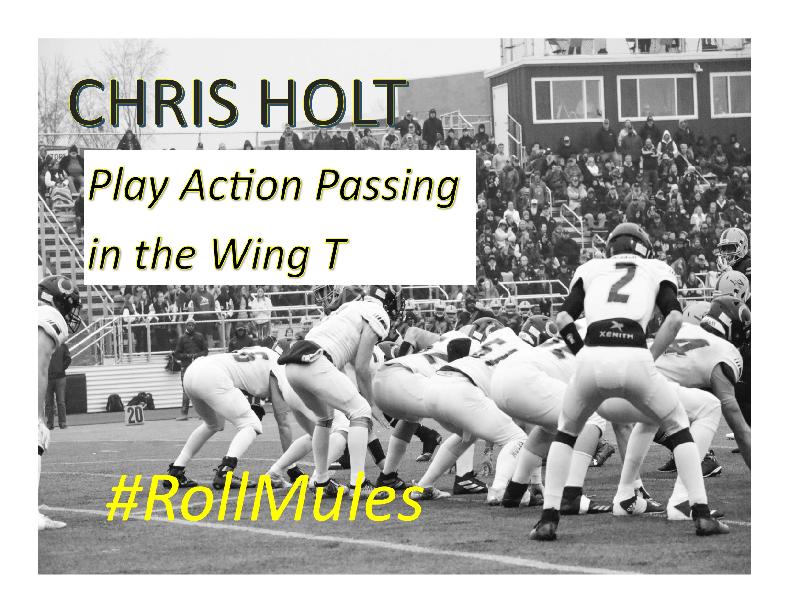 In this video, Coach Holt will discuss his Play Aciton passing game in his Wing-T offense.  In this video, Coach Holt discusses several versions of the Waggle, Keep Pass, Jet Pass, a RPO that looks like Bucksweep but turns into a form of the Waggle and finally a RPO off a QB Counter.  He will go through all the blocking rules for each play and show many cut ups.  Also, you will receive a downloaded power point of the entire presentation.

Coach Holt is the Head Football Coach at Lathrop High School in Missouri. Coach became the head coach at Lathrop in 2015. In the past five seasons, Lathrop has an overall record of 47 -14. In 2018 the Mules finished as the State Runner up at 14-1 and this past season they lost in the semi-finals with a 13-1 record. The Mules Wing -T and Single Wing Offense has averaged nearly 50 points per game the past two seasons.

What initially drew me to look into Coach Holt's presentations was his outside the box so-to-speak thinking. Joining both the Single-Wing and the Wing-T offenses along with creative passing I can see where defenses would be kept guessing. Coach’s presentations are clear, concise, and well communicated. Demonstrated by the manor that his players execute each play it is clear that the play-calling system, formations, and tags are all designed to keep defenses guessing, yet not so overly complicated as to create confusion. What I see here is not a zillion plays thrown on a board. Instead it’s a few plays, a few formations masterfully assembled. Each of the plays is first diagramed showing the individual rules, blocking assignments and any specific tags. Next, using both end-zone and wide-angle film shots Coach Holt shows each of the diagramed plays from multiple games against different fronts and coverages. The nice thing about the way Coach Holt presents each play is I would not hesitate to include the presentation in with my install. This way players could see what the play looks like in a game atmosphere and how its supposed to be properly executed.

You just booked "Play Action Passing in the Wing-t"