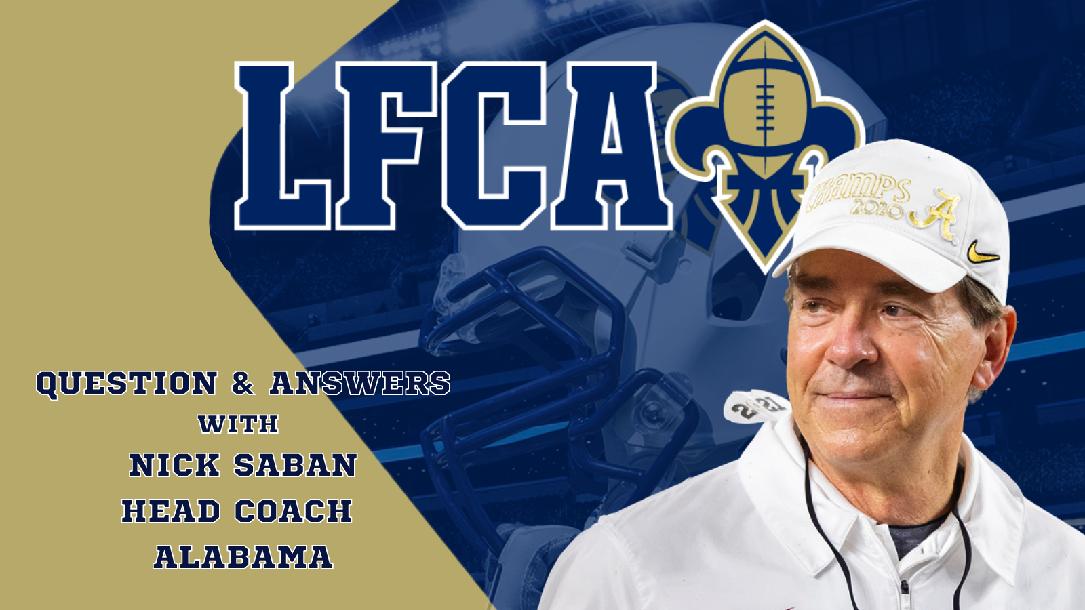 Have you ever wanted to get inside the head of the goat of college football? Well, we did it for you! This course is filled with questions answered by the legendary Coach Nick Saban. He offers his advice on:

This course is a must if you want to learn first hand by one of the best!

Philosophies
1 Philosophy on wanting AND players and not BUT players? 3:21 2 Can you elaborate on discipline is changing behavior not punishment? 5:54 3 How to maintain a winning culture with team activities and expectations? 6:28 4 Do you think more offenses are bringing more tight ends to combat the 3 man front? 2:54
Defense
5 Most important thing to learn for Defense? 3:42 6 How do you package your defensive play calls to easily react to no huddle? 3:19 7 How has the rise of RPO Offense changed how you teach and install Defense? 3:52 8 What were some of the best things Coach Sark brought through the play calling perspective? 2:36
Coach Development
9 How do you get former Head Coaches to buy into being assistants at Alabama? 1:34 10 What building blocks to prioritize when taking over a program? 2:20 11 What do coaches need in making the jump from High School to College? 4:19 12 How did you handle the biggest challenge in your coaching career? 4:02 13 Do you use analytics/tools, or are your decisions for gut feelings? 3:55

Saban has compiled a 223-62-1 (.781) record (218-62-1 after vacations) as a college head coach and has gone 125-14 in the past 10 seasons in Tuscaloosa, which includes a 71-9 mark in regular-season conference play. In 2017, Alabama has been ranked No. 1 in the Associated Press poll for at least one week for 10 straight years, which broke the all-time record of seven established by Miami

Course was awesome overall, I enjoyed it being split up into questions; however, I wish it would have been on continuously looped. Also, section 6 does not have audio and seems to be an error on the side of the production.

Connecting Your Football Program to the Community by Kyle McElvany
Views: 1933
(1) FREE