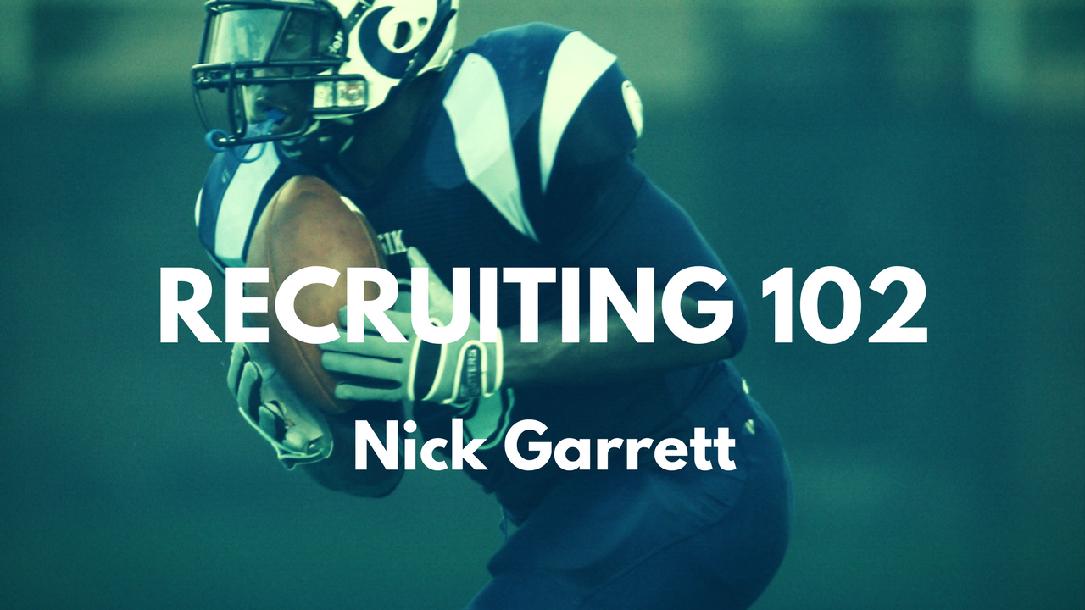 Nick Garrett has been on both sides of the recruiting process, first as a college coach, now as a high school head coach.

Now he wants to share what he's learned with you.

In this course, you'll learn all about what college coaches expect of players, how they evaluate their prospects, and the best ways to stand out from the crowd.

This will be the best investment you can make in the recruiting process.

Prior to Santa Clara high school, coach Garrett has had notable experience at the high school and college levels. Most recently, he was at Bethel, KS as the Associate Head Coach/Offensive Coordinator Recruiting Coordinator NAIA. Garrett has also coached and worked as the Passing Game Coordinator and QB’s coach at Western New Mexico NCAA D2, were he coached and developed 3 All-Conference honored players most notably Ronnel Pompey currently with Arena 1 (Arizona Rattlers). Garrett was a member of the Pacific and Mountain Conferences at East Los Angeles Junior College for four seasons (2009-12). During his time with the Huskies, Garrett guided the team's offense to state and national rankings. Coach Garrett recruited and developed 15 1st Team All-Americans including but not limited to 2X 1st Team Unanimous All-State/All-American QB and Top Passer in the Nation 2012 Aaron Cantu. #1 Wide Receiver in the country Anthony Denham (UTAH) 2014 NFL Draftee Houston Texans and Jeremy Harris CB (New Mexico State) Jacksonville Jaguars. He joined the Hueneme High school coaching staff as the AHC/OC/DC 2007. Within this one year Garrett helped turn a prior season of (1-9) to a quick change to (6-4). While Garrett was with the Vikings he mentored and developed 1st Team All-State FS Trevaun Nixon who he continued to mentor and direct over to UTEP were he was 1st Team All-Conference as a CB, and was previously with the Arena 1 (Tampa Bay Storm). Prior to his appointment at Hueneme, Garrett was an assistant coach in charge of the Passing Game, Quarterbacks and Wide-Receivers/Video Coordinating/ Speed Training at Kansas Wesleyan University for two years (2005-07). During two years at KWU, he coached a trio of KCAC 1st Team All-Conference players QB's Junior Alexis, QB Justin Schropp and Wide Receiver 2X Unanimous Marcus Lowe.

Coach Garrett also has experience as a mentor and youth developmental instructor with organizations such as YAC Foundation/Speed Right Foundation/North Star Sports/Boys and Girls Club of America/East La Bobcat Association and the local YMCA’s.

Coach Garrett is not a stranger to Oxnard or Ventura County since he was raised in Oxnard with his family who are still in the area. As a player, Garrett was varsity letter winner at Ventura College as a Wide Receiver and also played one year as a varsity letter recipient at Graceland University, IA.

Nick Garrett has a daughter by the name Jayleen Alexandra Garrett, and a brother Brendan Garrett who is the Head Asst. Basketball Coach at Cal-Lutheran University in Thousand Oaks, CA. Also coach Garrett has a fiancé by the name of Kassie Lynn Scott who is a college basketball coach at Bethel College, Kansas

Great resource for my student athletes recruiting as a parent, this gives all the ins and outs to what we needed with the process