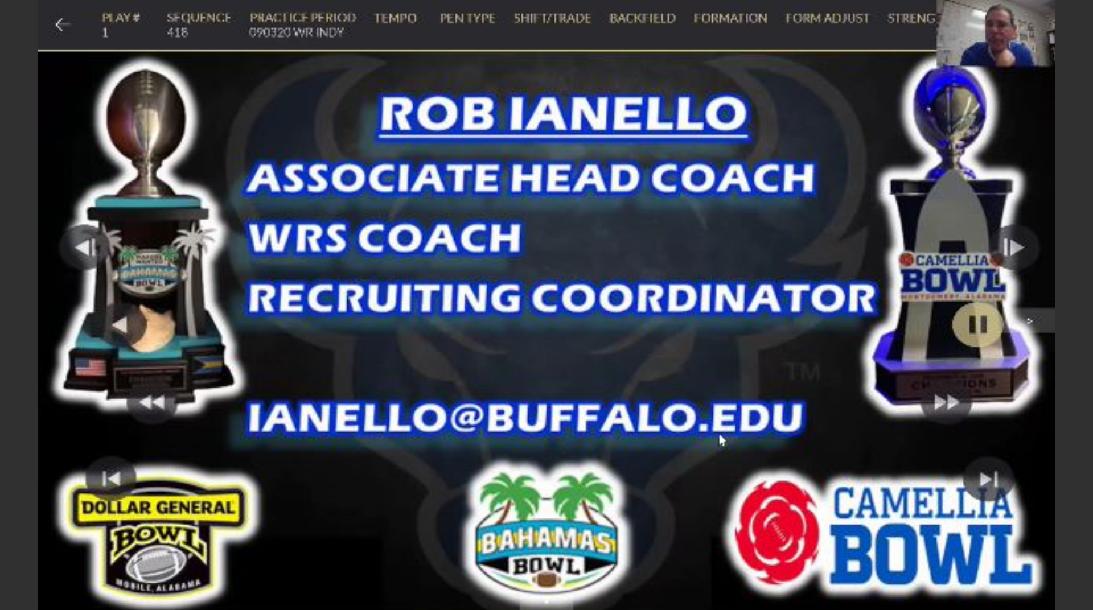 Rob Ianello shares his WR Practice Fundamentals in this course.  He covers every aspect of playing the receiver position from stance and start to releases, footwork, and blocking.  This is his teach tape that he uses with his receivers transformed into a course.

Rob Ianello is in his sixth season as associate head coach, recruiting coordinator and wide receivers coach. In a run-heavy offense, the Bulls still produced an All-MAC wide receiver in 2019. Antonio Nunn had a breakout season, with a career-high 49 receptions, for 687 yards and six touchdowns en route to earning third-team All-MAC honors. For just the second time in program history, Buffalo had two wide receivers named to the All-Mid-American Conference team in the same season as Anthony Johnson was named to the first team and K.J. Osborn was named to the third team in 2018. Johnson became just the third player in school history with two 1,000-yard receiving seasons in a career with 1,011 yards in 2018. In his two seasons with the Bulls, Johnson had 25 touchdown catches, third in school history. In 2017, Johnson who had one of the finest seasons in school history. The junior receiver led the Mid-American Conference in receiving yards with 1,356 and touchdowns with 14, which was also a school record. Johnson, a first-team All-MAC selection, ranked second in the nation in receiving yards per game (113.0) and third in receiving touchdowns (14). Buffalo’s receivers flourished under Ianello in 2015. For the first time as an FBS program (since 1999) the Bulls had three players with 50 or more catches in a season. Matt Weiser had 63; Ron Willoughby had 61 and Marcus McGill had 50.Ianello brought over 25 years of experience to UB and is recognized as one of the best recruiters in college football. He most recently spent three seasons on the Kansas football staff where he was the recruiting coordinator and wide receivers coach.

The Fundamentals of Coaching Receivers by Urban Meyer
Views: 19836
(11) FREE