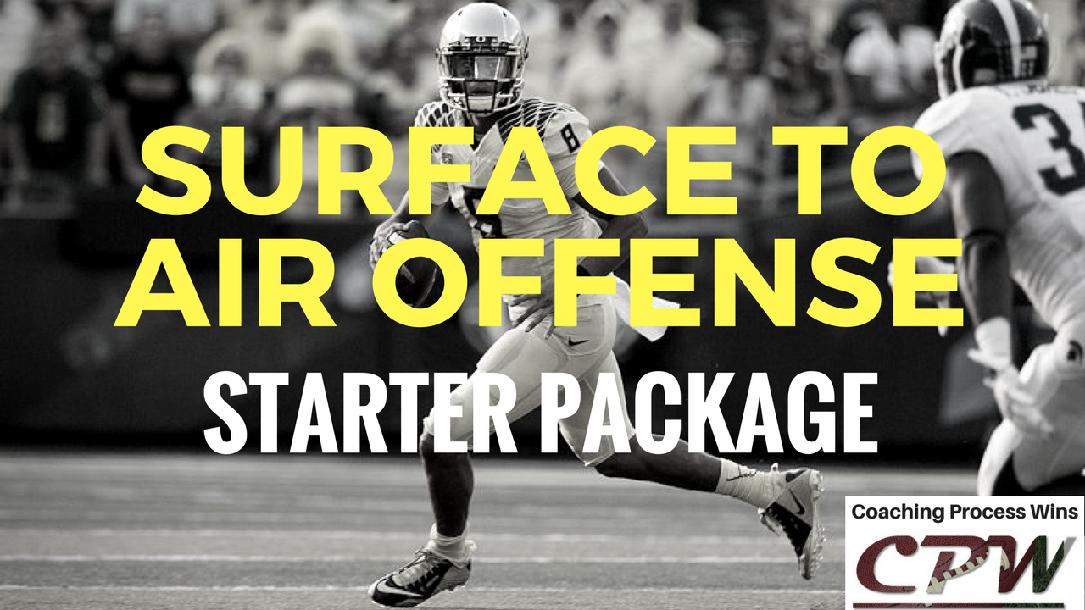 I'm Rich Hargitt, the creator of the Surface To Air System. If you're looking for some new ideas for your offense, you'll want to keep reading...
Here are our state offensive rankings from last year: - FIRST in total passing yards (3,311) - FIRST in passing yards per game (301) - FIRST in passing touchdowns (37) - FIRST in TOTAL touchdowns (65) - FIRST in scoring (453 total points) - FIRST in pass completions (257) - FIRST in completion percentage (70%) - FIRST in total yards from scrimmage (5,348) - THIRD in rushing touchdowns (27) - FOURTH in rushing yards (2,127)   I'll be the first to admit, a lot of that is because of the players we had. BUT, it's also because we've got a system in place that allows them to do what they do best.     I Believe in the RPO It's been very, very good for our players, and even more importantly, defensive guys can't seem to figure it out. Don't believe me? Just ask one of the best defensive minds in the game today:   "I don't think there's any solution to RPO's" - Nick Saban     Want to know more? I don't have all the answers, but what I do have is a set of principles and strategies that have put our offense in the top ten in the state... ...For the past seven years in a row! Now, I'm sharing my exact thoughts on play calling, game planning, and much, much more. I've written several books, produced dozens of videos, but I've never done anything like this.     What people are saying: "Coach Hargitt's system is simple, sound, and an exciting brand of football." - Shawn Watson  Co-OC/QB Coach  University of Pittsburgh      "Personnel advantages are always a fear in game planning and preparation. Coach Hargitt neutralizes those disadvantages by the way he teaches and installs his system." - Rod Smith Co-OC/QB Coach University of Arizona     "Coach Hargitt's system is a simple, yet complete, package for coaches who are interested in installing the spread offense. The terminology and assignments allow for effective teaching and thorough player preparaion." - Pete Lembo Assistant Head Coach University of Maryland     "There are two things that make us successful: repetition and simplicity of plays. Coach Hargitt has done a great job of implementing RPOs in the Surface to Air System in a way that's easy to understand. Now all that's left to do is attack!" - Matt Mumme Offensive Coordinator University of Nevada     Here's What You Get: - A complete video breakdown of one of our best games from last season where I go through every play call and why I called it. - Two seasons' worth of film cut ups of our RPO package to give you plenty of ideas for this fall. - A complete whiteboard installation clinic covering how we teach and call plays with RPO's. - An online presentation where I cover 10 of my favorite One-Word RPO's, complete with game film. - Almost three hours of video on the RPO!  - Lifetime access to all materials!   Don't try to run the RPO until you get your hands on this vital information! Grab this course now and become a more dangerous offense!

Rich Hargitt has been a football coach since 1999. He has served as a head football coach and offensive coordinator at the high school level in Illinois, Indiana, North Carolina, and South Carolina. In 2010, he earned a Master’s of Arts Degree in Physical Education with Coaching Specialization from Ball State University. Hargitt’s teams have utilized the Air Raid Offense to upset several quality teams and the offense has produced school record holders in rushing and passing.  Coach Hargitt’s first Air Raid Quarterback, Mitch Niekamp, holds several college records at Illinois College and is currently a starting Quarterback in Europe’s professional leagues.  He previously contributed to a six-part video series on the Spread Wing-T offense for American Football Monthly and has been published numerous times in coaching journals on the Air Raid Offense. He has spoken for both the Nike Coach of the Clinics and the Glazier Clinics about the Air Raid Offense.  His first book 101 Shotgun Wing-T Plays was published by Coaches Choice in 2012.  Coach Hargitt’s second book 101 Air Raid Plays was published by Coaches Choice in 2013.  Hargitt’s third book, Coaching the Air Raid Offense, was published in 2014.  Hargitt’s fourth and fifth books, Packaging Plays in the Air Raid Offense and Play Calling for the Air Raid Offense, were released in January of 2015.  Coach Hargitt has also collaborated with Coaches Choice on a series of DVDs detailing the Air Raid Offense.  Hargitt brought the Air Raid Offense to Nation Ford High School in 2011 where he helped lead the Falcons to their first non-losing season, first AAA Region victory, first AAA Playoff berth, and first AAA Playoff victory.  In 2012, Hargitt’s offense broke the school single game and single season offensive records for passing yards, touchdowns, and points scored.  Also in 2012, Hargitt helped lead Nation Ford HS to the AAAA playoffs for the first time in school history.   In 2013, Hargitt helped lead the Ashbrook Greenwave to the second round of NCHSAA AAA playoffs and a 9-4 overall record.  He is currently the Assistant Head Coach/Offensive Coordinator at Eastside HS in Taylors, SC.  In 2015 Hargitt’s offense achieved a statewide Top 10 ranking, averaged 383 yards per game (231 passing, 152 rushing), finished ranked in the Top 10 of the state and Top 5 of AAA in passing, achieved 2nd non-losing season in 13 years.  In 2016 the offense improved even further as the team advanced to the SCHSL AAAA Playoffs.  In addition, the offense averaged 488 yards per game (286 passing, 202 rushing) and 41 points per game in the regular season and finished the season in AAAA ranked 4th in rushing (2,127 yards), 3rd in rushing touchdowns (27), 1st in passing (3,311 yards), 1st in yards passing per game (301), 1st in pass completions (257), 1st in pass attempts (365), 1st in passing touchdowns (37), 1st in completion percentage (70%), 1st in touchdowns scored (65), 1st in scoring (453), 1st in PATs made (53) and 1st in total yardage from scrimmage (5,438 yards).  The offense also led the State of South Carolina in Total Yardage from Scrimmage (5,438 yards).  The 2016 offense also featured a quarterback that completed the 3rd most passes in a game and 3rd most touchdown passes in a single game in state history.  In addition, the offense featured a receiver that the 4th most passes in a single game and 6th most passes in a season in state history. Since 2011, Hargitt’s teams have amassed 24,816 total yards with 14,698 of those yards coming through the air and 10,118 yards on the ground.    Hargitt resides in Taylors, South Carolina with his wife Lisa and their sons Griffin and Graham. 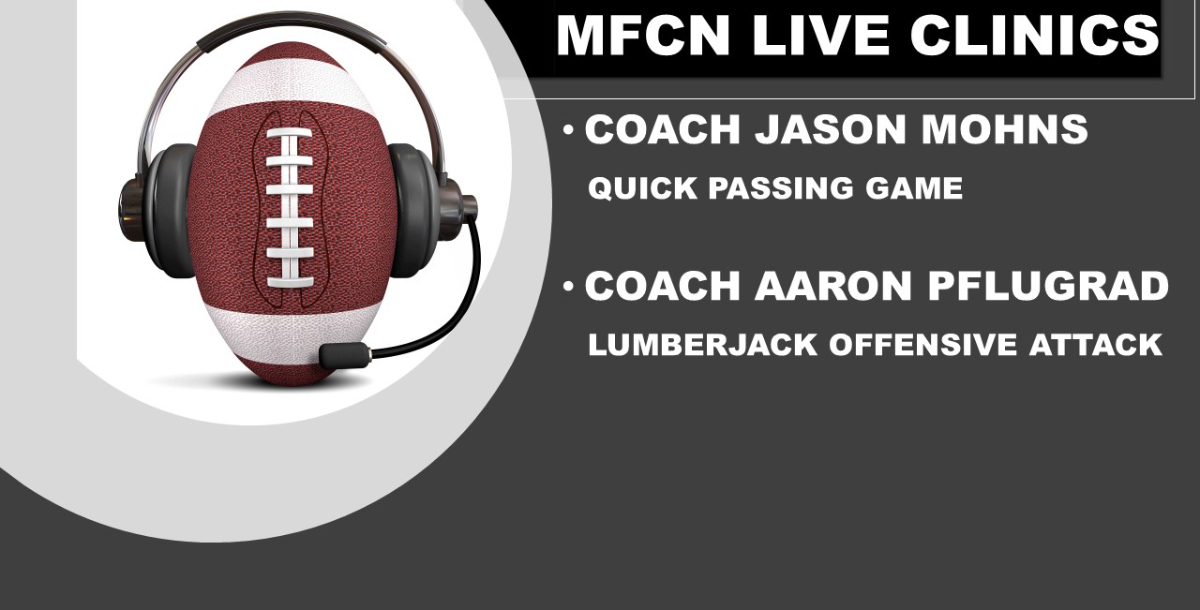 Larry Laird- The Advantages and Reasons to Run an Empty Offense by NYSHSFCA
Views: 3519
$19.99