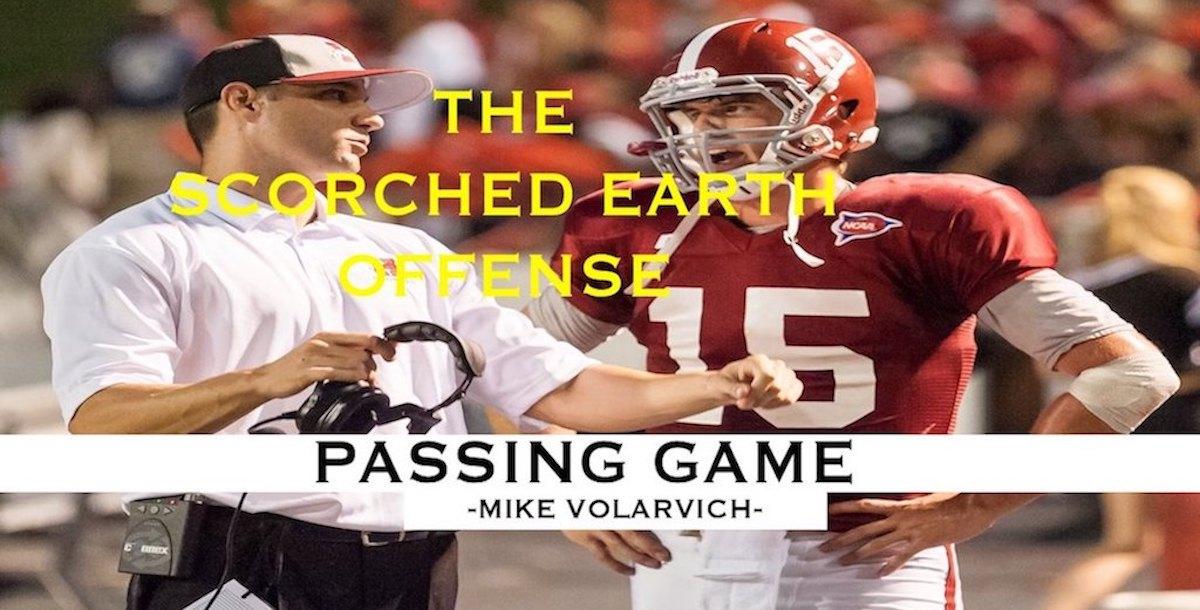 With over two hours of instruction and game film, this course comes loaded with information on how to make your passing game instantly more dangerous.

This course covers topics including:

- Over an hour of game film on each of these plays

- BONUS: Extra film clips of the "Sluggo" and "Sail" concepts

Mike Volarvich just finished his 5th season at the head coach for the Nashville Scrappers. During his first four seasons, the Scrappers have compiled a 55-10 overall record and a State Championship which concluded a perfect 15-0 2015 season. The 26 game win streak to start his head coaching career is the second longest in school history.
In his first season, the Scrappers set school records of Total yards (7166), Total plays (885), Rushing yards (5177), Rushing attempts (646), Rushing TDs (75) on their way to a 15-0 State Championship season. Along the way, Volarvich was named the 2015 conference coach of the year, Texarkana Gazette coach of the year and the Little Rock Touchdown Club Coach of the year.

In 2016, the Scrappers set three state records and four more school records on their way to an 11-1 season. The Scrapper offense set records in Points per game (53.7), TDs per game (7.3), Total points in a game (154), Total Offense (516.7 ypg), TD’s in a Season (90) Yards in a Game (747), and Extra Points in a game (13) as well as Volarvich once again being named the conference coach of the year.
Over the last 6 seasons, few offenses in the nation have been as productive as the ones that Mike Volarvich has put on the field averaging 48.5 points per game and gaining 516.92 yards per game.

Prior to becoming the Head Coach at Nashville High School, Volarvich was the offensive coordinator and quarterbacks coach at Henderson State University. Volarvich was instrumental in making Henderson State one of the top offensive teams in the country. While leading the offensive attack at HSU, the Reddie offense set 57 individual and team records, 29 all-conference players, 10 All-Americans, and 4 Harlon Hill Finalists. Three time finalist, QB Kevin Rodgers finished second in 2014 and third in 2013 along with Nick Hardesty as a finalist in 2010.
While at Henderson State, the offense averaged 476 yards in total offense, 348 yards passing and 42 points per game. The 2013 Reddies led the nation in scoring offense (53.3 points per game), total offense (576.6 ypg.), and passing offense (428.4 ypg). In 2012, the Reddies led the nation in scoring (50.36 points per game), were third in total offense (516.82 ypg), third in passing offense (377.64 ypg), and third in passing efficiency (172.79).

Before his arrival to Henderson, Volarvich was the leader of a potent EMCC scoring offense which led the NJCAA in passing offense and finished second in the nation in total offense. Coach Volarvich has over a decade of coaching experience at the community college level, serving as an offensive coordinator Southwest Mississippi CC, East Central CC, and Blinn College before joining the staff at East Mississippi. Volarvich established himself as one of the most innovative offensive minds on the community college level. During his three years at Blinn College in Texas, the Buccaneers ranked in the top ten in the NJCAA statistically in passing and total offense. Volarvich began his coaching career at Cabrillo College in Aptos, Calif., and has handled other responsibilities throughout his career, including recruiting, academic advising and financial aid consolation. Volarvich, a two-time All-Conference selection at Kentucky State University, was invited to the San Francisco 49ers’ tryout camp and to the Miami Dolphins’ mini-camp in 1999, and played three seasons of professional football in the Arena league and overseas. Volarvich received his bachelor’s degree from Midwestern State University in Wichita Falls, Texas, and later earned his master’s degree in physical education from the University of West Alabama. Volarvich is married to the former Lauren Park of Houston, Texas, and they are the parents of three children, Mischa Elizabeth, Aubrey Lou and Gavin Layne.

Excellent course from an excellent coach! Even if you are running similar concepts there are little tweaks and tips that will help enhance your pass game. Highly recommended!

This is an excellent clinic. Volarvich gets right to the white board, and gives coaches what they want. Loaded with content and I would recommend to all football coaches wanting to learn some great concepts.

The whiteboard installation is taught really good. This is easy to understand and love how the video clips have multiple situations to teach/learn off of. I like how the protection matches with the routes to give the QB a hot route to throw too in case a defense brings unexpected heat.

Coach Volarvich does a great job covering all the details with chalk talk and game film of 30+ passing concepts! This system should take your offense to the next level!

This is a great course for all football lovers. I would very much recommend this course to offensive minds of all schemes and defensive coaches who want to understand the spread passing game offense even more. Coach Volarvich is an offensive genius and i recommend all of his work.

Loved it! Full of some great and very useful information.

Great breakdown of drawing up plays and plenty of film to go along with the plays. Great asset to your playbook.