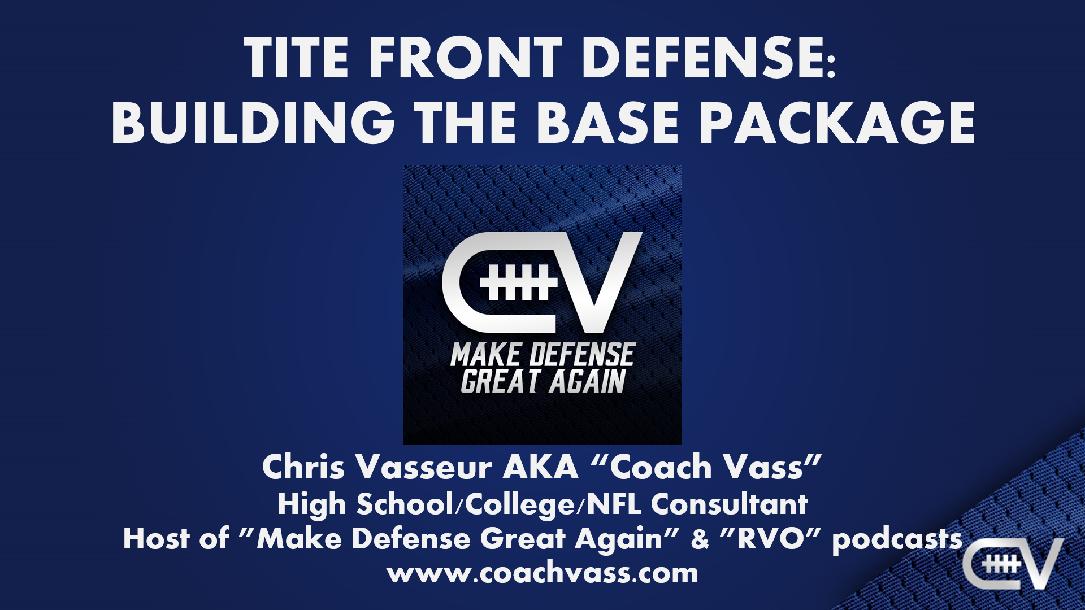 This course is Part 1 of the "Tite Front Defense Bundle" from Coach Vass. If you want to see the bundle containing all three courses, "Building a Base Tite Front Package," "Tite Run Fits with RPO Responsibilities," and the "Tite Front Pressure Package," click HERE!

THIS IS THE "PRE-SALE" OF THE COURSE - FILM WITH COMMENTARY WILL BE ADDED THROUGHOUT THE SUMMER OF 2022! YOU WILL BE NOTIFIED WHEN THE COURSE IS UPDATED!

This course contains the foundation of the Tite Front package, including the base calls needed to build the foundation of a complete, sound defense. Coach Vass takes the viewer through an overview of the package, considerations for building your own package, and the base techniques needed by the defensive front.

Coach Vass examines the base Tite 4 call vs. different formations with an "Insert" rusher and an edge rush variation before going into Tite 3, Strong Rush 3, and an overview of auxiliary calls from other defenses that can be incorporated into the Tite package.

Throughout the course, Coach Vass explains the reasoning, pros, and cons for each decision made when building the package and shows various answers so that the viewer has options for solving the problems that offenses will try to present. Each call shows formation adjustments, each player's run and pass responsibilities, and commentary on the strength and weaknesses of each call, as well as ways to solve those problems.

The second part of the package reviews the main calls addressed in this course with in-depth explanations of how each run is fit, complete with video examples. You can purchase that course HERE.

The third part of the package is the course on pressures. Coach Vass examines how to add a 4th rushers with internal plugs, and edge rushes, Fire Zones with 2 and 3 Deep coverage, 5-man double edge pressures, 2-from-a-side pressures, and 6- and 7-man Eyes/Hot pressures, as well as max peel pressures. You can purchase that course, HERE.

Chris Vasseur, AKA "Coach Vass," is a consultant for football teams of all levels across the world. He has worked with amateur, high school, college, and professional teams, including the NFL. He is also the host of the "Make Defense Great Again" and "Run Vass Option" podcasts. Coach Vass also works with Hudl, hosting clinics and producing content for coaching education. Vasseur also runs a Patreon for advancing all things defense!

Coach Vass' last stop was as the Defensive Coordinator/Corners coach for Clovis High School in Clovis, California. In his first year with Clovis, the 2018 team saw its overall CalPreps ranking improve by 100 spots. Before working at Clovis, Vasseur was the Defensive Coordinator/Corners coach for five seasons at Junipero Serra High School (San Mateo) from 2013-2017. In 2017, the Padres won the 2AA CIF State Championship in California, picking up a league title, section title, and regional title. Vasseur led a stingy defense that gave up only 8.5 points per game in the league and held the #1 offense in the entire country to 14 points in the state game, 7 of those coming on a Hail Mary. The Padres also won a league, section, and regional title in 2016, falling short in the state championship game. In 2014, Serra won a league title, and in 2013, they won the one and only CCS Open Division championship for football in school history and a league championship. In total, Vasseur helped the Padres hang 10 banners in 5 years: 4 league championships, 3 section titles, 2 regional titles, and 1 state championship, with his defenses averaging around 14 points a game given up, in the most competitive league in Northern California.

In 2012, Coach Vass was the Defensive Coordinator/Secondary coach for St. Francis High School in Mountain View, California. Coach Vasseur helped the Lancers win their first section title in ten years, helping the defense shave 8 points a game off of their average points.

During the 2011 season, Vasseur was the Corners coach at Millsaps College in Jackson, Mississippi, coaching with current UIW Safeties coach Brandon Lechtenberg and LSU assistant Ronnie Wheat. In 2010, he was the Secondary Coach and Asst. Defensive Coordinator at Hartnell College in Salinas, California.

Before his second stint in the college game, Vasseur served as the Defensive Coordinator/Corners coach in 2008 and 2009 at Gilroy High School in Gilroy, CA. In 2008, he helped Gilroy shave 9 points a game off their points per game average and a league championship.   During the off-seasons of the 2008-2010 high school/junior college seasons, Vasseur served as a coach for the semi-professional team, the Central Coast Barnstormers in Gilroy, CA. In addition, he served as the Defensive Backs coach in 2009, the Defensive Coordinator/Assistant Head Coach in 2010, and the Head Coach for the 2011 season.

Before coaching high school football, Vasseur served as a Graduate Assistant/Assistant Video Coordinator for football at San Jose State University in the fall of 2006. Chris would later receive his Masters in Arts from SJSU in Kinesiology with a focus in Sport Psychology. In his first football job, Vasseur served as a student assistant in the video department for football at the University of Miami during the final semester of his senior year. Vasseur graduated from "The U" in the Fall of 2006, majoring in Political Science with a minor in Music Business and the Entertainment Industry.

A native of Orlando, Florida, Vasseur attended Bishop Moore High School. Chris has a unique background, writing a book and making a record before the age of 25. On said record, Coach Vass played drums on all tracks, bass on 6 tracks, backup vocals, noise guitar, as well as a mouth trumpet solo on the song, "Never (Always) Been About You."