Types of Tackling with Jason Petrino 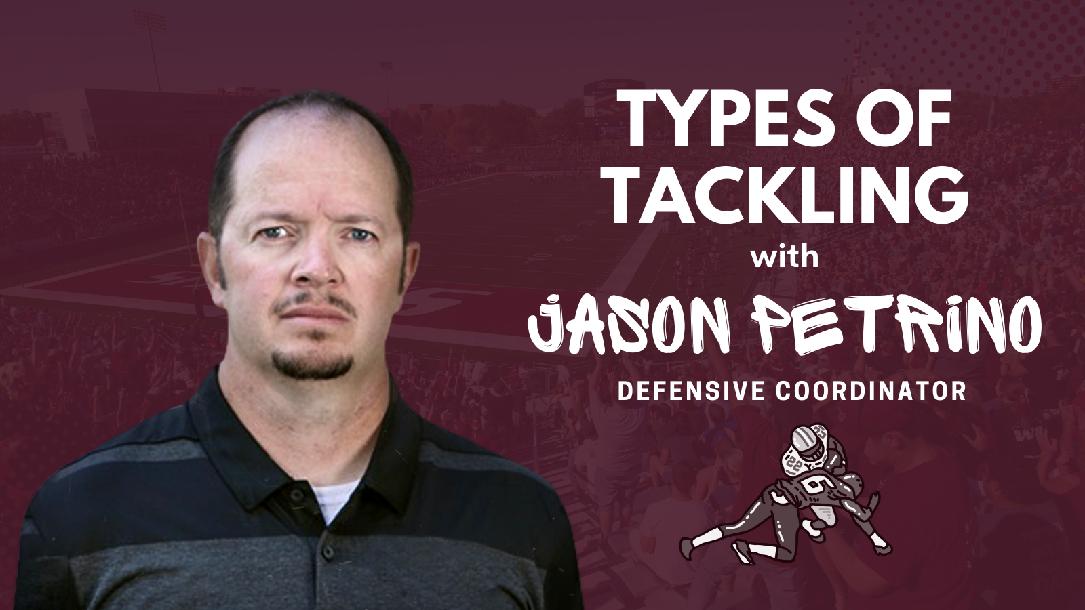 Tackling is part of the sport. It's something you can't avoid, and since it's something you must do, it's best if you learn how to and when to. In order to be a great tackler, a player must have a desire to make the hit. As well as eyes, having the vision to focus on the ball and getting after it. There are multiple types of tackling forms. Profile tackling is effective when you're coming from the side, a shoulder angle tackle. Trunk to Trunk tackling is a close-quarter shoulder to body impact. Strike tackling is a form of attacking the body and lifting simultaneously, attempting to carry and flip the runner. The last chance is the hail mary of tackles, jumping as far as you can to wrap the legs, clip the heels and hold on. Lastly a knockback, the bone crusher hit, the highlight reel tackle.

In this course,  Defensive Coordinator Jason Petrino discusses the 5 types of tackles he teaches his players to make big-time plays. He gives an overview of each and their best approaches as well as video examples to give visual clarity.  Everything you need to create tackling machines is here.

Simply click the ‘Book This Course’ button at the top right of this page, place your order, and you’ll immediately be logged into the training with full access. Take Jason Petrino's strategy and pointers to tackling with you today!

Fall 2021 was Jason Petrino's 3rd season as SIU's defensive coordinator. He was hired on Dec. 10, 2018. The Salukis made tremendous strides on defense during Jason Petrino’s first year in charge of the unit in 2019. In scoring defense, Southern improved from 10th (40.7) to 6th (23.0) — nearly cutting in half the amount of points allowed from the previous season. Similar gains were made in rushing defense (221.3 to 154.0) and passing defense (262.1 to 200.6). He also coached the safeties and mentored All-American Jeremy Chinn, who went on to become a second-round draft pick in the 2019 NFL Draft by the Carolina Panthers.

He is a cousin to former Louisville coach Bobby Petrino and Idaho coach Paul Petrino and has 18 years of experience as a collegiate coach. Prior to SIU, Petrino spent three years as head coach of NAIA Rocky Mountain College in Montana, where he led the program to a conference championship and playoff berth in 2018. Known throughout his coaching career as a defensive tactician, Petrino took on the added responsibility of offensive coordinator in 2018, and the Battlin' Bears led the Frontier Conference in several categories, including points per game (35.0), total offense, and passing yards.

You just booked "Types of Tackling with Jason Petrino"