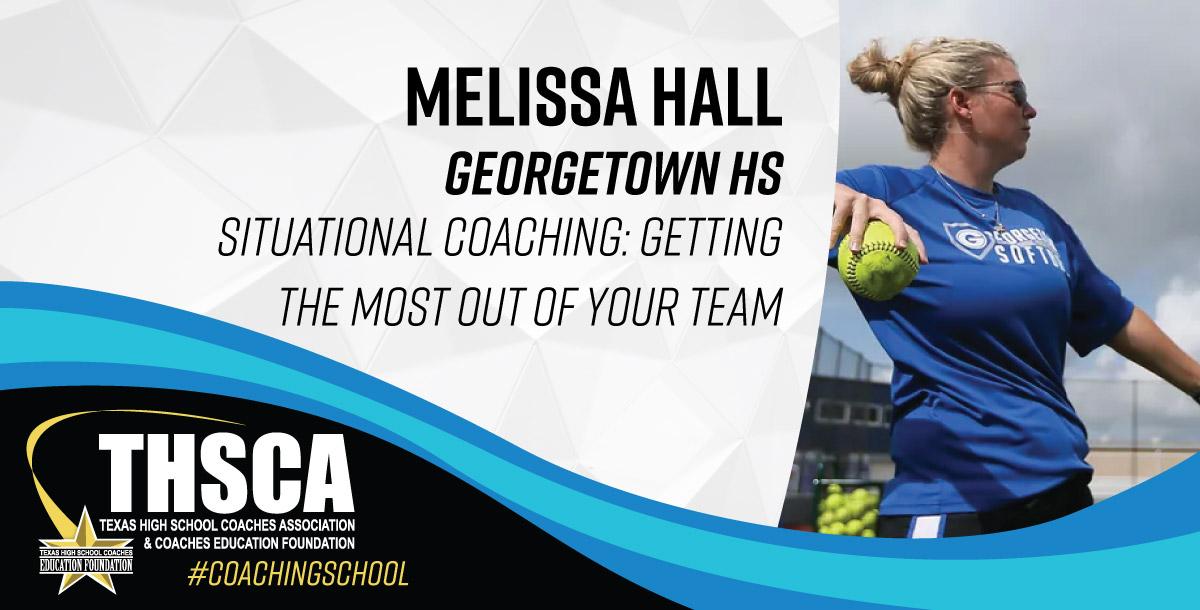 Lecture Title: Situational Coaching: Getting the Most Out of Your Team

Lecture Title: Situational Coaching: Getting the Most Out of Your Team

Coach Hall grew up in Comfort, Texas and is a graduate of Comfort High School.  She played college softball at Howard Payne University and received a Bachelor of Arts Degree in Art Education and a minor in Mathematics.  She continued her education at Texas State University, where she received a Master of Education.  While attending graduate school she was a volunteer assistant coach at Texas Lutheran University during their 2012-2013 season helping them secure 1st in the ASC West while posting a record of 33-10.    Coach Hall began her high school teaching and coaching career at Fort Bend ISD’s Ridge Point High School.  At Ridge Point, she worked with the pitchers, catchers and infielders during practice and was responsible for calling pitches during the games.  Throughout her 4 years at Ridge Point, the program posted a record of 114-29; were Regional Quarterfinalists in 2014, 2016, 2017 and reached the state tournament for the first time in program history in 2015 finishing as State Semi-Finalists.    She began her head coaching career by taking over the program at Fredericksburg High School in the 2017-2018 school year.  In 2018, the team won district and recorded their first playoff win in over 10 years.  In 2019, the program reached the state tournament for the first time in school history and completed the season as State Semi-Finalists.  Over 4 years at Fredericksburg she recorded 3* (covid year) district championships with a career head coaching record of 105-36-1.   Hall recently finished her first year as head coach at Georgetown High School helping the Eagles (34-4) return to the state tournament.  They defeated Aledo in the semi-finals to advance to the school’s first ever State Championship game, where they would eventually fall to the nationally ranked Lake Creek (Montgomery) and finish as State Runner-Ups.