Diversify your Shooting with Kyler Edwards 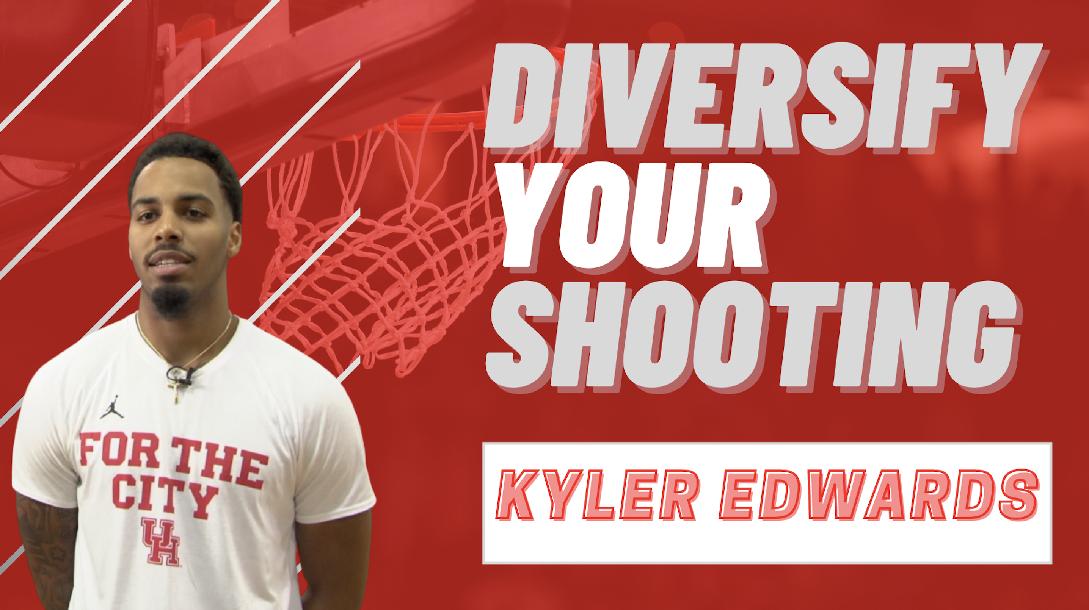 The most significant area of shooting that is disregarded when practicing is creating the space to get a shot off. To become an elite shooter, you need to perfect all the elements before releasing the ball. In this course, we will not only talk about shooting technique and mechanics but also the 10% that none of your competitors are working on that will allow you the space to take the shot.

To do this, we will cover:

If you want to start taking over the game with your shooting, then you need to check out my course.

Introduction
1 Welcome to my Course 0:03
Warm Up
2 Warming up Your Shooting with Consistent Technique 1:38 3 Switching up Your Footwork to Work Mid-Range Shots 2:21
Perfecting Short-Mid-Range Shots
4 Become Unstoppable off the Dribble Through Perfecting Floater Shots 1:39 5 Execute a Hesitation Correctly to Get Your Shot Off 1:39 6 Using Technique to Become Unguardable Against all-sized Players 2:27
Long-Range Shooting
7 Dominate from the 3 Point Line Through Situational Shots 3:17 8 Speed up Your Shooting Through Situation Timing 2:42 9 Progress into the Larry Bird Drill for 3 Point Consistency 1:33
Insight
10 Best Piece of Advice I Have Received 0:38 11 My Favorite Player 0:15 12 Difference Between High School and College 0:22 13 My Motivators and Academics 0:22 14 My Game Day Routine 0:17 15 Next Steps 0:08

JUNIOR (2020-21 at Texas Tech)
Named All-Big 12 Honorable Mention after averaging 10.1 points, 4.8 rebounds, 1.1 steals and a team-leading 2.8 assists per game in his third season with the Red Raiders...  Scored a season-high 20 points in a home win over TCU where he was 7-for-8 from the field, including 4-for-5 on 3-pointers...  Had two 19-point games wins over Abilene Christian and at Iowa State... Led the Red Raiders with 56 3-pointers on the season, making at least one in 27 of 29 games played...  Finished the year shooting 56-for-134 (41.8 percent) from beyond the arc and made 3+ in eight games after going 3-for-6 and finishing with 11 points and five assists against Arkansas in the NCAA Tournament Second Round loss...  Scored 12 points and had six rebounds and four assists in the NCAA Tournament First Round win over Utah State...  Averaged 2.8 assists for the season started with a career-high seven assists in the season opener against Northwestern State and also included a six-assist performance against West Virginia at home...  Recorded his first career double-double with 13 points and 11 rebounds in a win over Grambling where he also had five assists and two steals...  Scored in double figures in 15 games, including leading the team with 18 points at Baylor in the regular-season finale, where he was 4-for-6 on 3-pointers to go along with four assists...  Through 98 games, has now scored 856 points and recorded 218 assists and 347 rebounds...  Along with his success on the court, was named to the Academic All-Big 12 First Team.

SOPHOMORE (2019-20 at Texas Tech)
Averaged 11.4 points, 4.0 rebounds and 3.1 assists per game...  A starter in all 31 games, scored a career-high with 24 points at Kansas State where he went 9-for-14 from the field with three 3-pointers and followed it by making a career-best five 3-pointers in a 22-point performance against Iowa State...  Led the Red Raiders in scoring in four games and had a career-high nine rebounds at West Virginia with nine points...  Scored in double figures in 17 of 31 games with three games of 20+ scoring with the addition of a 20-point game against CSU Bakersfield...  Finished the season making 48 3-pointers, which was third most on the team with 14 games of 2+...  Along with hitting five 3-pointers against Iowa State, also had four 3-pointers in the 46-point win over TCU at home...  In conference play, averaged 11.4 points per game...  Along with his scoring, had 95 assists for the season with 20 games of 3+ assists, including matching his career-best with six assists at Kansas...  Earned Big 12 Player of the Week on Jan. 20 after his performances at Kansas State and against Iowa State.

FRESHMAN (2018-19 at Texas Tech)
Averaged 5.5 points, 2.2 rebounds and 1.1 assists per game where he helped lead the Red Raiders to the National Championship Game...  Scored 12 points in the national final against Virginia after going 4-for-5 from the field, including going 2-for-3 on 3-pointers and then also knocking down two free throws in the overtime game...  Played in all 38 games in his first season as a reserve and finished the year with 42 assists, 23 steals and 31 3-pointers...  Scored a career-high 19 points in a win over Northern Colorado where he went 7-for-7 from the field with four 3-pointers and had five double-digit scoring performances on the year...  Began his collegiate career with 10 points in the season opener against UIW and followed it with nine points against Mississippi Valley State...  Scored 10 points in games against Arkansas-Pine Bluff and Abilene Christian...  In conference play, had a high of nine points in games against Kansas State and Iowa State...  Averaged 5.8 points per game in six NCAA tournament games capped by the 12-point performance against Virginia...  Also had eight points in Elite Eight win over Gonzaga, where he hit two 3-pointers...  Added six points in the Final Four semifinal victory over Michigan State where he also had four rebounds... Finished the season shooting 31-for-69 (44.9 %) from beyond the arc.

You just booked "Diversify your Shooting with Kyler Edwards"