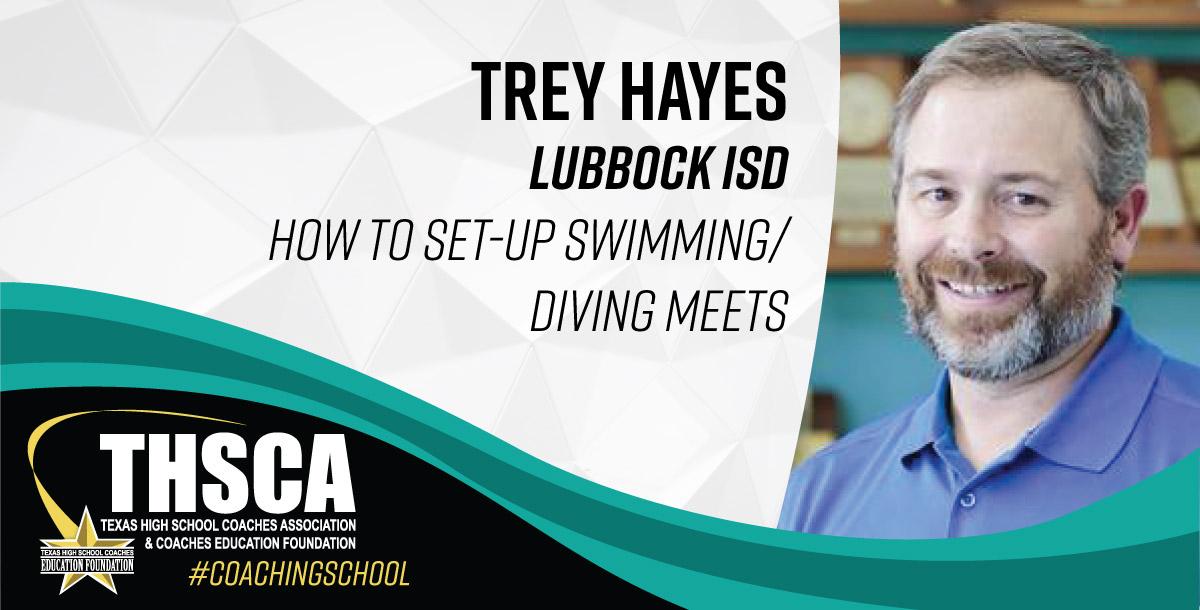 Trey Hayes graduated from Lubbock Coronado High School as a two-time All-state swimmer and team captain. He swam for Northeast Louisiana University for John C. Pittington. He was a two-time team captain, school record holder and conference champion. He graduated with a degree in Social Studies Education with a minor in physical education and health. Trey began his teaching and coaching career in Amarillo Independent School District teaching sixth grade social studies and assistant swim coach for the district. In 1998, he was hired by Lubbock Independent School District as the head middle school swim coach. He served in that role for three years before getting hired as the head high school swim coach for the for the Lubbock ISD in 2001. In 2010, Trey was hired as co-aquatic director for the Pete Ragus Aquatic Center, while continuing to serve his duties as the head swim coach. In his time as head coach, his teams have won 52 district team championships (26 girls and 26 boys), three of his four schools have won a team district championship. They have won 24 regional team championships (14 girls and 10 boys). This year his Lubbock High girls have won their third straight 5A State Championships (2020, 2021 & 2022). He has been selected as the district coach of the year 53 times (27 girls and 26 boys). He has been selected as the regional coach of the year 34 times (15 girls and 19 boys). He was selected as the NFHS state boys swim coach of the year in 2011 & girls NFHS coach of the year 2020. He has been selected the TISCA 5A State swim coach of the year in 2016, 2020 and 2022. He has been named the state coach the meet three years in a row. He has coached a total of eighteen High School All-Americans, including FINA World Champion Madisyn Cox. He has been married to April for twenty-seven years. Together they have two children, Tyler, who attends Texas Tech University and Reagan, who swims for Incarnate Word University.