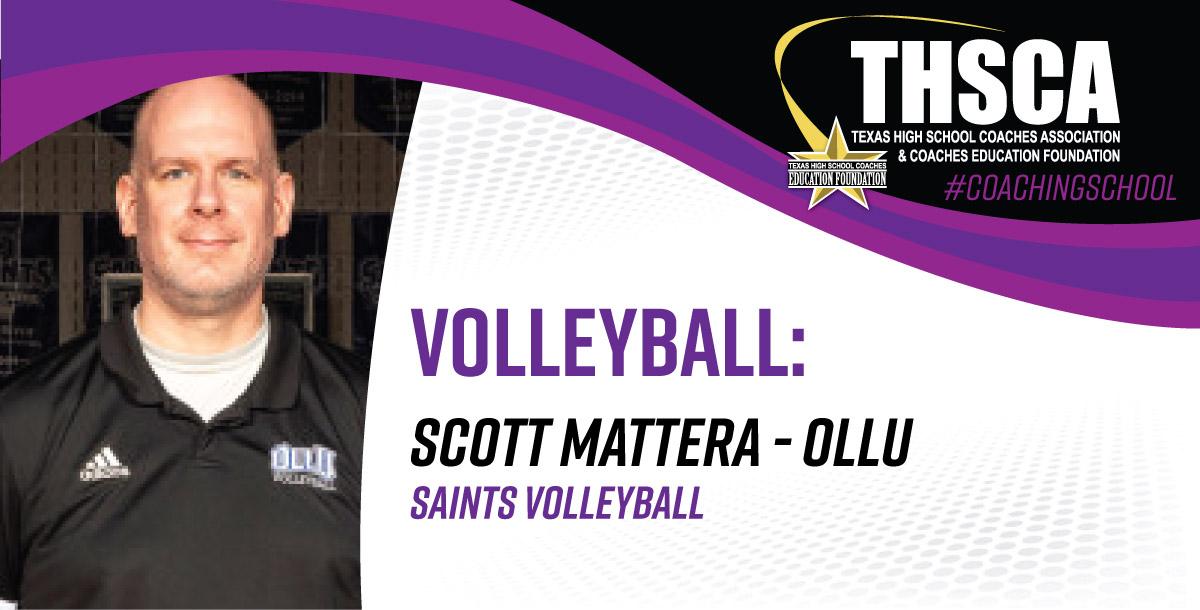 SCOTT MATTERA is beginning his first season as volleyball head coach at Our Lady of the Lake University (OLLU).

Mattera comes to OLLU from an assistant coach position at Bellevue University following a successful career as both a head coach and assistant coach in the NAIA, as well as in the high school and club ranks. He has also spent time as a volunteer assistant coach at the NCAA Division I level.

Mattera spent six seasons as the head coach at Concordia University-Nebraska from 2012-2017, helping the Bulldogs advance to the program's first-ever NAIA National Tournament appearance in 2015 while earning Great Plains Athletic Conference Coach of the Year honors. Below are Mattera's coaching highlights at Concordia.

His achievements at Concordia include: record of 97-94; Inherited program coming off four straight seasons of 11 wins or less and steadily built it to national prominence; Reached national tournament for first time in school history in 2015; Named Great Plains Athletic Conference Coach of the Year in 2015; Achieved top 25 national ranking in 2015 and the start of 2016; Mentored three honorable mention All-Americans and numerous all-conference performers; 44 NAIA Scholar-Athletes in six seasons, team GPA above 3.5 each year, AVCA Team Academic Award all six seasons

Mattera came to Concordia after serving as the top assistant coach at Montreat College in Montreat, N.C. He helped guide the Cavaliers to a 25-14 record in 2011 and a berth in the NAIA National Tournament. In addition to coaching at Montreat, Mattera assisted with game management and taught in the sport management department.

Prior to Montreat, Mattera was a volunteer assistant coach at the University of Toledo during the 2010 season. During his one season with the Lady Rockets, Toledo upset the University of Michigan as well as Creighton. Mattera also helped guide the Lady Rockers to a straight-set upset over top-seeded Ball State in the Mid-American Conference Tournament.

Mattera's administrative background includes being the owner and general manager of Synergy Sports and Fitness of Toledo, a 60,000 square foot volleyball and fitness facility, from 2004-06.

Mattera holds a decorated coaching history in the Ohio high school ranks. He began his career in 2002 as the JV coach of St. Ursula Academy. In two years, he compiled a record of 44-3, winning back-to-back city championships. After taking a year off to open Synergy Sports and Fitness, Mattera returned to high school coaching as the head coach at Notre Dame Academy from 2005-10. In just his second year with the Notre Dame Academy, the Eagles knocked off St. Ursula, ending their 139-match winning streak.

Notre Dame Academy went on to win back-to-back city championships in 2007 and 2008 and won the district in 2007, the first in school history. Mattera was awarded the City League and District Coach of the Year in 2006 & 2007, and his teams were consistently ranked both in state and national polls. During his time at Notre Dame Academy, the Eagles produced five Division-1 college athletes, in addition to numerous D2, D3, NAIA, and NJCAA recruits.

Mattera earned his bachelor's degree in finance from the University of Toledo in 2001, graduating with honors while also playing for the men's club volleyball team. He earned a master's degree in liberal studies with a focus on the sociology of sport, also from Toledo.