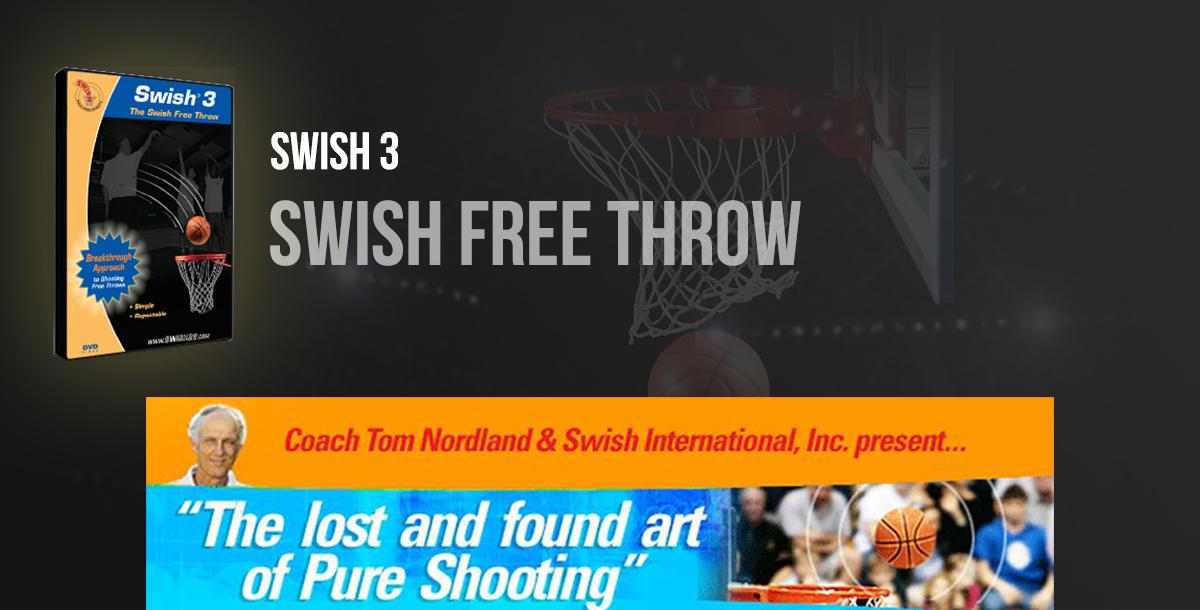 Check it out!  It will teach you, step-by-step, how to coach yourself or others to excellent Free Throw shooting.  It comes with a 90-day unconditional money-back guarantee so you have nothing to lose!  View the sampler video below.  It will give you a good "taste" of what's in Swish 3!

This third video expands the Swish methodology, focusing on the humble and humbling Free Throw. My explorations led me to discover how Newton’s First Law of Motion, the “Law of Inertia,” applies to shooting a basketball, in this case, the Free Throw. The Law says: “An object in motion tends to stay in motion and in the same direction until affected by an outside or unbalanced force.” In basketball, if you can set the ball on line and get it moving (accelerating) before the Release, you’re generating powerful Inertia which, if “caught” (by not pausing or stopping the action), will lead to much greater accuracy.

I compare the Swish approach to the commonly-taught instructions that got us in this shooting mess in the first place. I show how “Squaring Up,” “Wrist-flipping,” “Reach your hand into a Cookie Jar,” “Elbow under the ball,” etc., make shooting more difficult, not easier. They affect power and alignment and increase the possibility of variation. Swish is about minimizing variables, not increasing them.

Tom grew up in Minnesota playing many sports and has been involved in athletics all his life. He became a high school basketball star and is considered one the best shooters ever to come out of that state. In 1957 he led Minneapolis Roosevelt to its second straight Minnesota State High School Championship and was named All State and a scholastic All American. He set a free throw record in the State Tournament championship game (19 of 20 in one game) that still stands, tied in 2007. He attended Stanford University on a basketball scholarship.

Twenty five years ago, at the age of 50, he re-discovered what he had learned as a teenager that made him such a great “pure” shooter – simple and powerful stuff anyone can learn. Since those discoveries, Tom has researched shooting and perfected his coaching of the skill. In early 1997 he produced his first video on shooting called “Swish -- A Guide to Great Basketball Shooting.” In Dec. of 2005 he produced his two-hour “masterpiece” sequel video, called “Swish 2 -- Learning and Coaching the Swish Method.” Swish 3, on the humble and often humbling Free Throw, completes a Trilogy and came out in 2012. These videos are getting raves and complimentary testimony from more and more players and coaches around the world.

A Coach for all levels, from beginner to NBA professionals
Tom’s has worked with all levels, from grade school and middle school to high school and college levels, as well as with NBA and WNBA players. Tom has found that everyone needs the same basic instruction. And, what he teaches is not new. It’s how the greatest shooters have always shot. The latest example is Steph Curry, who shoots this way exactly!

Articles about Tom’s coaching have appeared in the Indianapolis Star/News, The Christian Science Monitor, The Salt Lake Tribune, The Oakland Tribune and The San Francisco Chronicle. He’s been interviewed on ESPN Radio and other sports radio talk shows.

His Method Reveals the”Secrets” of Great Shooting
Tom’s Swish Method reveals how to learn and coach great shooting. Though fundamentals are important and are addressed, the emphasis is on the “Flight of the Ball.” The player is taught how to control body movement and power such that ball flight is Accurate, Consistent and Repeatable! Great shooters’ shots are always around the rim. They rarely have a bad day. Tom’s method shows how to achieve that kind of control with an effortless, high arching and repeatable shot motion. This is the answer to today’s need in the game of basketball for a method that really works and doesn’t take thousands of hours to learn.

Visit his website, http://www.swish22.com/, for extensive information on Tom and his method, including remarkable endorsements and testimonials, video clips, articles, blogs and other background information.

Shooting clinics
Tom puts on shooting clinics and camps across the country, “Empowering players to practice,” as he puts it. He teaches players of all levels that great shooting is not that difficult and that anyone can learn the skill to a fairly high level of proficiency, and mastery is available to those who really apply themselves to the simple method. The key is in the “practice,” and Tom shows people how to do that -- what to practice and how to do it ... how to coach themselves, the only way it’s really going to work.