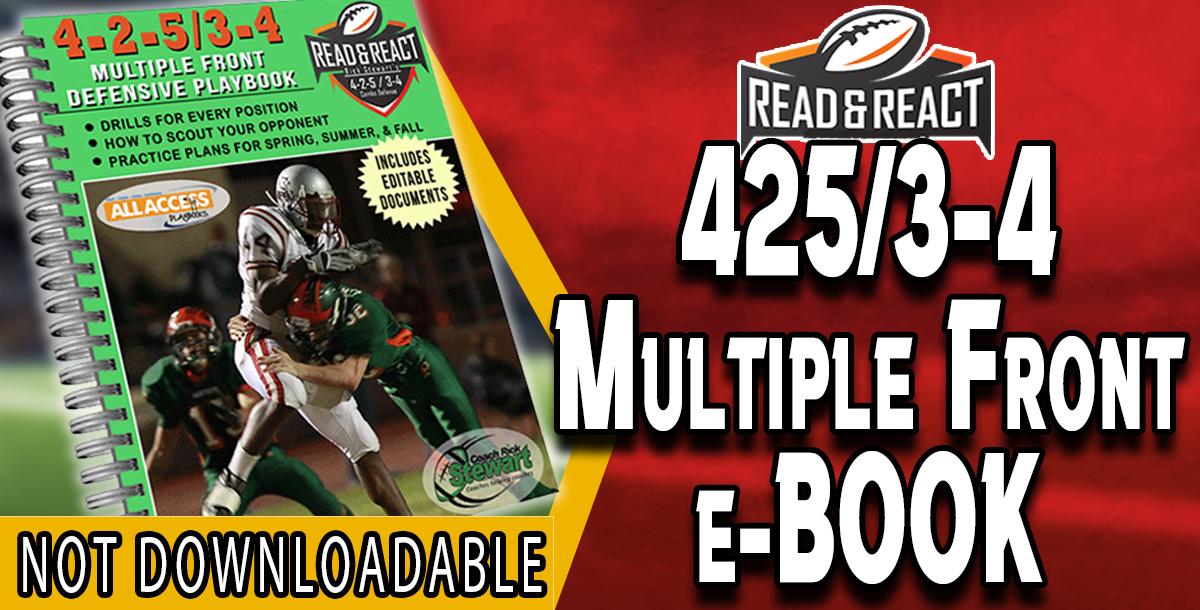 DISCLAIMER:  This is not a downloadable product.  You cannot download or print this book from the CoachTube website.

The READ & REACT Multiple Front Defense has a 0-tech NG and a 4-tech DT who slants weak, putting them in the same position as traditional 1 and 3-techniques once the ball is snapped.  The philosophy is that head up defenders create more confusion for the blockers since they can slant into either gap.  The 0-tech alignment makes for an easy transition from 4 man to 3 man front.  The uncovered guards give very clean run/pass reads to the defense.

The “Front 6” consists of four DL and two ILB who align to a run strength.  The “Back 5” align to the multiple receiver side.  This separation of the run and passing strengths is referred to as a “DIVORCED FRONT”, which allows the defense to have multiple looks while remaining simple to learn (multiplicity with simplicity).  Formation recognition is also easy to learn by splitting every formation in half, effectively reducing every offensive formation to 6 alignments.

Section 4 has “Every Day Drills” (EDDs) that are used in practice to teach the positions and explain every position’s Alignment, Assignment, and Responsibility.  In the defensive line chapter, the STUD and END techniques are not the same as the TACKLE and NOSE techniques.  The Outside Linebackers are actually HYBRID SAFETIES and their techniques are more similar to the defensive backs.

This defense is a contain and turn it back inside philosophy.  The goal of every run play is to force the running back into a very narrow “alley” in which he will be outnumbered 3 to 1.   The beauty of the Read & React 4-2-5 is that each player’s job remains the same regardless of whether you are in the 3-4 or 4-2 fronts.

Backfield actions are broken into fast flow, split flow, and counter flow.    The 2 inside linebackers play 20 technique and read the uncovered guards which allows clean reads and aggressive reactions.  The defensive line primary job is to “sting” their man and keep the offensive lineman from blocking the linebackers.  They are taught to react, not read, to the five things an OL can do: reach, fire out, escape inside, pull, and pass block.  The secondary provides the force, alley, and contain players as the Falcon (FS) is an aggressive run defender and the corners provide secondary run support.

As previously mentioned, the Read & React method of teaching divides the field in half, thereby narrowing the teaching of 4 coverages (man, 2, 3, 4) versus 6 alignments (pro, solo, tight, wing, twins, & trips).  These chapters start with 1 on 1 route defense and progresses to multiple route recognition based on our “+1” rule:  Always have 1 more pass defender than they have receivers.  This section has 4 chapters dedicated to pass defense.

Section 6 takes you through how Stewart starts scouting his opponent in the spring and takes you up through “Saturday to Friday” game week preparations.  There is detailed explainations on how to use HUDL most efficiently.  Practice organization and how to fit everything into a 75-minute practice Mon – Wed is also detailed.

Email coach Stewart for game playsheets, wristbands, scouting reports, and player evaluation forms that can be edited with Microsoft Office.  There are also 10 spring practice, 6 summer, and 20 August practice schedules that you can customize to your needs.   All the tackling drills, pursuit drills, and individual position EDDs are in pdf printable form.  There are also powerpoints to show your staff and players.

If you're looking for a defensive system and playbook to buy, this one is the only one you'll ever need. Having been an offensive coach most of my career, I needed a defense that I could understand and install, and more importantly, teach my KIDS to run it. Knowing how passionate Rick Stewart is about football, kids and helping coaches, I turned to this multiple 4-2-5 Read and React defense. With all the different styles and tempos offenses are running these days, there's more stress on DC's and defenses. This defense has everything you'll ever need, and it's setup in an easy to learn, and easy to teach format for all high schools. We are an average size school with a small roster. This defense allows us to play to OUR strengths, and allows us to best utilize the talent we have. Easy adjustments, simple assignments, practice and game planning are all here in a super easy to install format. We can shift from a 3-4 look against 10 personnel to a 4-2-5 defense against 21 personnel in a snap. The book also shares the how and why Coach Stewart and his staff created this system the way they did, which is a huge help to all coaches trying to get a better understanding of the whole scheme. Whether you are at the biggest level in your state, or in the smallest division, or like us somewhere in between, this is the only defensive system you'll need. It's simple enough for all levels, thorough to handle all offenses, and the kids love it.

Very detailed and easy to use.

Great put together a defense. Great teaching points that go over each individual position. There is enough information here to run this at the youth up to the Varsity level of High School.

This is a great resource, and I'm looking forward to implementing the material this summer. My only hope was that I could print, highlight/take notes on the pages for my own benefit.

I can't put this book down. So much information. And to top it off, Coach Stewart emails you practice plans, drills, and powerpoints.

Always been an offensive coach, but had to switch to defense. This book was my "go-to" book all year. So many DCs make things so complicated, but this is simple to teach and simple to run. With all the different styles and tempos offenses are running these days, there's more stress on DC's and defenses. Love how easy it is to switch from 7 to 8-man fronts, from 4 DL to 3 DL. With the amazing support Stewart gave via email and over the phone, we brought him in for a 3-day install...which he should have charged double for. Stewart is an amazing teacher.

So much information. There is literally stuff in this book that would help any defense, not just the 425 or the 34. All in color. And coach Stewart emailed us right back to answer all of our questions.

Excellent book. All in color. All you need to run a defense. Ridiculously simple. And Stewart will email you right back with handouts & attachments

Very detailed explanations. Every scenario on defense is covered, plus drills, and practice schedules. I will probably look at this book every weekend during the season for answers.

Everything you need to teach and feel confident in a defense!