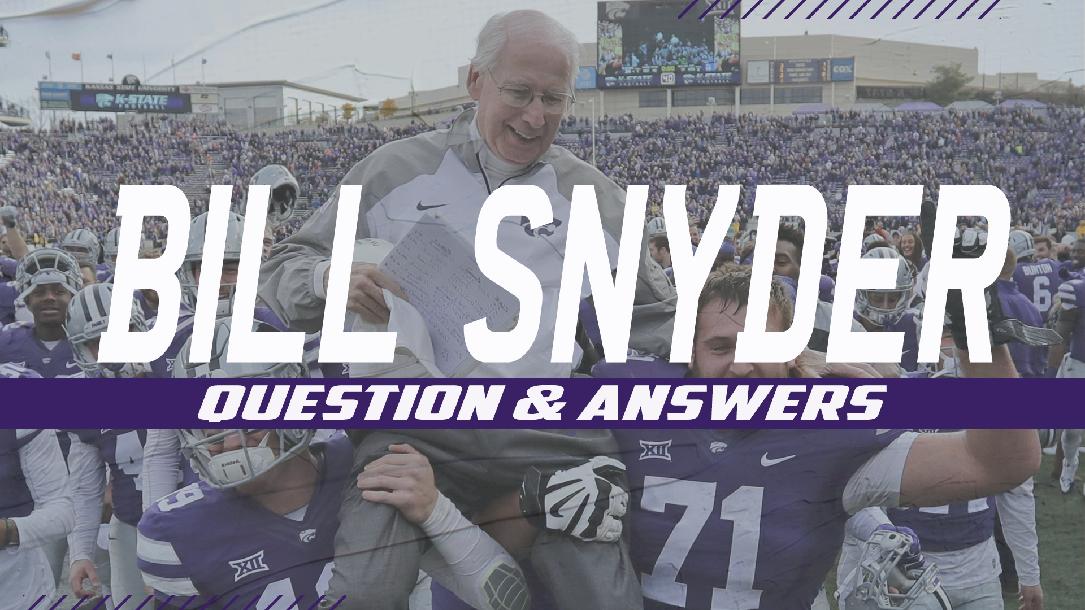 Bill Snyder transformed the program at Kansas State University.  He sat down to talk to us about his career and what he believes to be the important elements to lead a winning football program.

1 What inspired you to become a coach? 2:09 2 What did you learn from your mentors? 3:33 3 What values formed your culture? 4:43 4 How did you evaluate a recruit for fit in your culture? 4:47 5 How do you learn more about a recruit? 2:08 6 How do you develop a culture where there's never been any? 9:39 7 How do you evaluate a potential coach for fit in your program? 1:33 8 How did you manage to develop so many head coaches and maintain continuity? 3:23 9 What did you look for from assistant coaches in practice? 3:01 10 How did you help an assistant understand when he was ready to be HC? 2:46 11 What are the key components for creating a culture in a position group? 3:59 12 How did you prepare transfers to contribute so quickly? 2:14 13 Along with turnovers what stats are important? 2:22 14 How did you evolve your offense while hanging your hat on what is tried and true? 1:39 15 What was foundational in creating special teams success? 3:10 16 How did you balance family with demands of running a program? 1:45 17 What would you have done differently? 4:10 18 How do you deal with a disgruntled player? 4:00 19 What did you as a coach that gave your players the winning edge on and off the field? 1:57

Moving the Chains! We Maybe Staying Home but we can Help each Other Develop. Coaches Helping Coaches

200-Game Winner and Hall of Famer, Kansas State head coach Bill Snyder exemplifies what it means to be an elite coach.

Snyder gained a reputation as an innovator and mentor in college athletics through his values, sincerity, warmth and concern for all the people he was involved with.

The architect of the “greatest turnaround in college football history” returned to the sidelines in 2009 with hopes of revitalizing a program that he once built, piece by piece, into a national force. And, after nine seasons back in charge, he did just that – and then some.

Over his last nine years, Snyder led K-State to 73 victories – an average of 8.1 wins per year – advanced to eight-straight bowl games, won a conference championship in 2012 and finished fourth or better in the ultra-competitive Big 12 Conference in five of the last seven seasons. The Wildcats’ eight-year bowl streak tied for 13th in the nation and third in the Big 12.

Kansas State under Snyder was a model of consistency, and that didn’t changed in his second tenure. From 2009-17, only 11 FBS programs had the same head coach but only four – K-State, Alabama, Clemson and Oklahoma State –  totaled at least six wins in all nine seasons.

Furthermore, Snyder became just the 26th coach in the history of college football to reach 200 career wins and only the sixth to do so while coaching at the same school for his entire career as he hit the mark against Kansas in 2016.

Outstanding free opportunity to learn from one of the greatest program-builders of all time. Excellent info on getting players to buy in on special teams, building team culture, being and contrarian on offense.

Bill Snyder transformed the program at Kansas State University. He sat down to talk to us about his career and what he believes to be the important elements to lead a winning football program.