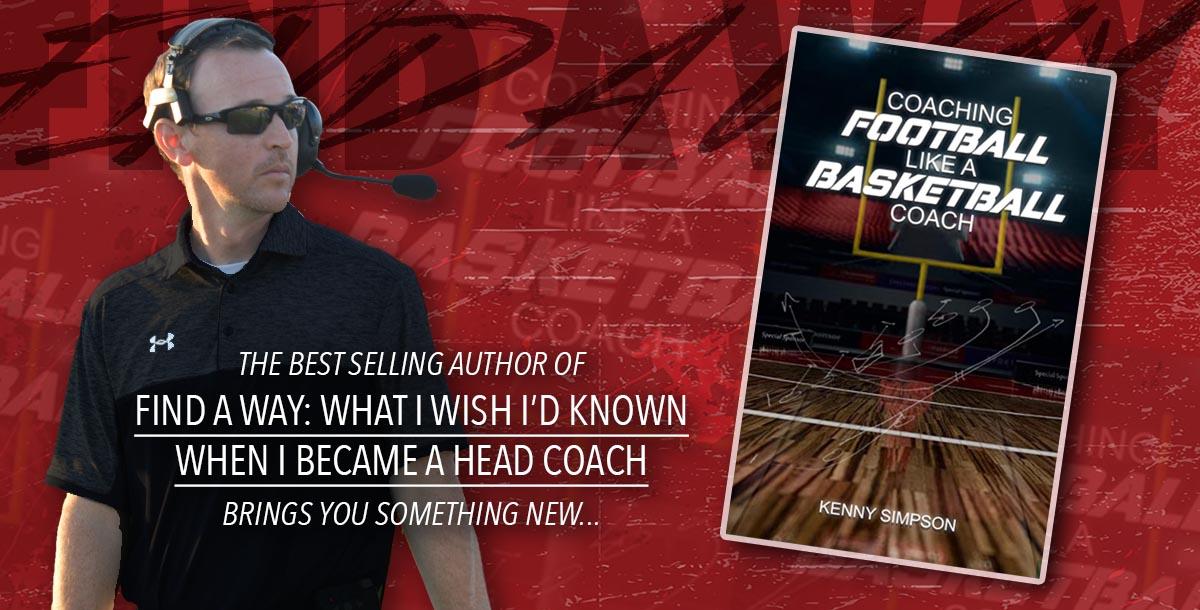 *THIS IS NOT A DOWNLOADABLE FILE*   It can be read on Coachtube.com.  If you are interested in a physical copy go to FBCoachSimpson.com to order.

Football clearly is not basketball or baseball or any other sport. However, the changes we are seeing in football have more to do with the use of space and the ability to “adjust” plays. This concept is seen easily through the game of basketball as it is a fluid game that requires adjustments each time up and down the court. Many football programs are embracing this concept in their own programs. The goal of this book is to cause you to think of “why” you are teaching skills and drills to your players, and to cause you to know the “why” of your scheme and how it must be able to adjust. This book is geared for football coaches. While it uses concepts from Basketball to prove some points.

Coach Kenny Simpson has scored another touchdown with his book. Outstanding read that will help any coach grow and improve. Great wisdom and insight in relating football coaching to basketball." - Tim Horton, Running back coach Vanderbilt University

"This is a dynamite read! Coach Simpson has taken a unique look at coaching football by learning from another sport: basketball. As I read this book, I was really inspired to think more deliberately about football teaching methods. I enjoyed his take on "As football coaches we do XYZ, but basketball coaches do ABC." He then goes on to explain those differences, while at the same time making football coaches critique their own practice "why’s and how’s." I think this is tremendous offseason reading as coaches evaluate themselves and their practices." - Chris Fore, Eight Laces Consulting, California Coaches Association President

"Coach Simpson is a class act. He is always connecting and trying to help coaches. Coach takes a fresh approach with this new book and it’s a slam dunk”.- Shea Monroe, Alabama Spread and Defense Clinic

"Coach Simpson has done it again! This book challenges football coaches to become more dynamic in their approach to teaching the game. Coaching “concepts over plays” will allow coaches and players to have a deeper understanding of their playbook and how it can be used in every situation." - Brent Morrison, Head Football Coach at Westerville Central High School, Ohio

Coach Simpson is currently the Head Football Coach Searcy High School, the defending 6A state champions in Arkansas. He accepted the job at Searcy in June of 2020. Before Searcy, he was the Head Football Coach at Southside Charter. Taking over a program that had won eight games in five seasons and had been on a 20+ game losing streak, Simpson has led Southside to the playoffs for four-consecutive seasons and won two conference titles in the past three seasons. For his efforts, he was named 4A-2 Conference Coach of the Year (2017), named to the as a finalist for Hooten's Coach of the Year (2017) and has been the All-Star Nominee for the 4A-2 (2016 and 2019). He was also selected to coach in the 1st FCA Texas-Arkansas All-Star Showdown (2020).

Coach Simpson wrote his first book in 2019. Another book is already in the works and will be available in 2020. Find A Way: What I Wish I'd Known When I Became A Head Football Coach, has already been a best seller on Amazon in several categories.

Panther Offense vs Bronco Defense in the Super Bowl by Alex Kirby
Views: 3410
$9.99

You just booked "Coaching Football Like A Basketball Coach"