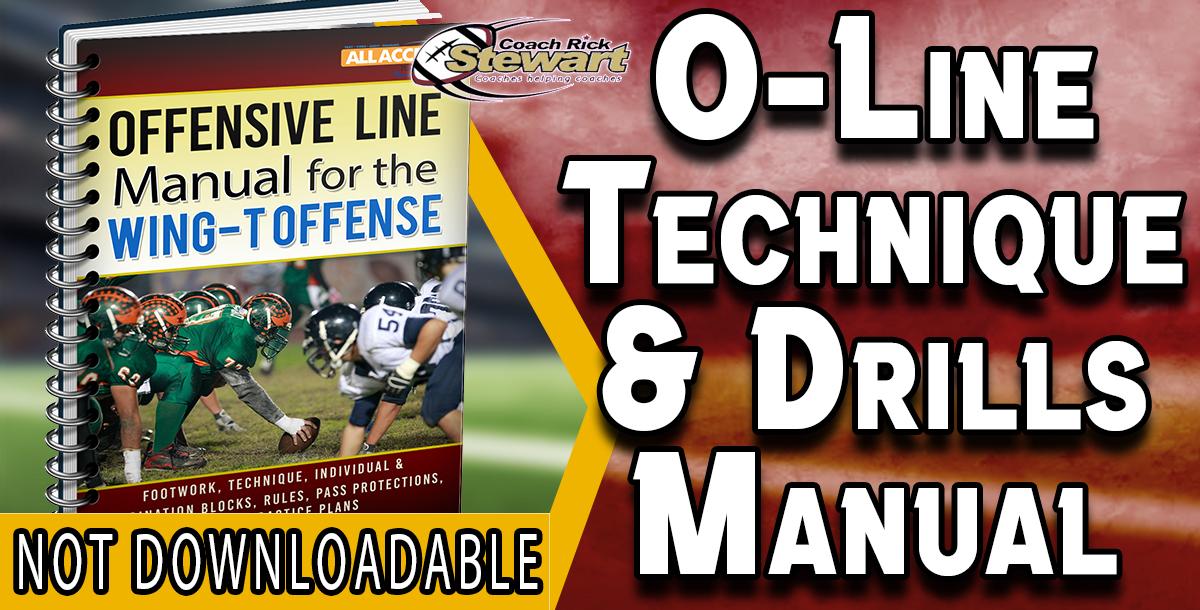 This Manual has a lifetime guarantee.  Any updates that Stewart makes will be included here, so you will get ALL future editions & updates.

DISCLAIMER:  This is not a downloadable product.  The printed, bound book can be shipped to you if you order on www.allaccesscoaching.com

-->  A chapter on strength & conditioning specific for linement

While this book is based on the wing-T offense, with its misdirection,  power,  counter,  option,  play-action,  and dropback capabilities within the system, this book shows how to take advantage of the UNDERSIZED linemen at the high school level.  Iso schemes, power schemes, the ability to zone block, mobility to pull and log or trap, and the ability to be an effective pass blocker, are among the skills that a lineman in the wing-T offense must develop.

This book will give you a clearly defined system of drills and progressions used in teaching line play. While the system of teaching wing-T offensive line techniques is very structured and systematic for the wing-T offense, I believe that the drills, skills, and coaching points taught are effective in ANY offensive scheme. The blocking techniques include sound principles of offensive line play, regardless of scheme, and can be used with the I, option, zone, or any other offensive philosophy.

WITHOUT THE LINEMEN, FOOTBALL WOULD JUST BE A GAME OF CATCH

The drawings were so detailed. All in color. 3D versions of actual players. Loved the buzzwords. Couldn't put it down, read it cover to cover over the weekend. And emailed Coach Stewart, he got back to me right away with a bunch of attachments.

The drawings are in great detail. These aren't circles made in Playmaker pro. These are actual players drawn in Photoshop, makes it so much easier to tell what the drills are.

6 chapters on pass protections? Strength & conditioning? 3 chapters on practice organization. This is not a book with just a bunch of drills. Stewart ties them all together and gives you the buzzwords to use in practice.

What O-Line book talks about weight training specifically for the Big Guys? And Stewart breaks down pass protection so well it takes up 6 chapters. Buzz words and Homer's Dairy are part of our practice now. Excellent book. And Stewart emails you right back with any questions.

This book was fantastic. Everything was broken down & explained perfectly. Best offensive line book I’ve read. I am glad I purchases it! Must have for any OL coach. Well worth the money. I highly recommend it.

Very in-depth information on the most important group on the field!