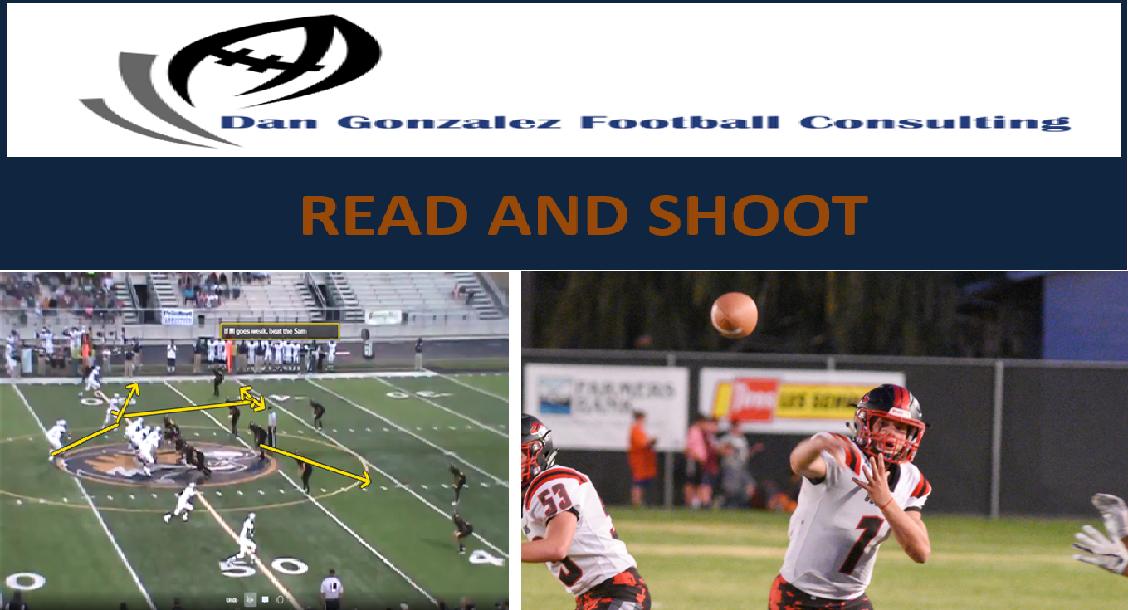 The ability to give "packaged sides" is a critical component in supplementing a progression-read passing game.  Here, Coach Gonzalez covers philosophy, protections, and both whiteboard and video examination that will allow your team to successfully create half-field pass patterns for your passing attack.

In eleven seasons as a college and high school football coach, Dan Gonzalez has coached or recruited the single season or career passing leader at every school he has coached.   His career began when he was given the responsibility of handling passing game quality control during his senior season as a player at the University of Texas. After graduation, he served one season as an assistant at Ranger College, and then moved on to serve as the quarterback coach at Abilene Christian University for two seasons before returning as the offensive coordinator at Ranger College. Gonzalez then spent two years as the offensive coordinator at North Lamar High School in Paris, Texas. Making the switch from a wishbone offense to a multifaceted passing attack, North Lamar High School enjoyed back-to-back winning seasons for the first time in 20 years. Moreover, his quarterback, a converted safety, emerged as the 18th-ranked prospect in the nation. After two seasons, he joined the Lenoir-Rhyne University (formerly Lenoir-Rhyne College) staff in January 2002 as the quarterback and wide receiver coach and co-offensive coordinator. During his first season at Lenoir-Rhyne University, the team’s quarterback led the South Atlantic Conference in passing and set single-season school records for most yards, touchdowns, and completions. Three different quarterbacks in three seasons each netted top 10 passing seasons in the school’s record books, including the second- and fourth-best receiving careers in school history. He then returned for a second stint at ACU.  Gonzalez graduated from The University of Texas at Austin, where he played football for four years and lettered as a wide receiver on the 1994 Southwest Conference championship team. He has two Master’s degrees from Liberty University, including an MBA.  Gonzalez and his wife, Lori, reside in the Dallas suburb of Allen, Texas with their three children, and offers consulting services to high schools across the country, resulting in record-setting passing games, deep playoff runs, and state championships.

Dan goes into detail about how to take modern spread concepts and apply them in ways that are easy to understand for both coach and QB. Details include addressing protection, progression accelerators (mike read, 1 high/2 high), option routes from the slot or RB, and tailoring concepts to stress the defense. I really enjoyed the course and found the level of detail stimulating and thought provoking. I highly recommend this course to anyone looking to deepen knowledge and understanding of the spread passing game.

This is some great stuff to not only speed up progressions but help improve the QB's reading the field. Simple keys that can be taught early.

Great Course that really gives you an idea on how to cut the field in half. This excellerated by teaching to our QB's.

Excellent course with great video and breakdowns. I love Coach Gonzalez's approach to bringing variety to the passing game!

I thought I knew what I was doing in the passing game until I came across Dan's stuff. So glad I did. You'll never think about the game the same way, and you'll be a better coach to your QB if you implement with fidelity.

I have bought the books and I wish I had bought the course first. It was fantastic. Great job Dan. I will go back and read the book again now and it will make more sense. Awesome course

Great material! Diagrams and film as well. Ifyou want to learn the passing game or just simply get better at throwing the ball in your offense check out Coach's videos.

Breaking down a defense using these half field reads are a must watch!

Great course! Breaks every aspect down and shows different variations.

Scott Brisson - Vertical Pass Game and Compliments off of it by Lauren's First and Goal
Views: 1811
$19.95