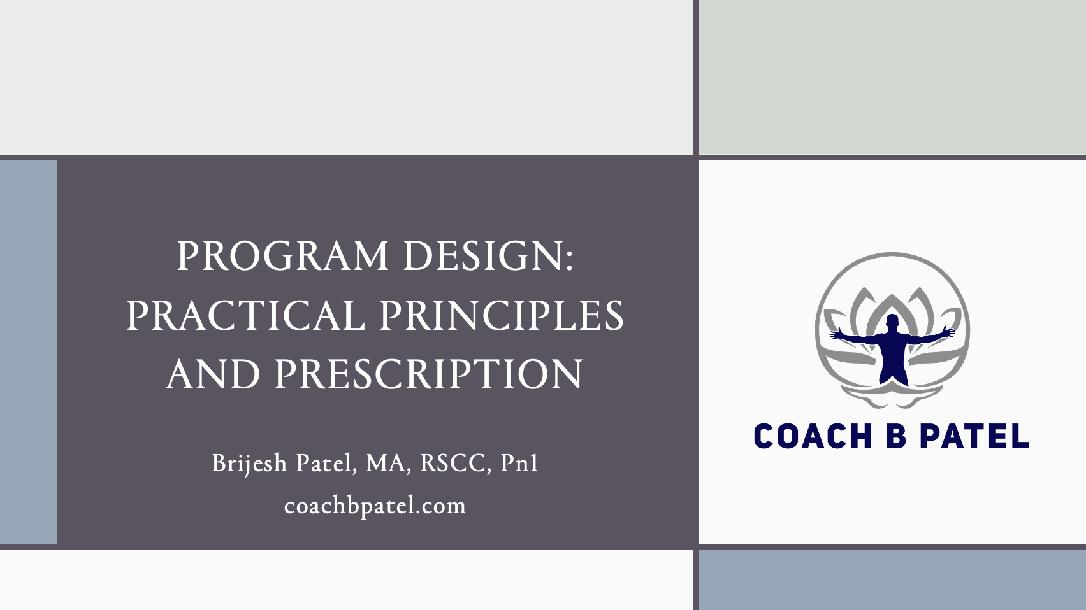 In this presentation, Brijesh will go over the principles that he uses in designing short term and long term programs for the athletes he trains and practical applications of how to apply them with your clients.

Coach B is a sought after speaker and consultant, as well as proving to be a mentor for coaches across all sports.  He currently serves as the Associate Athletic Director/Director of Athletic Performance at Quinnipiac University.  Coach B has built the strength and conditioning department from scratch, instilling his philosophy and approach to creating the best overall environment.  He prides himself in leading a department in which each student-athlete is given his or her own individualized program that is designed to improve movement skills, core strength, power, speed, strength, balance and flexibility.

Coach B has been instrumental in developing a culture of improvement and an attitude of success, while instilling a humble work ethic in those he works with.  His athletes have seen the benefit of Coach B’s teaching through all-conference recognitions, team championships, and the development into professional athletes. Coach B’s takes pride in helping everyone achieve their own personal success outside of the athletic arena.  His ability to see his athletes as people first has allowed him to foster and strengthen relationships with all who he works with.

In addition to his work with athletes, Coach B has played a tremendous role in the development of young strength and conditioning coaches.  He has been a mentor for them as they have grown into strong professionals in the industry.  He has gained great satisfaction in seeing young coaches develop into confident and impactful members of the strength and conditioning community.

Coach B has been nominated for the National Strength and Conditioning Coach of the Year award in 2016 and 2018.

Coach B is Level 1 & Level 2 certified through Reflexive Performance Reset (RPR) and is a Level 1 Nutrition Coach through Precision Nutrition. Patel also holds certifications from the NSCA, USA Weightlifting, the Red Cross and is also SPIN certified.

Coach B graduated with a Bachelor's Degree in Kinesiology in 2002 and a Master's Degree in Sport Management in 2004 from the University of Connecticut.