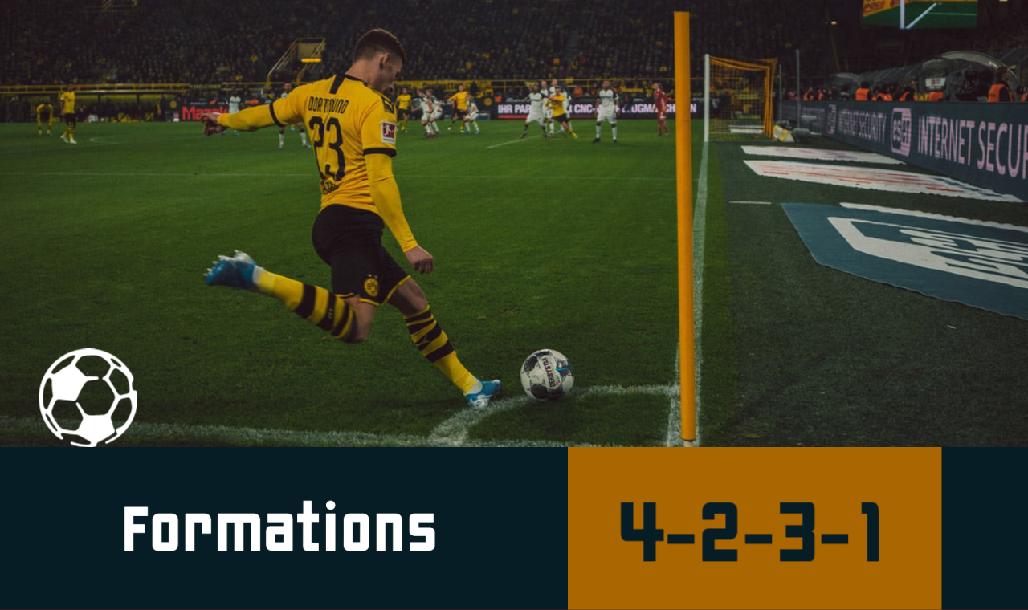 The  4-2-3-1 splits players into four bands. The defensive unit consists of the standard centre-backs and full-backs and two defensive midfielders screening them, often called the ‘double pivot'. The attacking unit consists of a band of three attacking midfielders and a lone central striker. The wide midfielders are generally fast dribblers who like to cut inside or make runs into the box. The attacking central midfielder, often the ‘No. 10', is normally a creative passer who can play balls into the feet of either the wide attackers or the lone striker.

A good 4-2-3-1 is a formation that has a wonderful ‘springy' quality - it absorbs pressure without breaking and then snaps back with surprising force.

In defence the 4-2-3-1 covers space very effectively, with the band of three and the lone striker able to press the opposition high up the pitch while the two defensive midfielders ensure that there is no space left in front of the defence. Then the back four can either play a high line, compressing the space even further, or drop deeper as preferred.

Coach Fredy Sanguinetti graduated from University of Texas Pan American (now UTRGV) in 1991 with a B.S. in Spanish, a minor in English. He then went on to play soccer professionally on international teams and in Houston while also working as a Spanish,ESL, Physical Education and Teen Leadership teacher. He has coached Volleyball, Football and after 17 years of coaching boys’ soccer, he became the girls’ soccer coach at Cinco Ranch High School.

Originally from Uruguay, South America, Fredy Sanguinetti has been involved in soccer, as a player at every level and a coach. He is just as passionate about teaching in the high school classroom as he is on the soccer field. After 11 years at the helm of a Cinco Ranch girls program that he established as a perennial state powerhouse, Sanguinetti is back coaching boys.