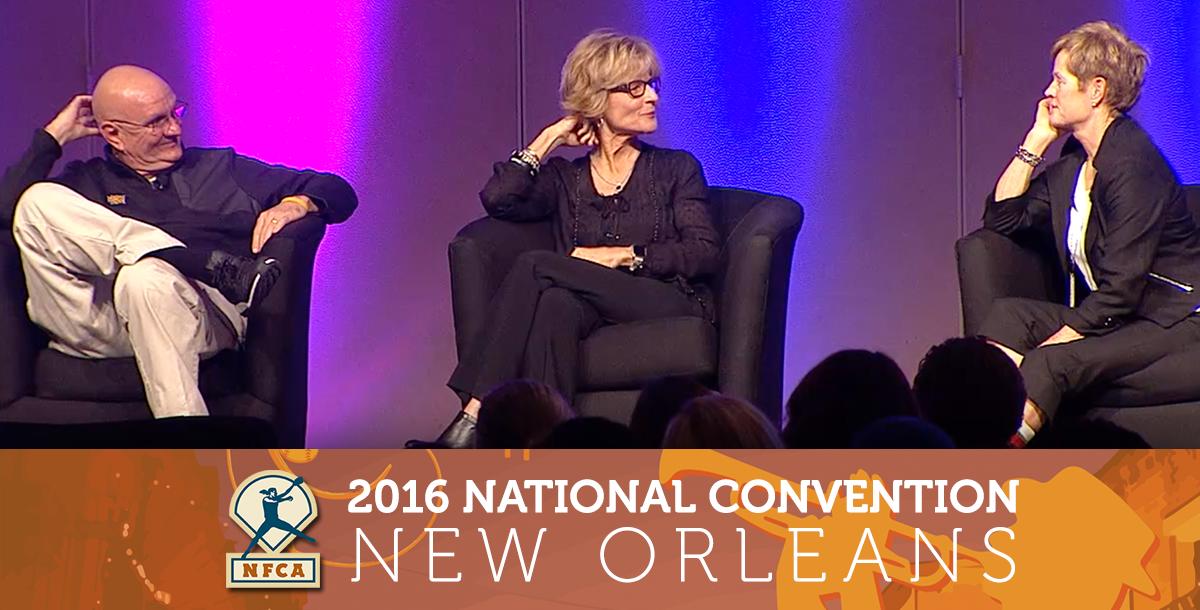 Sue Enquist is UCLA Softball’s ﬁrst All-American, National Champion, and Hall of Famer. In 2006, Enquist concluded her storied 27-year career as head coach of the UCLA Bruins with a 887-175-1 (.835) record, making her the winningest softball coach among all active coaches at the time. She is the only person in NCAA Softball history to win a championship as a head coach and a player.

During her career, Enquist produced 65 All-Americans and 15 Olympians. She has been inducted into six Hall of Fames including UCLA, Women’s Sport Foundation, USA Softball Hall of Fame, and National Fastpitch Coaches Association.. Enquist is also the recipient of multiple National Coach of the Year and Pac-10 Coach of the Year honors.

NFCA Hall of Famer Scott Whitlock is in his 31st year as a member of the Kennesaw State Department of Athletics, 23 (1991-2013) of those spent as the program's head coach, and the last three exclusively as the senior associate athletics director.

During his illustrious coaching career, which concluded after the 2013 season, Whitlock garnered two national titles, 13 regional crowns and more personal accolades than can be mentioned. He was the driving force that made Owls softball one of the most admired and respected programs in the country.

After successful runs at the NAIA and NCAA Division II levels, Whitlock carried his success into Division I. The Bostwick, Ga. native compiled a 228-157 (.592) overall record in eight seasons at the Division I level including winning the Atlantic Sun Conference Regular Season Title in 2007 and 2012.

Legendary is a word that is often overused, but it is appropriate when describing Whitlock’s career. A total of 51 All-Americans can attest to that.

Whitlock guided the Owls to back-to-back Division II national championships in 1995 and 1996. In his 21 seasons coaching fastpitch, Whitlock compiled an overall record of 997-296 (.771), placing him near the top in most NCAA softball coaching categories.

While at the helm of the Owls, Whitlock produced 18 consecutive 35-win seasons from 1991 to 2008; he had fifteen 40-win campaigns and four seasons in which his clubs won 50 or more games. Additionally, Whitlock led the Owls to nine consecutive seasons (1992-2000) in which they never lost more than a single-digit number of games. Every year from 1991 through 2002, Whitlock led the Owls to a final top 10 national ranking.

For his lifetime of hard work, dedication and success, Whitlock was granted the highest honor of his profession when he was inducted into the National Fastpitch Coaches Hall of Fame in Orlando, Florida in 2005. He also was honored with induction into the Georgia Dugout Club Hall of Fame in 2010.

Sandy Jerstad, inducted into the NFCA Hall of Fame in 2000, compiled a win-loss record of 1,011-359-2 in 27 years of coaching, all at Augustana College in South Dakota.

She guided the Vikings' program from its infancy to national prominence, winning the NCAA national softball championship in 1991. When she retired after the 2003 season, she ranked second all-time in wins among NCAA softball coaches, regardless of division.

Her team won eight North Central Conference championships and played in 16 NCAA regionals and three NCAA Division II national tourneys. In their national championship year, the Vikings went 61-4-1 and set school records for wins and winning percentage. Augustana also was runner-up in 1993. Twenty-nine of her players were named All-Americans.

Jerstad grew up in Virginia, Minn., and met her future husband, Mark, while attending St. Olaf College. The two were married for 31 years and had three children (Rachel, Mike and Sarah) before Mark's untimely death from cancer in 1997.

Jerstad graduated from St. Olaf in 1966, and went on to get a Master's degree in Health, Education, and Recreation from South Dakota State University in 1980. She earned a doctorate in Educational Administration from the University of South Dakota in 1994. She currently sits on the board for the Good Samaritan Society (2003-present) and the Center for Western Studies (2005-present).

She served one term as a South Dakota state senator, representing District 12.