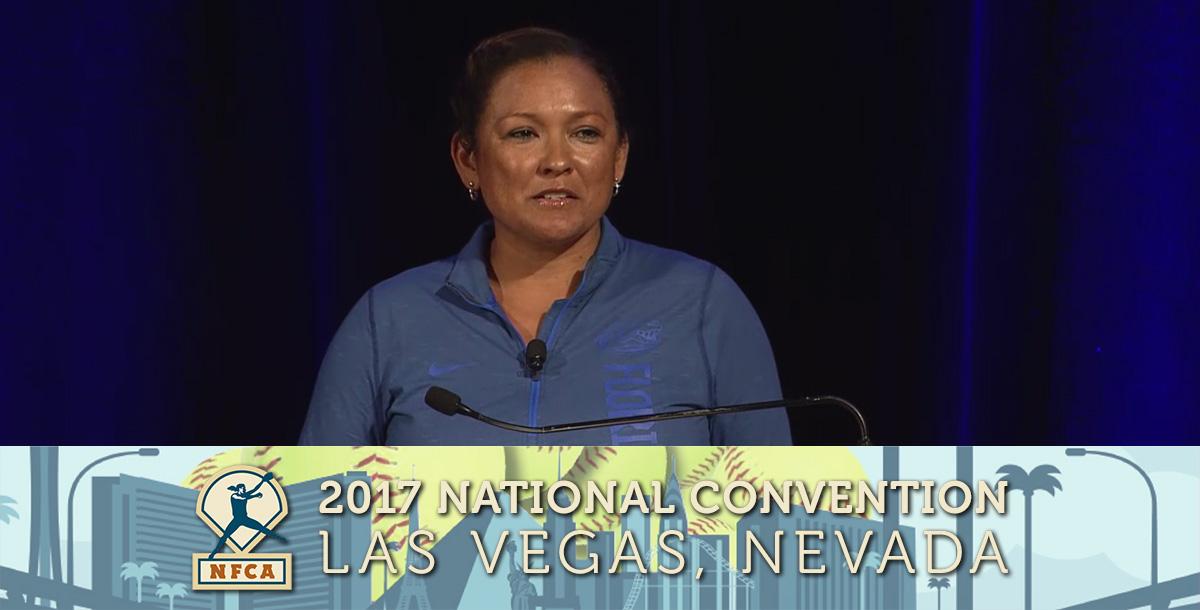 Having completed her 20th season as a full-time coach, Melyssa Lombardi continues to guide the Sooner pitchers and catchers to even greater accomplishments. Lombardi was promoted to her current position of associate head coach in July 2007.

A former all-conference catcher for the Sooners, Lombardi has also coached the Oklahoma battery to a combined 19 All-America honors, 36 All-Region accolades and 75 All-Big 12 honors during her time in Norman.

The 2017 season featured one of the deepest staffs in program history as three pitchers threw at least 100 innings and all five members of the staff had ERAs at 2.08 or lower. The staff ERA was 1.55 on the season with 510 strikeouts in 482.2 innings and an opponents' average of .177.

Paige Parker continued her career with another All-American season and her third straight season being named Big 12 Pitcher of the Year after posting the lowest ERA (1.43) and best strikeout rate (8.72 per 7 IP) of her career. Junior Paige Lowary transferred from Missouri and was named an All-Big 12 First Team honoree as she emerged as a dominant relief pitcher. With 11 saves on the year, Lowary had more than any team previously recorded in OU history and she tied for fifth in NCAA single-season records. Freshman Mariah Lopez went 18-1 on the season with 109 strikeouts in 101 innings and threw a no-hitter. Fellow freshmen Nicole Mendes and Melanie Olmos rounded out the staff by giving up just two runs in 24.2 combined innings.

Jennifer Rocha has made a name for herself as one of the top pitching instructors in the country. In her 12 seasons at Florida, Rocha has tutored seven All-American hurlers in Stephanie Brombacher, Stacey Nelson, Hannah Rogers, Lauren Haeger, Delanie Gourley, Aleshia Ocasio and Kelly Barnhill. In four of the last 10 years, the Gators have turned in the top team ERA in the country and in 2017 the staff posted a 0.81 ERA which is the second best in program history.

Rocha was instrumental in the development of a pair of NFCA All-American hurlers in Delanie Gourley, Aleshia Ocasio and All-Southeast Region third team selection Kelly Barnhill. During the offseason the trio earned spots to play at the international level with Team USA (Gourley & Barnhill) and Puerto Rico (Ocasio).

In addition, Rocha was named the 2015 NFCA Assistant Coach of the Year. It was the first honor of its kind received by a UF coach in program history.

After tutoring both Nelson, Brombacher and Rogers to successful careers in Orange and Blue, Rocha led Haeger to becoming the best pitcher in the country in 2015.

Rocha made the trip to Gainesville with head coach Tim Walton, as the two have worked together for a decade.  Under Rocha, the Wichita State pitching staff set several school records and posted an earned run average of under 2.00 in back-to-back seasons. Their 1.46 ERA in 2004 was the lowest in program history. The pitching staff struck out over 400 batters in each Rocha’s final two seasons, with one individual recording over 200. In 2005, the Shockers’ top pitchers registered records of 20-8 and 22-8 and each had a 1.52 ERA in 202.1 and 180.0 innings pitched.

From Weapons to Tools: A Modern Approach to Student-Athlete Surveys with Matt Davidson P.h.D., and Jessica Allister by National Fastpitch Coaches Association
Views: 2214
$5

You just booked "Creating a Championship-Caliber Pitcher with Jennifer Rocha"