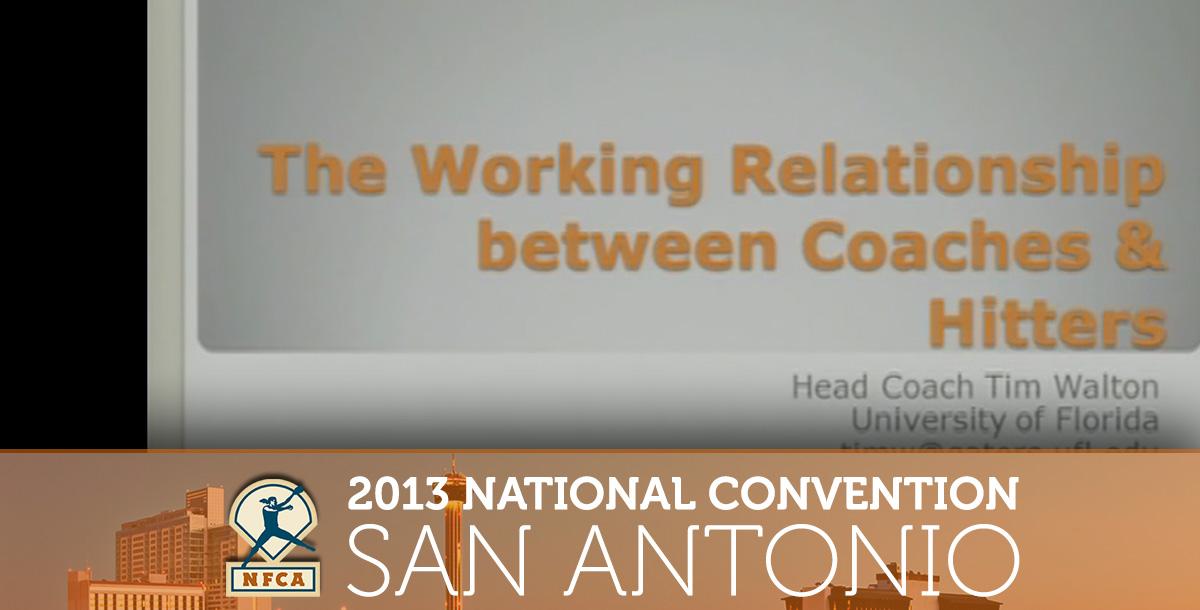 The The Working Relationship Between Coaches & Hitters

1 The Working Relationship Between Coaches & Hitters 0:00

Head coach Tim Walton has changed the face of Florida softball since his first season in 2006, establishing the program as a national powerhouse in just eight years at helm of the Gators squad. Under Walton’s tutelage, the Gators became the first Southeastern Conference institution in history to earn four consecutive Women’s College World Series berths, as Florida’s 2011 team worked its way to a second WCWS Championship Series appearance, its second in a span of just four years in Oklaoma City.

In his eight years at Florida, Walton has led the Orange and Blue to countless school and SEC records, as his squads have earned numerous firsts for the Gator softball program.

In 2013 the Gators swept the SEC regular-season and tournament crowns on the way to a berth in the Women's College World Series. In 2011, UF advanced to an unprecedented fourth straight WCWS, including its second trip to the Championship Series. A four-time SEC Coach of the Year, Walton has led the Gators to the NCAA Tournament every year of his tenure, hosted Regionals all eight times and played host to NCAA Super Regionals five times.

Walton, the third head coach in the history of the Gator program, came to Florida from Wichita State University in Wichita, Kan., where he had been the head coach for three seasons. In 2005, Walton led the Shockers to their first NCAA Tournament appearance in 16 years as they earned the first at-large bid in school history.

He began his tenure at Wichita State with a bang in 2003. The team put together one of the best turnarounds in the nation that year, improving its 2002 record by 18 wins to a 39-20 overall record. The Shockers’ 39 wins was a school record at that point.

Walton has been a part of national championship teams as an assistant softball coach and as a baseball player, both for the University of Oklahoma. Before heading to Wichita, Walton served as an assistant softball coach for the Sooners, as the hitting coach and outfielders coach. In his four seasons at OU, the Sooners won three Big 12 titles and made three consecutive WCWS appearances, including winning the 2000 NCAA title.

He played baseball for two years at Cerritos Junior College in his hometown of Cerritos, Calif., before transferring to Oklahoma. Walton made two trips to the College World Series as part of the Sooners pitching staff, earning the win in the 1994 national title game in a 13-5 victory over Georgia Tech.

Walton hit the national softball coaching scene in 2010 when he was honored by the USSSA Pride of the National Pro Fastpitch (NPF) professional softball league by being named head coach of the Florida Pride (Orlando). Walton led the Pride to the 2010 NPF Championship title – the championship victory and NPF trophy was the first ever in Florida Pride history. Walton’s 2011 squad won the 2011 regular-season title en route to the runner-up spot at the NPF Championship, while the coaching staff earned 2011 Coaching Staff of the Year honors.

After graduating from Oklahoma with a degree in history, Walton played with the Philadelphia Phillies minor league organization from 1995-97.