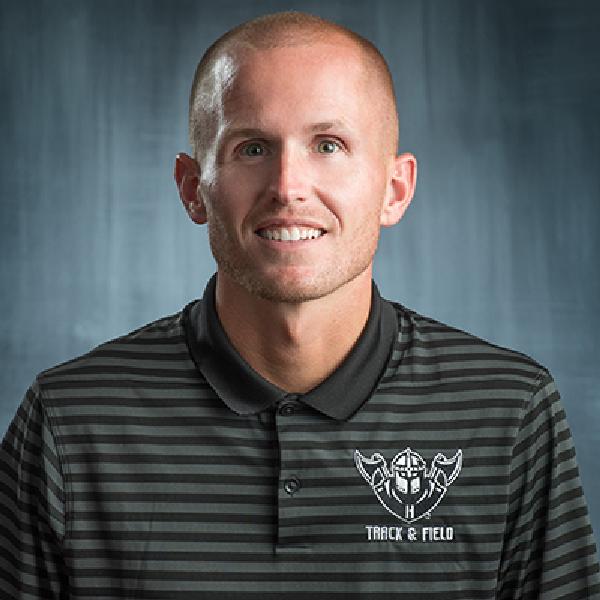 Head coach Brent Ewing begins his fifth year as head coach of the Indian HIlls running programs in the 2022-23 academic year. Ewing oversees the college's men's and women's cross country programs as well as the men's and women's indoor and outdoor track & field programs. Ewing, who previously served as an assistant coach for the Warriors for one year before taking over the program, has helped guide the program to both a national and international platform.

The 2020-21 Iowa Community College Athletic Conference (ICCAC) and 2020-21 Midwest Region Coach of the Year, Ewing is responsible for 113 All-Americans, including a remarkable 42 honorees in 2020-21 alone between cross country and indoor and outdoor track and field. While the honors stand out, the path Ewing has placed student-athletes on leaps in comparison. 74 student-athletes have gone on to sign letters of intent with major four year universities. The class of 2021 sent 10 student-athletes to NCAA Division I programs and seven to NJCAA Division II programs.

The pinnacle of the running program reaches the Olympic level. Ewing's recruitment of Kenny Bednarek to Indian Hills led to two National Junior College Athletic Association (NJCAA) DI National Championships. Indian Hills catapulted Bednarek to a professional contract and ultimately a spot on Team USA for the 2020 Tokyo Olympics where Bednarek dashed to a Silver Medal.

The program's climb has led to numerous individual and team accolades along with impressive records at all levels. In 2021, Jackson Burnett was tabbed as the ICCAC and United States Track and Field & Cross Country Coaches Association (USTFCCCA) Regional Track Athlete of the Year while Damoy Allen was named to the 2021 ICCAC Outdoor Track Athlete of the Year. The men's 4x100-meter relay team broke the NJCAA Region XI meet record with a time of 39.90. The men's 4x400 relay team also broke the NJCAA Region XI record with a time of 3:08.63.

The stellar 2021 track season resulted in a 9th place finish for the men at the NJCAA Indoor Track & Field National Championship, the best in program history, followed by a 10th place finish at the national outdoor meet. The women also boasted a top program finish at the indoor meet, finishing 19th overall.

The running program has also shown success in the classroom. Most recently in the 2020-21 academic year, 16 student-athletes received top academic honors from the NJCAA, including Ethan Messenbring and Lauren Upmeyer who were named to the NJCAA All-Academic First-Team for achieving a 4.0 GPA throughout the academic year.

Ewing has enjoyed success at Indian Hills by building up the number of student-athletes in both sports and helping them to record-breaking times and distances.

Ewing helped develop the only three All-Americans in IHCC cross country history in 2018, with Marcus Graham and Michael DeMeyer, and in the fall of 2020 with Nick O'Connor, all achieving that distinction. After setting an all-time best finish of 15th at the 2018 NJCAA national meet, the 2020 edition of the Warrior harriers shattered that mark by taking 7th at the national finals. The women's team was 20th at the 2016 nationals for their top finish ever.

Ewing has been a key recruiter responsible for a growing track & field roster at Indian Hills, including a 2021-22 class of more than 80 student-athletes.

In 2019, the IHCC head coach was one of 45 coaches invited to the USATF Emerging Elite Coaches Camp at the Chula Vista Olympic Training Center in California.

Ewing arrived at Indian Hills after serving as a graduate assistant coach in cross country and track and field at Truman State University in Kirksville, Mo. At Truman, he helped train six athletes in six events to 11 NCAA Division II qualifying performances and guided athletes to 20 top-three finishes at the conference championships, producing two conference champs and one national qualifier. In cross country, Truman finished fourth at the conference meet in 2016 and the men's squad had two high conference finishes, including a four-place improvement in 2014 with Ewing on the coaching staff.

Ewing earned his master's degree in leadership at Truman State and his bachelor's in health and exercise science at Central College in Pella, Ia., where he was a member of the cross country and track and field squads. He helped the Dutch to the NCAA DIII Cross Country national championships twice and Central's two highest team finishes came with Ewing on the squad. He garnered DIII all-region honors in 2012 and was a two-time all-academic selection by the USTFCCCA.