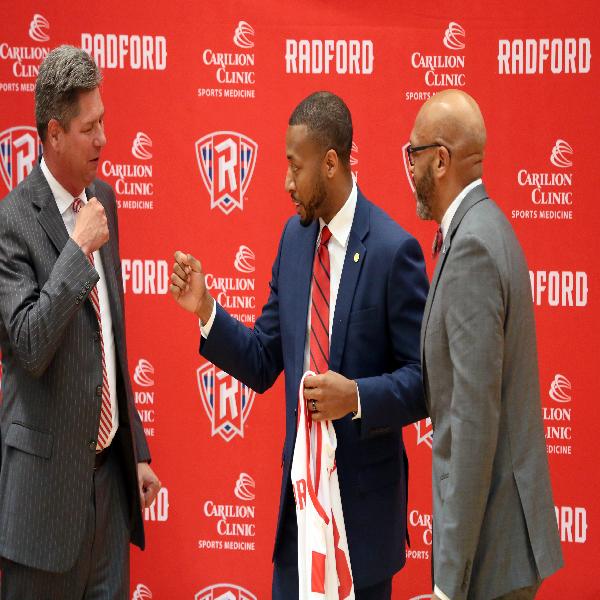 "Darris is many things. A former great player, a leader, a great teammate, an old soul, a consistent grinder, an ethical worker, a commanding presence on the court and an awesome human being. It's a big-time hire by Radford! He's more than ready to come home."
– Mike White, Florida Men's Basketball Head Coach

"Congratulations to Darris. I'm extremely proud of him. I've always known he was going to be a head coach, basically when he knew all the sets better than I did. I want to wish him good luck, and I'm hoping he'll come to Morgantown and see us, along with his team."
– Bob Huggins, West Virginia Men's Basketball Head Coach

Darris Nichols is a lot of things. He is a wonderful man. He is an excellent basketball coach and will be a terrific ambassador, not only for Radford University basketball but for Radford University as a whole. I've known Darris for many years. I've had the opportunity to work with him back in 2014. His mother and father are exceptional people. I know he's thrilled to have the opportunity to be a Division I men's basketball head coach and do it in a city that he's very familiar with. I'm happy for him and for Radford University. He's going to do an excellent job, and I look forward to following his progress."
– Mike Young, Virginia Tech Men's Basketball Head Coach

"Darris Nichols is a rising star in the world of coaching college basketball. We have remained in close contact from the time he played for us at WVU. He has always had a thirst to learn the game and was one of the smartest players I ever coached. His recruiting skills are exceptional, and he will bring the right people to Radford. Darris really knows the game and how to develop talent too. Student-athletes will love playing for him as well. This is a great match for both Radford University and Darris, and I look forward to following all his success in the years to come."

Playing Career (West Virginia University)
Member of the 2005 Elite Eight, 2006 Sweet 16, 2007 NIT Championship, and 2008 Sweet 16 teams
Holds NCAA record for most games played without fouling out (141)
Led the Big East in assist-turnover ratio in 2007
In the top five for most wins as a player in Mountaineer history
Played 1,282 minutes for WVU in 2008; only Jerry West played more in a single season in 1959