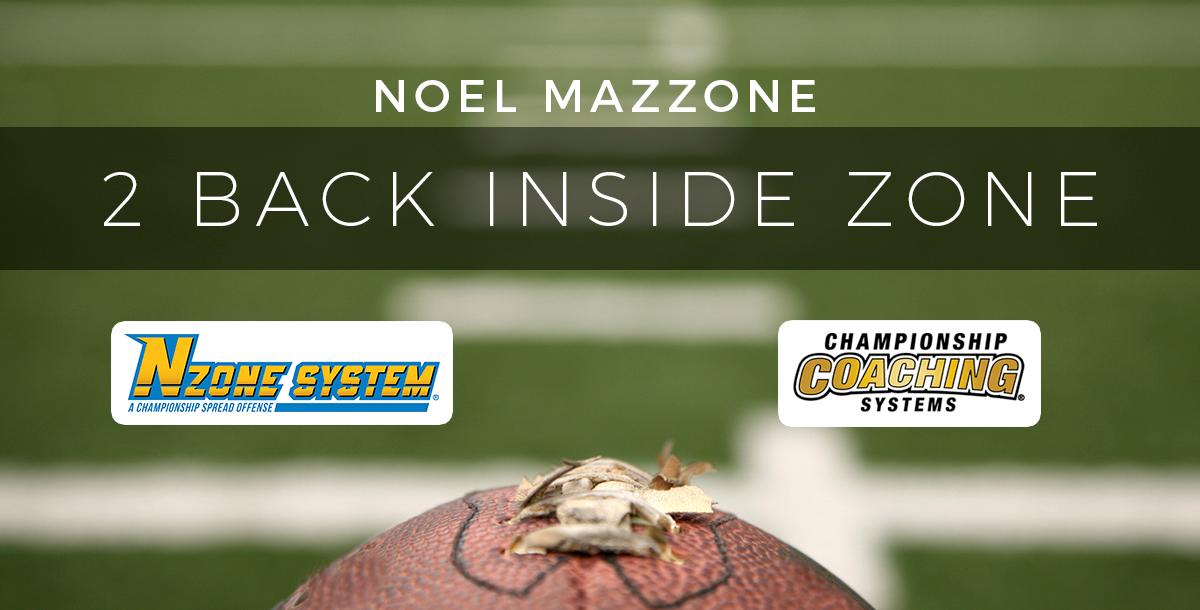 The Nzone offense is a comprehensive spread offense attack from the mind of Noel Mazzone that has churned out yards and scored points in “Big Time” college football all over the land, from the Swamp in Gainesville, Florida to the Palouse at Wazzu. One of the tenets of this offense is an aggressive zone rushing attack. Unlike other spread systems, this rushing attack can really get after a defense by employing a two-back attack. Join David Marsh, a long time Nzone assistant coach and system guru, as he covers every aspect of the two-back zone rushing attack in this clinic.

Offensive Coordinator in the Southeastern Conference

Noel Mazzone was the architect of the UCLA Bruins' high scoring and high flying offense for four seasons prior to moving on to his current post in the vaunted Southeastern Conference. Mazzone's impressive coaching resume includes time as an assistant coach in the NFL and as an offensive coordinator in the Atlantic Coast, the Big Ten, the SEC and the Pac-12 Conferences. During the 2015 season, UCLA set a school record for most 500-yard total offense games with six. Quarterback Josh Rosen, the Pac-12 Offensive Freshman of the Year, set numerous school passing records and ranked among the nation's top 25 passers in completions per game (22nd), passing yards (19th) and passing yards per game, (21st). He also established a new school mark with 245 passing attempts without an interception. Receiver Jordan Payton became UCLA's all-time leading receiver. Devin Fuller moved up among the top six on that all-time receptions list and Thomas Duarte shot into the school's top 20 for career receiving yards and top 10 in career TD receptions. Running back Paul Perkins produced the first back-to-back 1,000-yard seasons since DeShaun Foster in 2000-01. The big numbers kept coming for Mazzone's offense in year three at UCLA. Brett Hundley became the school's all-time leader in total offense (11,713) and touchdown passes (75). He also was the first UCLA quarterback to throw for at least 3,000 yards in three different seasons. The redshirt junior, who was selected by the Green Bay Packers in the 2015 NFL Draft, ranked fourth in the NCAA in completion percentage (.691) and 13th in passing efficiency (152.7). Perkins led the Pac-12 in rushing and became the 13th Bruin back to reach the 1,000-yard milestone for a season. His total of 1,575 rushing yards was the second-highest in school history. The offense tied the school mark with five games of 500-yard total offense. Receivers Payton (67) and Fuller (59) each ranked among the school's top 10 all-time in single-season catches. In 2013, the team set school records for total offense (692 yards) and first downs (39) in the New Mexico State contest. A school record 26 players caught a pass during the course of the season. Hundley ranked among the nation's top 25 in completion percentage (14th-.668), passing efficiency (20th-152.9), touchdown passes (23rd-24), points responsible for (14th-216), points responsible for per game (18th-16.8), and total offense (23rd-293.8). Shaq Evans finished his career ranked tied for 10th on the all-time school receptions list and tied for ninth on the single-season touchdown reception list. Hundley also produced the third-most rushing yards by a quarterback in school history. Running back Jordon James posted career-best rushing totals and three 100-yard games. Mazzone's first season on the field with the Bruins quickly turned into a record-setting campaign. Senior running back Johnathan Franklin established new school marks for career rushing yards (4,403 yards), career all-purpose yards (4,925), single-season rushing yards (1,734), single-season 100-yard rushing games(9) and single-season all-purpose yards (2,062). He was selected in the 2013 NFL Draft by the Green Bay Packers. Also in 2012, Hundley set records for single-season passing yards (3,740), single-season completions (318) and single-season total offense yards (4,095-fifth on the all-time Pac-12 list). In addition, he became the first UCLA quarterback to throw for over 300 yards in three straight games. Team records were also achieved for most yards in a season (6,531), most points scored in a season (482), most passing yards gained in a season (3,860), most first downs in a season (331) and most points scored in a quarter (30). Mazzone went to UCLA from Arizona State where he served in 2010 and 2011. Mazzone worked on the professional level from 2006-08 as the wide receivers coach with the New York Jets and worked the 2009 season as a personnel consultant for the franchise. Prior to his professional experience, Mazzone coached in college football working with quarterbacks, running backs, receivers and tight ends and coordinating offenses for Ole Miss, Auburn and North Carolina State. He also worked on the collegiate coaching staffs at Oregon State, Minnesota, TCU and Colorado State after getting his start as a graduate assistant in 1980-81 at the University of New Mexico. He served as a high school assistant coach at Boulder High School in Boulder, Colorado as well. Mazzone is a native of Raton, N.M., and he graduated from New Mexico in 1980. He played quarterback for the Lobos and led the team in passing in 1976 and 1977.

Great Stuff. Coach Mazzone is one of the most brilliant minds in college football.

Some good informational nuggets. Not all I was hoping for though.

Great content for those looking for some true Xs and Os

Running Inside Zone in The NZone Spread Offense by Nzone Football
Views: 5277
(2) $20

You just booked "2 Back Inside Zone"