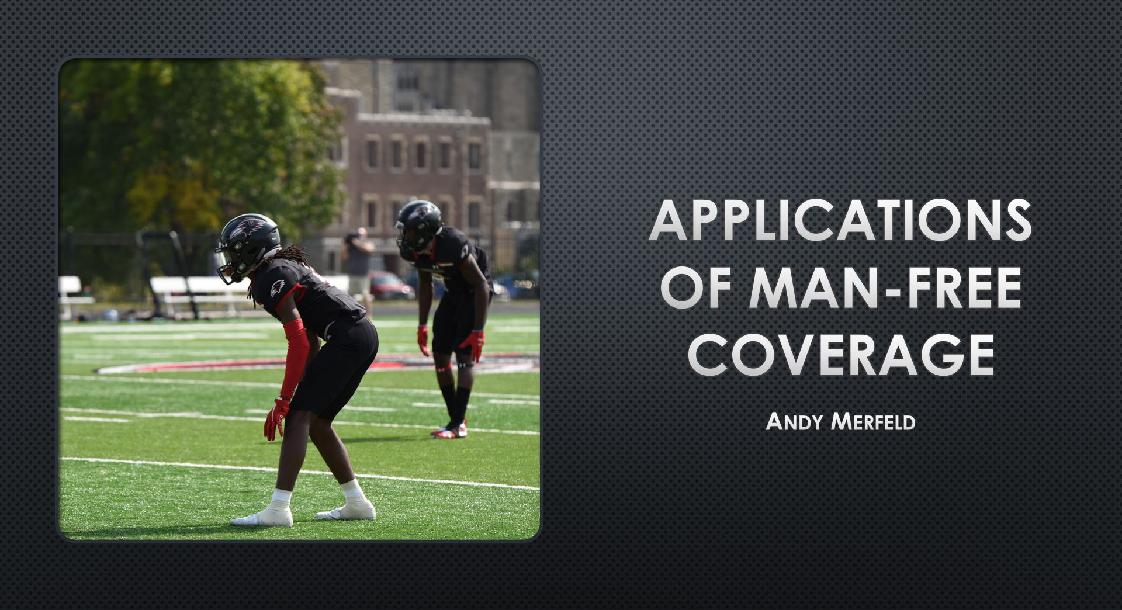 Playing great defense always starts with defending the middle of the field. In the modern game, defenses need to be sound against the RPO game on early downs while still being able to play tight coverage to get off the field on third downs. They need to be able to bring pressure without selling out, and they are still limited in terms of teaching and practice time. What if there was a coverage that checked all those boxes - a coverage that can be played in any situation against virtually any formation?

Coach Merfeld is here to tell you that man-free coverage can give you all of the above, and more. When you play man-free coverage, you help your defense eliminate big plays by properly defending the middle of the field. You also keep your players out of run/pass conflict by allowing them to aggessively "fit their coverage." Defenders can play confidently against RPOs, knowing that a box players aren't needed to help cover detached receivers and a defenders playing man on a detached receiver will never need to fit an interior gap.

This is the second course in Coach Merfeld's Man-Free Coverage Bundle. In the first course, he focuses on the foundations of the coverage, position maintenance and using the help in the middle of the field, different coverage roles and combos, man coverage technique in the slot. The first course focuses more on pass defense, while this second course ties it all together with different coverage rotations, run support, pressures, and adjustments.

In the first part of this course, Coach Merfeld goes into an in-depth analysis of different man-free rotations and variations. He goes through their specific uses, including pros and cons of each coverage rotation. He ends this section by discussing some game-planning thoughts on using man-free coverage vs. 11/20 personnel and 12/21 personnel.

He then focuses on run support in middle of the field closed coverages, with a special emphasis on man-free. He shows game examples of different man-free variations from both base and sub defensive personnel and using even and odd spacing with the defensive front. Coach Merfeld shows how to get safeties involved in the run fit, how to "key" versus moveable gaps in the backfield, how to allow players to marry their run and pass responsibilities by fitting their coverage, and run fit concepts from both even and odd spacing.

In the third part of the course, Coach Merfeld focuses on man-free pressures: simulated pressures with a four-man rush, five-man pressures from both base and sub personnel, and six-man "peel" pressures.

In the final few lessons of the course, Coach Merfeld covers different formation, split, and motion adjustments within man-free. He discusses matching up vs. empty formations and how to handle offenses putting the formation into the boundary. In the lessons on split adjustments, he teaches how to cover different 2- and 3-man receiver alignments with and without the shallow rat. Finally, in the section on motion adjustments, he discusses how different defenders account for receiver and running back motions.

Also included are the Powerpoint slides Coach Merfeld used in his presentation. They can be downloaded and edited to fit your needs. This course is a great value, with over four hours of in-depth material that will help you implement everything you need within the man-free coverage world!